One of the great larger-than-life figures of the Western movie was the rollicking Raoul Walsh. Albert Edward Walsh (Raoul was a much more dashing name he invented for himself) was born in New York in March 1887 and died in California in December 1980 aged 93.

He started as an actor and/or director in the early silent days, directing, while still in his twenties, the short Who Shot Bud Walton? in 1914.

Walsh learned his craft with DW Griffith, serving on The Birth of a Nation as actor (John Wilkes Booth), editor and assistant director. He took part in two films about Pancho Villa and is portrayed by actor Kyle Chandler in And Starring Pancho Villa as Himself (2004), a rather good HBO movie.

He would have been The Cisco Kid in 1928 but a jackrabbit jumped through his car windshield, causing him to lose an eye and the part and to wear that piratic eyepatch for the rest of his life – like André De Toth. (John Ford and Nicholas Ray adopted them too, even with two eyes). Walsh’s stand-in as Cisco, Warner Baxter, won an Oscar for his part in the movie. 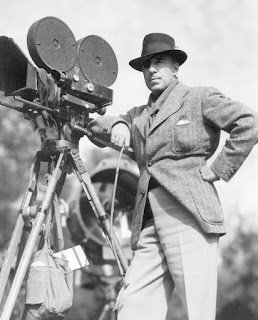 Walsh was still directing in the early 1960s, an extraordinarily long career that spanned silents, talkies and the modern age.

He was a masculine, not to say macho character and was famed for his fast, loud lifestyle. He was six feet tall and sported a slightly caddish mustache with the eyepatch. He was thrice married. He chuckled at what was said of him, that “your idea of light comedy is to burn down a whorehouse”. It is said that he borrowed John Barrymore’s corpse from a funeral parlor to frighten a drunken Errol Flynn. The very names of his pictures proclaimed the machismo. In the 1940s, for example, he directed Desperate Journey, They Died With Their Boots On, Manpower, The Strawberry Blonde, High Sierra, They Drive By Night, Dark Command and The Roaring Twenties. Even if you’ve never seen those movies you get a sense of them, and Walsh, from such titles.

In 1930 Walsh brought a Fox prop boy named Marion Morrison to the screen in the epic wagon-train picture The Big Trail, Walsh’s biggest picture so far, and gave him the name John Wayne. It was a huge film (released separately in German and Spanish versions) and extremely influential in the genre. But the Wall Street crash and subsequent depression did for epic pictures from Fox, and also did for John Wayne’s new-found stardom, which was not to revive seriously until John Ford, a director who greatly admired Walsh (almost wanted to be him) used Wayne in Stagecoach at the end of the decade, and pretended that he, not Walsh, had ‘discovered’ Duke. 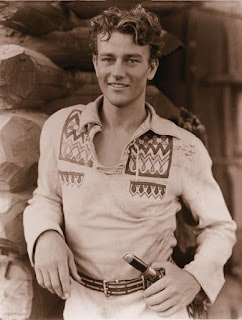 Walsh made no Westerns in the 1930s but he directed Wayne again for Republic in their first ‘A-picture’, Dark Command, 1940, then two years later Errol Flynn in possibly Walsh’s finest Western, the roistering Custer whitewash They Died With Their Boots On. Historical bilge, this is nevertheless a perfectly splendid picture.

Walsh and Flynn were amazingly compatible. In 1945 Walsh directed parts of San Antonio, in which Flynn did more Western swashbuckling. The credited director was David Butler but Walsh did the serious helming. It’s a fun Western. 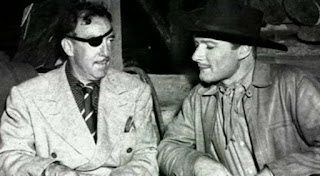 In 1947 Walsh directed two Westerns for Warners, Cheyenne and Pursued.

Cheyenne starred Dennis Morgan, who did a series of usually comic and/or musical Westerns in the 1940s and 50s. The story of Cheyenne featured Arthur Kennedy as the Sundance Kid. Pursued was an excellent psycho-Western in 1947 with Robert Mitchum. I imagine Walsh saying to Jack Warner, “Noir? You want noir? I can do noir.” It’s actually a great film.

In 1948 Walsh was back with Flynn in Silver River, not the best Western of either Walsh or Flynn but still a lot of fun. And in 1950 Walsh and Flynn teamed up for the last time in Montana, a sheepherder v. cattleman tale of an
Australian (Flynn, obviously) who brings sheep to Montana. It’s a bit routine, in fact.

Between these two Flynn pictures came Colorado Territory, a Western remake of Walsh’s gangster High Sierra. It starred a slightly miscast Joel McCrea (it would have been better with Mitchum) but it’s a top-notch Western.

In 1951 Walsh directed two leading Western actors, Gary Cooper and Kirk Douglas. Unfortunately, Distant Drums with Coop was a colorful farrago about fighting Seminoles in Florida. It really was a Warner dud and only Gary Cooper saved it from sinking for ever into the Everglades. Along the Great Divide, however, in which Douglas starred opposite an excellent Walter Brennan, was a better Western and is still worth a watch today. Walsh creates tension and menace.

Walsh thought Rock Hudson a hot property and kept him on contract, directing him in two cowboy movies in the early 50s, The Lawless Breed, (a rather dodgy John Wesley Hardin biopic, aka whitewash) and the quite gripping Gun Fury.

The later 50s were not the high-water mark of Walsh’s Westerns, I fear. In fact some of them were pretty weak.

Saskathewan was an 1870s ‘Canadian Western’ with Alan Ladd, never convincing in Westerns (not even Shane) but,
thanks to Walsh maybe, the picture is pacey and enjoyable.

Another famous actor who never did good Westerns was Clark Gable, and Walsh directed him in two in the mid-50s, The Tall Men, an overlong and boring affair, and The King and Four Queens, a poor ‘romance’. These pictures were so bad, in fact, that one wonders how they could be Raoul Walsh.

A very sub-Fordian cavalry Western, A Distant Trumpet, was Walsh’s last foray in the Western genre, in 1964. Sadly, it was only a distant echo of former greatness.

So not all Raoul Walsh Westerns were great, far from it. But there were enough really good ones to make him a key figure in the genre.

Walsh wrote an autobiography, Each Man in His Time: The Life Story of a Director.

Many film makers and actors have been influenced by Raoul Walsh. He was one of the Hollywood greats. As far as Westerns go, he’s up there with the best. 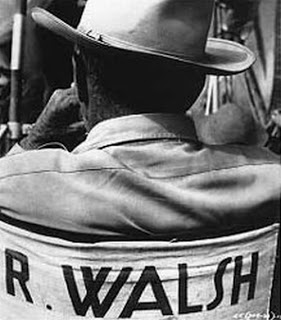 PrevPreviousThe Virgil Cole and Everett Hitch novels by Robert B Parker
NextWhat is a Western?Next

PrevPreviousThe Virgil Cole and Everett Hitch novels by Robert B Parker
NextWhat is a Western?Next
Jeff Arnold © 2022 – All rights reserved – Designed by BetterCallChris
Scroll Up