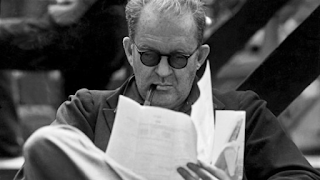 After the catastrophic commercial and critical failure of The Fugitive in 1947, John Ford (left) decided to concentrate on Westerns. They were more bankable and would help bail out his company Argosy Productions, which was now deeply in the red. In fact he made the best of it by saying that making Westerns “gives me a chance to get away from the smog, … to get away from this town [LA], to get away from people who would like to tell me how to make pictures. You’re working with nice people – cowboys, stuntmen, that kind of person. … It’s a great life, just like a paid vacation. I love to make westerns. If I had my choice, that’s all I would make.”
He was true to his word, making five Westerns in three years.
Fort Apache, the start of what would become a cavalry trilogy, was the first oater he made following The Fugitive, and, a fine film, it was a box-office and critical success. It was logical to follow up quickly with another. The new picture was to be a color remake of MGM’s 1936 talkie Three Godfathers and John Ford’s own 1919 silent Marked Men, and was to be called 3 Godfathers. All the versions were based on the sentimental Peter B Kyne magazine story published in 1913, about three outlaws redeemed by nursing an orphan infant.
.
. 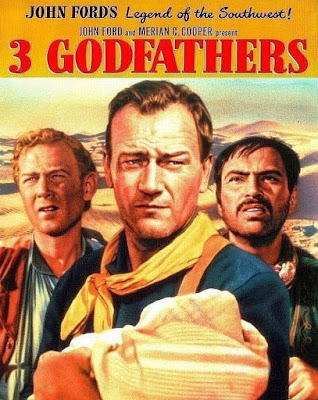 It brought out the sentimental Catholic in Ford
.
Ford and his partner in Argosy, Merian Cooper, wanted to make it themselves and get MGM to release it but MGM still held the rights from the 1936 version and anyway there was no way Argosy could raise the million dollars needed, so Ford and Cooper convinced MGM to finance it.
Ford got Laurence Stallings and Frank Nugent (Nugent had done Fort Apache) to write the screenplay. And he lined up some of his other regulars for the cast: John Wayne and Pedro Armendariz (both from Apache) along with Harry Carey Jr, son of the Carey in the silent movie, would play the titular trio, with Ward Bond as the pacific lawman chasing them, Marshal B Sweet.
.
. 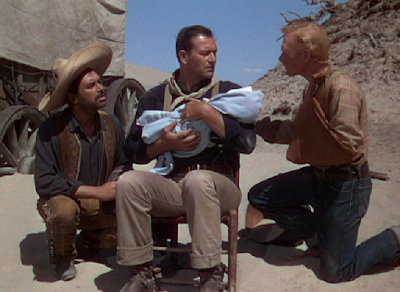 They muddle ineptly through
.
Other parts would be played by Ford stock company members such as Mae Marsh, Hank Worden, Jane Darwell, Ben Johnson and the director’s brother Francis Ford.
Ford first wanted the arty Gabriel Figueroa (of The Fugitive) as cameraman but when Mexican locations were ruled out he drafted in Technicolor expert Winton Hoch, then working on Joan of Arc for Victor Fleming. Hoch was a real artist who would earn an Oscar for the second of the cavalry trilogy, She Wore a Yellow Ribbon, and would also shoot The Quiet Man and The Searchers for Ford. His photography of the Death Valley locations on 3 Godfathers is magnificent. The shots of men walking or riding through the desert are remarkably beautiful and the barren, arid wasteland emphasizes the suffering as the three outlaws strive for redemption by following their star. It’s the best thing about the picture.
.
. 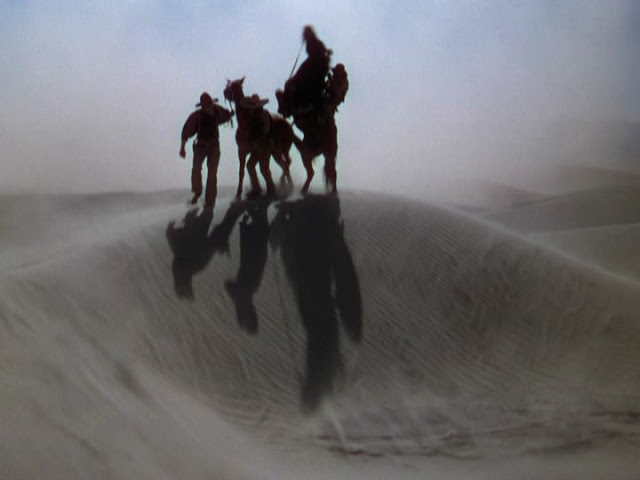 But the redemption angle is also the principal weakness of the film, for it is a sugary, even mawkish religious tale which drips in sentiment. Church music swells as Pedro Armendariz approaches the gothic arch of canvas on the wagon where the Madonna figure is to give birth on Christmas Eve. Harry Carey Jr is lit angelically as he looks skyward from his bible. John Wayne reads in a Gospel that he will find a donkey, and duly does. And so on. 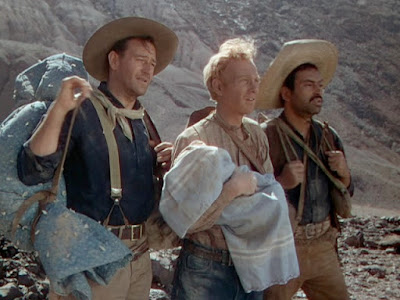 Ford usually had one actor whom he victimized and bullied, and this time it was Harry Carey. Nothing Carey did was right and all his scenes were accompanied by a running commentary of abuse and spite. Ford even resorted to physical abuse, kicking Carey and once throwing a rock at his face. Carey took it all with good grace, heaven knows how. 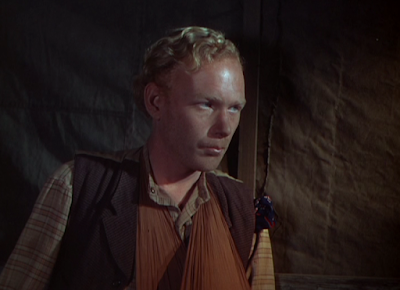 The Richard Hageman music starts with some nice orchestral arrangements of traditional American tunes (Streets of Laredo, Goodbye Old Paint and so on) but then often strays into sub-hymnodic slush. At least there is a snatch of the Stagecoach music for us to recognize early in the film as the diligence rolls into town. Carey sings a bit in a goodish tenor (luckily Wayne only has one line to sing before Carey takes over). The Carey and Amendariz characters come back as ghosts. There’s a choir to see Wayne off to jail. Darwell tells him that a year in Yuma will do him good. Realism isn’t this film’s strong suit. 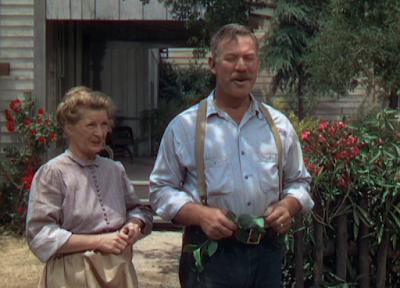 This movie is not high on the list of fine Westerns. Like all Ford’s work it has its moments, such as Wayne shielding the dying Carey from the sun with his hat, or the dripping tap wasting water as the bandits suffer from thirst, and photographically it is stunningly good, but it is schmaltzy in the extreme, the action mostly moves at the hobbling pace of the bandits in the desert and the gag of the three inept men caring for the new-born baby simply goes on too long. 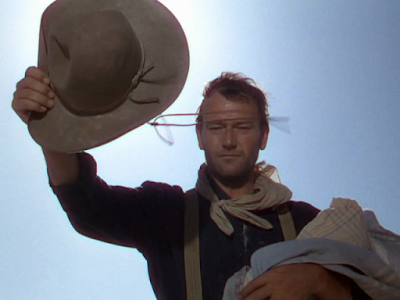 Coming straight after the gritty Fort Apache, this was a Ford regression into 1920s melodrama. In his biography of John Ford, Scott Eyman wrote, “Although 3 Godfathers has never had many critical adherents, it remains one of the director’s most affecting mid-range films; not overly ambitious, but on its own terms, remarkably effective.” I can’t agree. I prefer the opinion of the great Brian Garfield, who called it “a case of terminal treacle.” 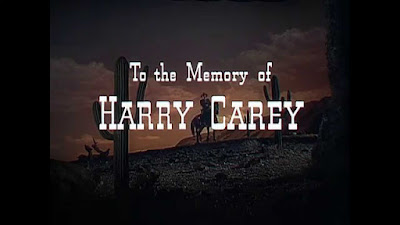 PrevPreviousA Texas Cowboy by Charles A Siringo
NextTwo Rode Together (Columbia, 1961)Next

PrevPreviousA Texas Cowboy by Charles A Siringo
NextTwo Rode Together (Columbia, 1961)Next
Jeff Arnold © 2022 – All rights reserved – Designed by BetterCallChris
Scroll Up