Every generation has to have its Jesse James movie, just as every few years there has to be a new Robin Hood, Zorro or Three
Musketeers. The list of pictures in which the Missouri thug appeared is
very long, going right back to the silent days when he was played by his son in
a hagiographical way in Jesse James Under the Black Flag. The big studios had their day – one thinks especially of
Fox’s Jesse James in 1939 with Tyrone
Power as Jesse and the studio’s remake in 1957 which bore the mendacious title The True Story of Jesse James, with
Robert Wagner being Jesse. There were Jesse James B-movies as well, of course –
Don ‘Red’ Barry’s junk 1954 picture Jesse James’ Women and the like. More recently we had the perfectly splendid The Assassination of Jesse James by the Coward Robert Ford, based on Ron Hansen’s fine novel, with Brad Pitt in the
role. But this list is far from exclusive. There were wagonloads of Jesse
movies.

In nearly all of them Jesse was a good
guy, a sort of Robin Hood of the West, or at the very worst a little bad but
understandably so – his poor family had suffered so. The villains were usually
corporate (the railroads were a favored target) or political. And it was Jesse
who was the central character. Elder brother Frank was usually little more than
a sidekick, or sometimes didn’t even appear at all. 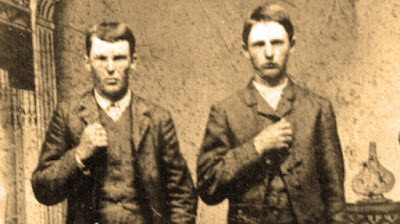 In this one, though, Frank James (Tim
Abell) is billed above Jesse and is definitely the boss. Jesse (George Stults)
is wild and headstrong but defers to Frank. I didn’t know Mr. Abell (he was
listed under ‘other crew’ as ‘voice’ in The Magnificent Seven remake and The Ridiculous Six but I suppose we all have to start somewhere) or Mr. Stults (this is his only Western to date). 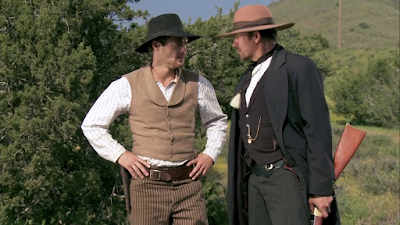 Top
billing went to Peter Fonda, as ‘Marshal Kane’ – though no Gary Cooper he – but
it was almost one of those vanity cameos, to get his name and photo on the DVD box,
because he only appears briefly three times, to say his lines dutifully. 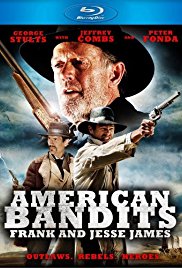 It got his photo on the box

It starts just after the Civil War. The
James boys already have a rep as bandits, and the law, in the shape of Marshal
Fonda and his deputy Burdette (Anthony Tyler Quinn, looking ever so slightly
like Jack Palance), are after them. The James gang attack a wagon carrying an
Army payroll and murder the escort of troopers, but Jesse is wounded and Frank
says they will meet up in a few days in a ghost town to divvy up the loot. It’s
not all that plausible, I fear.

Frank and Jesse stop in at a church
where the pastor (not sure of the actor) and his granddaughter Mary (Lauren
Eckstrom, very 21st century in appearance and diction), both Southern
sympathizers, give them shelter. Mary digs the bullet out of Jesse’s shoulder.

Next they go to a nearby town, also full
of Reb sympathizers, where the doc (Ron Harper) tends Jesse’s wound while Frank
sets off for the ghost town, now, however, inhabited by four odd types. There
are base coward Jed (Randy Mulkey) who will do anything to get hold of Frank’s
horse to escape the town, including pass over to him his wife/mistress Carrie
(Siri Baruc), who does in fact take a shine to Frank. There’s also slick
gambler Tyler (slick gamblers were obligatory in ghost towns), played by Ted
Monte, and a crusty ex-Confederate soldier, Otis (Michael Gaglio). There’s a
curious jump in the editing when these people appear. 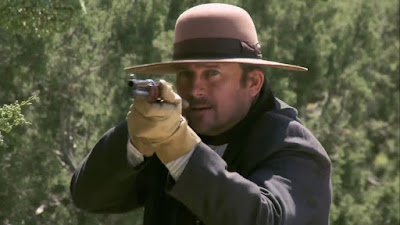 Well, Mary falls for Jesse right away,
going from never having seen his before to proposing to him in five minutes, so
both Frank and Jesse now have amours.
It’s highly improbable and not well written.

The rest of the James gang arrive, to
share out the loot. One of them, Ed Bass (Jeffrey Combs) wants to kill Frank
and Jesse and appropriate the contents of the strongbox all to himself. So a
showdown looms in the town, made extra showdowny when Deputy Marshal Burdette
shows up. There’s an extremely unlikely ending.

The picture appears to have been shot on
videotape and along with the occasional fades-to-black the whole thing has a
very TV feel to it. The acting is not, I fear, very professional. The actors
are all very evidently wearing costumes. There are Colt Peacemakers in the
1860s. I’m afraid amateurish is the word that springs to mind to describe the
whole show.

It was filmed in California but there
are, weirdly, scenes of Monument Valley intercut, presumably from some other
source.

It was produced, directed and written by
Fred Olen Ray (below), a former Z-movie horror king who has done five of these
Westerns. I haven’t seen the others. The budget was probably about 40 cents. 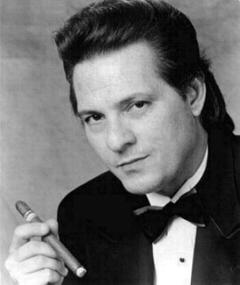 I suppose you have to watch it, once, as
part of the Jesse James canon. It’s better than those Don ‘Red’ Barry ones anyway.


I’m off now on a family holiday to Normandy, dear e-pards, so I won’t be posting for ten days or so. Have a happy Easter and don’t eat too much chocolate.

PrevPreviousThe Quick and the Dead (HBO, 1987)
NextJory (Embassy, 1973)Next
Jeff Arnold © 2022 – All rights reserved – Designed by BetterCallChris
Scroll Up