Quick on the draw

The fastest gun in the West

Two men walk slowly toward each other in the dusty street, stop and fix each other with steely stares. Their hands hover over the butt of the holstered six-shooter on the hip (or in later Westerns lower down the thigh). Tension mounts. Bystanders move nervously aside. The goody does the decent thing and waits for the bad guy to draw first. It will avail the villain naught, though, for as soon as he has started to pull his gun, the hero, with lightning speed, draws his own pistol and almost as part of the same movement fires it, the badman slumping to the ground wounded or killed. 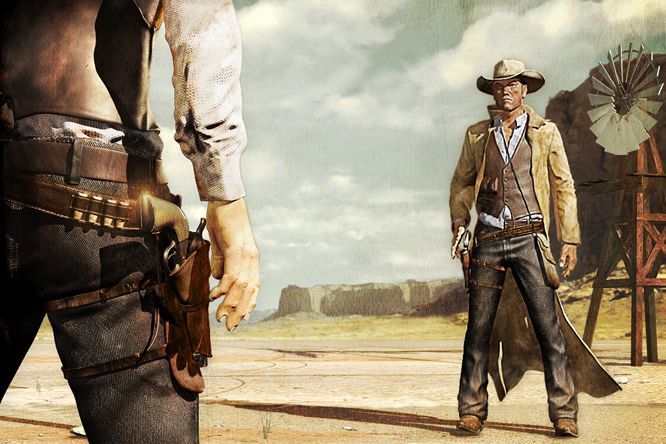 You may just possibly have viewed this scene before. In fact it is almost a cliché. The one-on-one quick-draw gunfight, often as the climax to the story, is a mainstay of the Hollywood Western. In the seminal Western novel The Virginian (1902) author Owen Wister had his hero do the walk-down to face the villain Trampas at the end of the book – though his description of the actual combat is oblique. Wister knew that a man’s gotta do what a man’s gotta do, and the Virginian must, despite the pleas and protests of his wife-to-be schoolteacher Molly, show courage and grit, and vanquish the lowdown rustler in mortal – and above all single – combat.

Even before Wister, the dime novels, which began being published contemporaneously with the frontier-era events they glorified, described in lurid terms these gunfights as if they were gladiatorial contests, referencing also the single combat of medieval knights and the European code duello, which was imported to New Orleans and other Southern climes. So the myth-making machinery was cranking out the quick-draw showdown legend long before Hollywood got into the act.

Was this all hokum? Did gunmen really face off in Main Street at key moments of the day such as dawn, noon or sundown and settle their differences by seeing who would be faster to draw and fire?

The short answer is no. Sorry.

The first revolvers were in any case far too heavy and cumbersome for a fast draw from a side holster. They were great horse pistols, usually carried in scabbards attached to the saddle. The Walker Colt, for example, introduced in 1847 and in service through the Mexican and Civil Wars, was 15.5 inches (390 mm) in length and weighed four and a half pounds (more than 2 kg). Try getting that out in a microsecond. This is the gun Mattie wields in the 1969 version of True Grit, and when she sees Tom Chaney it takes an age to extract it and cock it, and when she fires the recoil knocks her flat on her back.  The .44 Remington New Model Army, a popular handgun current between 1862 and 1875, was only slightly lighter and smaller, at 2 lb 13 oz (1.27 kg) and 13.25 inches (337 mm) in length.

It wasn’t until the mid-1870s that a smaller and lighter pistol became popular in the West, the famous Colt .45 Peacemaker. It was still no derringer, the seven-inch barrel model weighing in at just over 2 lbs (about 1 kg) and being 12.5 inches (318 mm) long.

Most people carried guns such as these in a pocket or stuck in the waistband of their pants. According to History Net, the first holsters evolved from military use, and were carried on the right side, with the pistol butt facing forward, so that a soldier on horseback could cross-draw his pistol with his left hand and leave his right hand free to wield his saber. Many Army veterans continued to wear their civilian guns this way, in holsters with and without flaps, on the Western frontier after the Civil War. “It is uncertain who first thought up the idea of what became the traditional ‘cowboy’ holster, commonly referred to as the Mexican Loop or El Paso Loop holster.” And the article adds, “These Mexican Loop holsters that were usually worn high on the hip into the 20th century were not fast-draw holsters, and the so-called Hollywood fast-draw holsters of the 1950s movie boom simply did not exist in the 1800s.”

In 1882 the ‘Bridgeport rig’ was patented by one Louis S Flatau, sheriff of Camp County, Texas. This enabled the user to rotate the pistol attached to the belt upwards so that a person could fire without actually removing the gun. It was scorned by the military but a few lawmen did use it, notably James B Gillett, Marshal of El Paso, Texas, and it is sometimes called the Gillett rig for that reason. But it was far from common.

The whole notion of speed, which has become the mainstay of the genre, and indeed has developed into a sport on its own, has dubious roots. In formal duels accuracy and calmness were far more to be prized than speed, and usually the antagonists approached each other with their firearms already drawn. According to Robert K DeArment, biographer of Bat Masterson, in the ‘Wild West’ the very expression “quick on the draw” had its more modern meaning, referring to a person who would go for his gun at the slightest provocation, rather than a person able to withdraw the weapon with speed.

Thomas J Dimsdale, in his 1953 account of The Vigilantes of Montana, did write of lawman/road agent Henry Plummer that he was “the quickest hand with the revolver of any man in the mountains. He could draw the pistol and discharge the five loads in three seconds.” If Dimsdale is being accurate that would seem to suggest that speed was at a premium. In a mêlée it probably was.

Another website, The Straight Dope, in its article Did Western gunfighters really face off one-on-one? tells us that “a fair fight offered too great a chance that the guy starting it might get killed.” On March 9, 1877 gamblers Jim Levy and Charlie Harrison fell out over a card game in Shingle and Locke’s Saloon in Cheyenne, Wyoming, and Levy challenged Harrison to take it outside. So they squared off in the street, in a very rare Hollywoodesque contretemps. Harrison grabbed his gun as quickly as he could but Levy was cooler and took careful aim, plugging his man. Unfortunately it all got a bit less Wild West after that because Levy approached his fallen opponent and methodically shot him again while he was down – this unsporting act was a contravention of the Hollywood gunslinger code of conduct, as you know. Harrison died 13 days later. In 1882 Levy got too cocky, trying the same ploy when he quarreled with another gambler, John Murphy, in Tucson, Arizona. Levy challenged him to a showdown the following day. That night, though, Murphy and a couple of friends spied Levy in a doorway and, deciding that there was no time like the present, shot him dead on the spot.

Bat Masterson, in his Famous Gunfighters of the Western Frontier, published in 1907 when he was a journalist in New York, said of Harrison that he was “the most expert man I ever saw with a pistol. He could shoot faster and straighter than any man I knew”. But this, Masterson said, was at target shooting, and the implication is that the speed was at shooting the pistol repeatedly rather than drawing it from the holster. Masterson himself always emphasized deliberation over speed.

Famous gunmen met their end in distinctly unglamorous circumstances that Hollywood would never have countenanced (though delighted in recounting afterwards), for speed had nothing to do with it. Wild Bill Hickok died in Nuttall and Mann’s No. 10 saloon in Deadwood, South Dakota on August 1, 1876, shot in the back of the head by Jack McCall. Bob Ford, who himself had shot Jesse James in the back, was gunned down in his own tent saloon in Creede, Colorado on June 8, 1892 by a shotgun-wielding Edward O’Kelley. And Texas gunman John Wesley Hardin was also shot in the head from behind, on August 19, 1895, by Constable John Selman in the Acme Saloon, El Paso. It all seems very far from the myth. The true West hero whom many regard as the archetypal gunfighter, Hickok, famously didn’t often use holsters at all, keeping his pistols in his belt or a sash about his waist.

According to Louis L’Amour, the Texas desperado Cullen Baker was the first to develop the art of drawing a gun with speed. In The First Fast Draw (1959) Baker (who is more of a goody than a baddy) develops the skill in self-defense, practicing until perfect at rapidly pulling a revolver and firing it before his opponent has realized what was happening. Believe that if you will.

There are so many Westerns movies in which the lightning-fast draw is eulogized. In Man Without a Star (1955) Dempsey Rae (Kirk Douglas) shows off to the young Jeff (William Campbell) by twirling his gun fancily, and the boy really wants to learn that. But Kirk tells him no, “Twirling a gun never saved a man’s life.” And he adds, “There’s only one thing you gotta learn. Get it out fast, and then put it away slow.” In The Tin Star (1957) expert gunman Henry Fonda teaches tyro sheriff Anthony Perkins how to draw fast and fire with accuracy. Getting that gun out fast and shooting first will save his life. Some Westerns, such as A Gunfight (1972) or The Quick and the Dead (the 1995 version) even have quick-draw gunfights as spectator sports.

Indeed, the very titles of Westerns stress the importance of being quick on the draw. Fast on the Draw (1950), The Fastest Gun Alive (1956), The Last of the Fast Guns (1958), The Quick Gun (1964), Four Fast Guns (1960), and many more all added to the myth. What counted was how fast you could get that gun out of its holster and start blazing away. 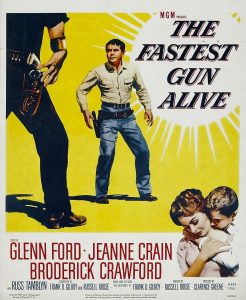 Some Western actors prided themselves on their quick-on-the-draw skills. In an article in True West magazine, Marshall Trimble tells us that the first fast-draw competition to determine who would take the crown happened at Knott’s Berry Farm in 1954. Hugh O’Brian, not yet that famous because Wyatt Earp hadn’t started on TV, claimed that his 0.25 of a second was the fastest. O’Brian challenged Audie Murphy to a contest, but when Murphy requested live ammunition, O’Brian sagely declined. Glenn Ford, Ernest Borgnine, Jock Mahoney and James Arness also challenged for the title of Fastest Gun in Hollywood.

Modern day quick-draw experts are certainly capable of remarkable speed. In 1980, Bob Munden was named “the fastest man with a gun who ever lived” by The Guinness Book of Records. He even married a fast-draw artist: Becky Munden was the women’s quick-draw champion. It is claimed that Bob could draw his weapon, shoot two different targets with precision, and re-holster his gun in a mere .02 seconds. It seems impossible. It can’t be possible!

I would like to have seen a showdown between Bob and Lucky Luke. Lucky, we all know, was so quick on the draw that he was “plus vite que son ombre” – he could even outdraw his own shadow.

But there was simply no tradition of this in the Old West. Competitive athletes such as Mr. Munden practice for hours a day, for years, just on that skill. In reality, though, when men resorted to gunplay in the nineteenth century West it was a question of coolness, accuracy and determination to down the opponent or opponents, and had little to do with how fast a gun could be extracted from its resting place. As Bob Munden himself said, ““There weren’t any fast-draw artists in the Old West. The guns weren’t designed for it, and the holsters were designed to keep the gun in place.”

It’s a pity. We don’t like our Western myths being debunked. Still, I guess that’s why they are myths. 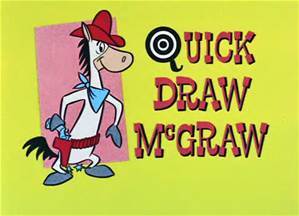 PrevPreviousGuns of the Timberland (WB, 1960)
NextBronco Buster (Universal, 1952)Next
Jeff Arnold © 2022 – All rights reserved – Designed by BetterCallChris
Scroll Up