Hats off to the Stetson

There are three main ways to distinguish a cowboy: his horse, his gun and his hat. However, one is more important than the other two. Even unhorsed, on foot in town maybe, the gun and hat are still there. And even if there’s a gun ordinance in town and he has no pistol on his hip, for example in the saloon, you’ll still never separate him from his hat. When it all comes down to it, it’s the hat that makes the cowboy.

He wears it out of doors, indoors and in some movies even in the bath.

All Western stars knew this. It was why, when they got a hat they liked and it just suited and fitted, they hung onto it through picture after picture.Charlton Heston, talking about Will Penny:

Hats are very important. I used that hat in about four Westerns. Then someone stole it on me. Wish I could find him. I’d kill him. You get a good hat, you gotta hang on to it.

And talking of Heston-Westerns, you will remember the bit in The Big Country where he takes one look at Eastern dude Gregory Peck’s hat and advises him not to wear it on the ranch. Hats here are a way of fitting in, almost a sign of manhood.

James Stewart was as fond of his hat as he was of his horse Pie. It was a pretty beat-up, sweat-stained affair, that hat, a sorry-looking item to be sure. But it suited him perfectly and was part of Stewart as Western star. When he abandoned it in Shenandoah, it ruined the film. Oh, alright then, Shenandoah wasn’t very good but I will grudgingly admit that there may just have been other reasons than headgear for that.

Randolph Scott (hats off) so loved his hat that he gave it a name, Chapeau. Tragically, it was crushed by a wagon wheel when he was doing his own stunts in a fight in Tall Man Riding in 1955. There are great tragedies in this world. Krakatoa, the death of Desdemona, the Shaanxi earthquake of 1556, the loss of Chapeau. We just have to grit our teeth and carry on. I once left a Stetson on a train. Come to that, I once left a Borsalino in a pew in Santa Maria Novella. I went back for it only a couple of hours later and it was already gone. To pinch a hat from a church! I expect Dante reserved an especially low circle in his Inferno for hat-stealers. I didn’t replace it, though. Borsalinos have really fallen off in quality. They used to be expensive but worth it for the style and top-notch felt they used. Now they are just expensive. I wear a Guerra for posh, these days. Fine hat.

But I seem to have strayed from the point. Back to Western hats.

Naturally there were many hatters in the West and many brands of hat but of them all, the Stetson seems to have claimed pride of place. To many people, Stetson and cowboy hat are synonymous. While panning for gold in Colorado in the 1860s, John B Stetson created a hard-wearing hat for himself made from thick beaver felt. Although he wore it first as a joke, Stetson soon grew fond of the hat for its ability to protect him from the elements. Its wide brim protected him from the weather and the high crown kept an insulating pocket of air on the head. He even used it to carry water. So do I: when walking my dog Wyatt on a hot day I carry a bottle of water and give him a drink out of my hat. He likes it and it cools my head when I put the hat back on. 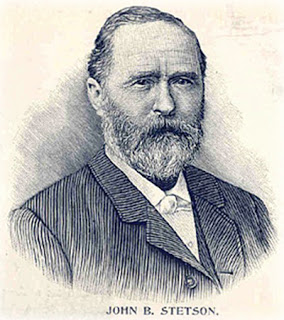 The legend tells that a cowboy saw Stetson and his unusual hat, rode up, tried the headgear on for himself, and paid Stetson for it with a five-dollar gold piece, riding off with the first Western Stetson on his head. Stetson went into the hatting business and the rest is history.

Stetson made hats for the Texas Rangers, the US Cavalry hat and even those famous ones for the Canadian Mounties.

In reality, of course, Westerners didn’t only wear Stetsons. You might think they did if you are keen follower of Hollywood movies (where they wear them in pictures set even before Stetson was born) but in fact you’d be just as likely to see Bat Masterson or an Earp in a derby or a top hat as a Stetson. Those wide-brimmed affairs weren’t really for town use. The writer and photographer Lucius Beebe called the bowler “the hat that won the West”. Of course everyone wore a hat in the nineteenth century; the only question was which.

And some screen cowboys became attached to different brands of hat. You can still buy a Tom Mix Stetson. Think of that great Western actor Glenn Ford: he wore a Jaxonbilt with curled brim that became recognizable as ‘his’ hat. See it in Jubal, say or any of many Westerns he starred in. Tex Ritter wore one too.

Reader Bob (who admits to having 30 hats) says that his favorite cowboy hats of all are:

Clearly the classic wide-brimmed cowboy hat was influenced by the Mexican sombrero. A high crown gave insulation and a broad brim gave shade. If you look at a picture like The Avenger, with Buck Jones, you can see the cross-over Mexican/cowboy effect. 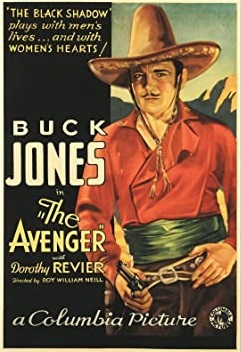 Hats followed fashion and developed, though. Think of those huge ten-gallon affairs worn by the cowboys of the silver screen in the 1920s, right through into the 40s. Some of them were plain silly, but the actors felt obliged to wear them. Look at Tim McCoy, for example.

Later on Stetsons became rather more restrained. It was noticeable that in the 1960s brims got narrower and more curled. Like Horst Buchholz as Chico in The Magnificent Seven.

The crease became important. They gave hats individual character, and creases and dents make it easier to put on or remove the hat by grabbing it by the crown rather than the brim. A very popular crease used on cowboy hats is the Cattlemen, creased straight down the center of the crown with a dent on each side. Then there’s the Carlsbad crease, now often called a “Gus crease” after the character Gus McCrae in Lonesome Dove. That keeps a high crown at the back, with the crease sloping steeply toward the front. Or you might favor the rodeo crease, the bullrider’s crease, the quarter horse crease, or the Tycoon, with a pinched front.

Then we even got cowgirl hats, pink, maybe, and with sequins and fringes. Yes, well.

Inside the cowboy hat you always see a little ribbon bow. It’s in memory of past hatters, who developed brain damage from treating felt with mercury, which gave rise to the expression mad as a hatter. The bow on the inside hatband at the rear of the hat is supposed to resemble a skull and crossbones.

Of course there is the old cliché about the goodies wearing white hats and the baddies wearing black ones. It’s still trotted out today and you can still identify a villain by calling him a ’black hat’. It was always nonsense. Hopalong Cassidy dressed in black and he was no baddy. Perish the thought. Tom Mix appeared in black hats quite often. Black hats improved contrast in black & white movies.

The color was down to personal preference, not goodiness or badiness. Silverbelly (or gray) hats tend to look better on people with ruddy complexions, like John Wayne. “Black hats make me look beet red or deathly pale,” said Duke. “My silverbelly makes me look normal.” Duke often wore a Resistol.

In High Lonesome there’s a good bit where Chill Wills chooses a suitable hat for Cooncat, the newly-arrived and hatless youth who has turned up on the ranch. It takes some time before arriving at the right item. Chill knew just how important the choice was.

Sometimes hats ‘brand’ a character as a type. For example, if a fellow is wearing a coonskin cap, he will be a Hawkeye/Davy Crockett/Daniel Boone style of frontiersman, or a pioneer mountain man or trapper. Will Geer seems to be wearing half a wolf on his head in Jeremiah Johnson. Arthur Hunicutt specialized in that headgear. He even wore one in the Everglades in Distant Drums. Must have been sweltering.

Characters in post-Civil War Westerns might wear their old army hat, and the color will signify their allegiance in the Unpleasantness Between the States.

I suppose we could get into the whole subject of Indian headgear, war bonnets and such. But they aren’t cowboy hats. We’ll deal with those another day.

Sometimes hats play a key part in the film. Think of the much mocked low-crowned topper of James Caan in El Dorado.

In Wild Bill there is a running gag of touching the hat. You don’t touch a man’s hat. That’s what causes most of the gunplay, when they touch Wild Bill’s hat. As Lyle Lovett sang, “You can have my girl but don’t touch my hat.”

Of course if you listen to the song Stag O’ Lee (try the Bob Dylan version) you will understand that taking another man’s Stetson is a shootin’ matter. 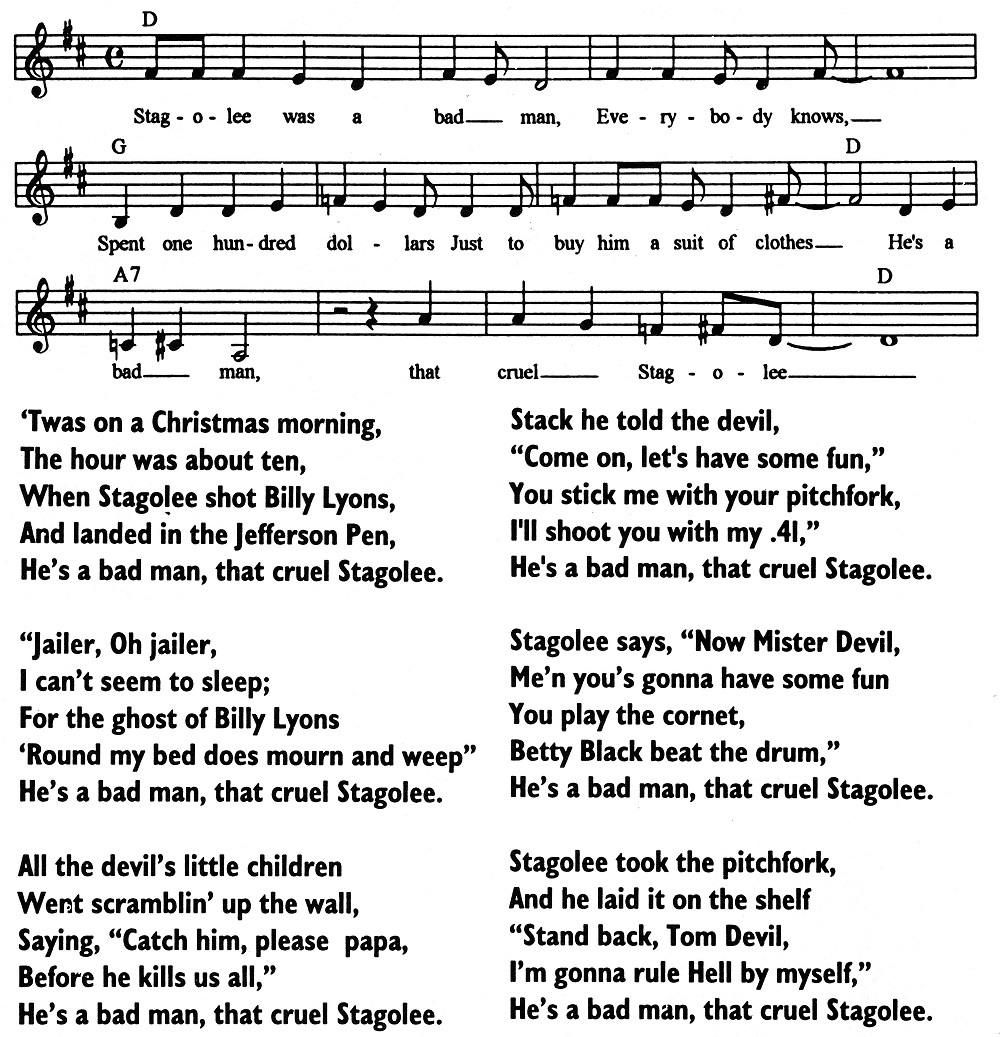 One of the great tragedies of that lovely movie Silverado was the decision by director Kasdan to cut out the scene where Kevin Kline, having just shot a man who had stolen his hat (fair enough), kicks up the headgear from the floor in a saloon with the toe of his boot and it lands on his head. Is that cool or what? Luckily you can see it in an out-take on the DVD.

Like reader Bob, I have more hats than I need. One of the proudest moments of my life was when I was walking (no horse or gun) through Durango, Colorado and a gentleman passing by said, “Sir, that hat looks really great on you.” I don’t think he was being ironic. 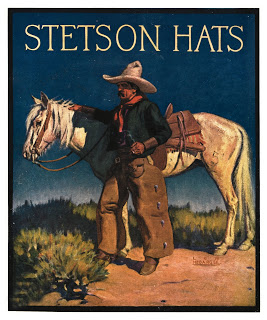