Last time, as part of our 1953 season, we reviewed a Budd Boetticher-directed Western, Seminole (click the link for that one). Mr Boetticher in fact helmed three oaters that year. The other two were Universal pictures, released almost concurrently, The Man from the Alamo, starring Glenn Ford, which came out on August 21, and Wings of the Hawk, with Van Heflin, which was released on August 26. So let’s look at those next. Today, the Alamo. 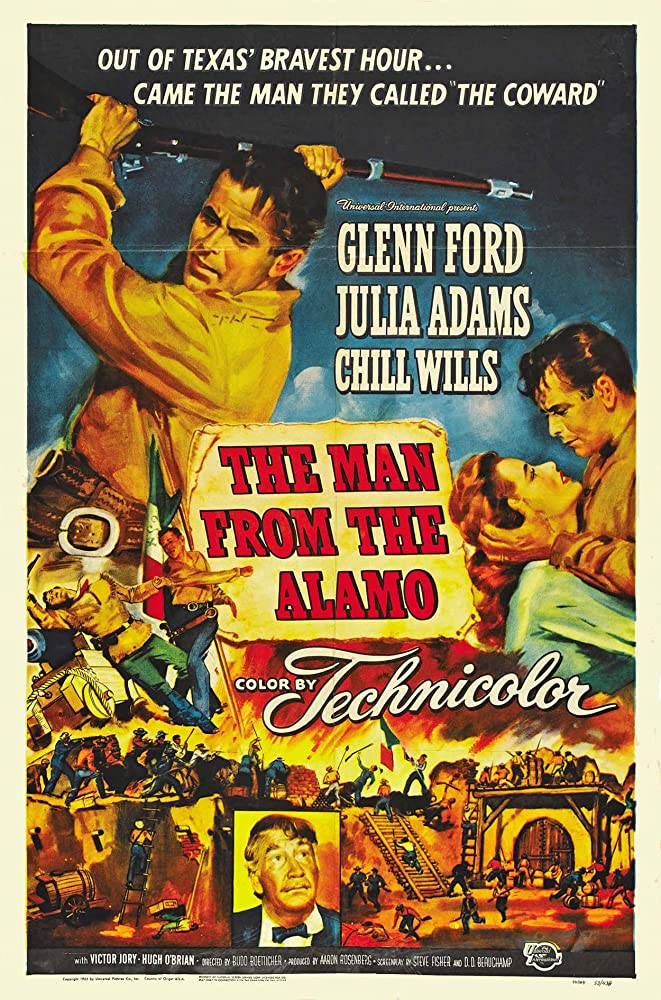 Though actually, this film is not really another retelling of the heroic defense of the Alamo like so many other movies, but the story of a man (Ford) who was tasked with a mission to leave the church-fortress to aid the defenders’ families and who suffered accusations of cowardice as a result.

Westerns loved the title The Man from… One thinks of the man from Laramie, of course, but there were also men from Bitter Ridge, Dakota, Del Rio, Galveston, Guntown, Hell’s River, Salinas, Snowy River, Texas, Utah, loads more, even from Nowhere.

Maybe after a couple of rather less than stunning 1951 Westerns, Glenn Ford wanted to recapture the magic of The Man from Colorado of 1948. Actually, for such an ardent Westernista, Glenn slightly eschewed the genre at this time: this was his only outing the saddle between The Secret of Convict Lake (released March 1951) and The Violent Men (January 1955).

This one is too early to be a ‘proper’ Western by some purists’ standards but actually, although it’s supposedly set in the 1830s, it’s a real Western alright. Sam Houston sends messenger Lt Tom Lamar (Hugh O’Brian) to tell the defenders that he will not be sending reinforcements; they must hold out as long as they can. Johnny Stroud (Ford) is chosen by lot to ride out of the Alamo before the inevitable massacre to protect the families of the besieged men. He is too late and so embarks on a voyage of vengeance to kill the leader of the guerrilla band, Jess Wade (good outlaw name), played by perennial villain Victor Jory, who burned his farm and killed his family. These marauders dress up as Mexicans and what could be sneakier than that?

Branded a deserter and coward, Johnny is aided by a young Mexican boy (Marc Cavell), who knows Stroud is no coward (as if, it’s Glenn) and by Beth Anders (beautiful Julia/Julie Adams, who would return in Wings of the Hawk: this was the sixth of eight straight Westerns she starred in 1952/53), who comes round to that view. Chill Wills, splendid as a one-armed town elder John Gage, also comes to see Stroud as heroic but only at the very end. Of course Chill would return to the Alamo in 1960.

But Johnny finds himself in a cell awaiting hanging with, as luck would have it, a member of the gang of bandits (Neville Brand). If they can escape together and Glenn can infiltrate the gang…

Ford was an outstanding Western hero. He was handsome, rode well (always on high grade horseflesh), wore that Jaxonbilt so well and did an excellent line in the strong, silent, often misunderstood type. Above all he underplayed it, in an almost Gary Cooperish way. The role he had in this movie suited him to a T. Actually, according to a September 1952 Hollywood Reporter article, he broke three ribs during filming when he was thrown against a tree by a horse. Production was suspended for approximately five weeks. Oops. 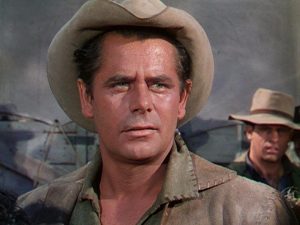 Boetticher left to others the grand themes of Western history. He wasn’t interested in the Alamo so much as the story of one man. Think of those excellent mid-to-late 50s movies he made with Randolph Scott: they aren’t about great themes, conquering the West or crossing the continent; they are about how one man deals with adversity courageously.

Produced by Aaron Rosenberg for Universal (we think of those Anthony Mann Westerns…), directed by Boetticher, written by Steve Fisher and DD Beauchamp the Great from a Niven Busch story, photographed by talented Russell Metty and with music by Frank Skinner, this early 50s Western really had all the right ingredients. There’s action a-plenty. The Alamo scenes are quite impressive and Travis and Bowie look suitably beat up and dirty (nothing like Harvey or Widmark seven years later in the plodding Wayne Alamo).

The ending is as expected maybe but none the less heartening for that. There’s a good action finale with mucho rootin’, tootin’ and, of course, shootin’. Variety said, “High spot of the footage is the climactic battle between good and evil, with Ford protecting a wagon train against Jory’s gang of renegades. It’s a sequence that Budd Boetticher’s direction fills with violent, but believeable [sic], action.”

Some of the dialogue is a bit pedestrian, it’s true, and you always wonder in these cases why the hero doesn’t simply explain the situation and get the people on his side. As the New York Times said, “we still would like to know why The Man From the Alamo elected to keep his mouth shut.” But no, he has to go his lonesome way with jaw set and upper lip stiff, gritty in the knowledge that he is right and must stand above the base taunts and rumors, even if they get him lynched. No true Western hero will stoop to justifying himself.

The film was criticized for giving a distinctly one-sided account of the siege of the Alamo, and for casting a white boy as Carlos, but hey, it was 1950s Hollywood.

Howard Thompson in The New York Times called it a “respectable, old-fashioned outdoor melodrama … another medium-budget ‘historical’ Western of strictly medium, unhistorical significance.” That was a bit harsh. Variety liked it better: “This basic outdoor feature has a rousing climax, good performances and beautifully photographed outdoor values. Glenn Ford and Victor Jory are particularly good in the rugged scenes and the former’s performance helps to carry things during some midway story slowness.”

Later critics have been generally positive if a tad superior. Dennis Schwartz: “Budd Boetticher directs a superior no-nonsense action-packed traditional ‘B’ Western.” It wasn’t a B-Western. The Man from the Alamo was perhaps not in the same league as great ’53 Westerns like Paramount’s Shane, Warners’ Hondo or Metro’s The Naked Spur, but it is a good little oater, well worth a DVD purchase. With that cast and crew, you can’t go too far wrong.

Next time, it’s down to ole Mexico.

PrevPreviousSeminole (UA, 1953)
NextWings of the Hawk (Universal, 1953)Next
Jeff Arnold © 2022 – All rights reserved – Designed by BetterCallChris
Scroll Up