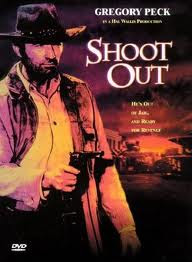 . A rare thing – a mediocre Gregory Peck . . After the considerable and deserved success of True Grit (Paramount, 1969), Universal must have wanted to replicate that box-office potential Paramount had found. They got Henry Hathaway, True Grit‘s director,  to helm Shoot Out. An older gunman played by a famous Western star finds himself teamed […]