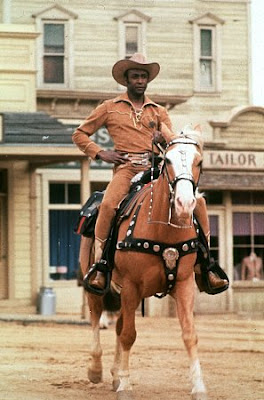 I have said that True Grit‘s French title of 100 Dollars pour le Shérif is the worst ever translation of a Western film name. Actually, I can think of an even worse one: in French movie theaters Blazing Saddles was called Le Shérif est en Prison. I mean, honestly. The IMDb page on the movie, when accessed in France, is hilarious because it automatically translates all film titles into the French ones and therefore recounts how Brooks was taking a shower one morning and the words le shérif est en prison suddenly popped into his head. Doh. Actually, various titles had been considered, such as Tex X (a cowboy reference to Malcolm X) and Black Bart (a TV pilot of this title was made and was quite amusing although it had none of Mel Brooks’s zaniness in it). Blazing Arrows was an alternative title for the Gary Cooper Western Fighting Caravans and maybe subconsciously that was in Mel’s head while in that shower. Anyway, however he thought it up, it’s a great title. And for me, it’s a great film.

I have also said that I find comedy Westerns as a genre faintly sacrilegious but I don’t know why I say this really because I love so many of them. Especial favorites are Buster Keaton in Go West and Laurel and Hardy Way Out West. A good comedy Western is an affectionate, not mocking, parody. 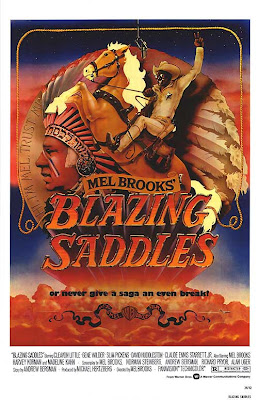 In fact, Blazing Saddles is not just a good comedy Western. It is also one of the funniest comedies ever.
.
.
Everyone who knows this movie has her or his favorite gag. For very many people the beans scene is it. This episode is surrealistically funny, by the way, in the censored TV version where the farting sounds were deemed offensive so the cowboys move in a silent choreographed ballet. You may prefer “Mongo just pawn in game of life”, the punched horse, Mel as the Sioux chief speaking Yiddish, the homage to Ra,dolph Scott, “Boy, is he strict”, the Howard Johnson ice cream parlor (1 flavor), “Mongo, Santa Maria!” and so on – there are so many. The BAFTA-winning team of writers, including Brooks and Richard Pryor (whom Mel wanted to play Bart but who was considered too ‘alternative’ or racy at the time), must have had a whale of a time.
.
.
The film could never be made today. The language would never get past the censors. Warners even passed the scene where Lili von Shtupp in the dark comments on Cleavon Little’s, ahem, physical attributes. But they drew the line at the subsequent joke, which had to be cut, about his arm (watch the making-of on the DVD to get that gag). Middle-class white people these days would never permit so many uses of the n-word (except maybe in a Tarantino movie). Warners were amazingly tolerant – or Brooks amazingly persuasive. Many actors said they had difficulty in saying the lines. John Wayne, offered a part, said he thought the script magnificently funny but could never be in it himself. Actually, though, Brooks was right when he said it was a proper use of the n- word: only ‘good’ (but stupid) people in the film use it. The movie does in fact have a serious message behind the hilarity. It’s a profoundly anti-racist film. “Blazing Saddles was a film that broke ground,” said Mel Brooks. “It also broke wind.”

It’s 1874 in 1974. Very many of the jokes, from the Gucci saddlebags to Basie in the desert playing ‘April in Paris’, depend on this trick, as does the wild ending, of course.

Another reason to love the movie is the fact that it is jam-packed with every Western cliché under the sun, from the drunken ex-gunfighter to “head them off at the pass” yelled by Slim Pickens.

Of the actors, Mel Brooks himself, in about twenty parts, overacts joyously. Academy award-nominated Madeline Kahn is glorious as the Dietrich figure (with more than a hint of Mae West). 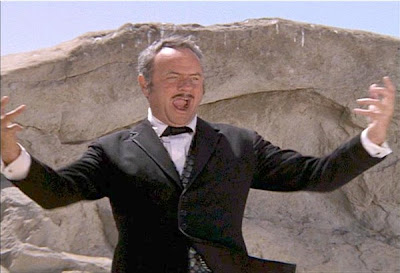 Harvey Korman is probably the outstanding actor as Hedy Lamarr (HEDLEY!) He is the slimiest ever politician-crook-railroad baron. He should certainly have won best supporting actor, which, in fact, he pitches for in the script. Sense-of-humor-challenged Hedy Lamarr, who obviously didn’t get the joke, sued Warners for using her name. They settled out of court and Mel apologized personally. She should have been flattered. Slim Pickens’s huge talent for comedy was exploited brilliantly. The acting is superb throughout. Even Ben Johnson appears. ‘Claude Ennis Starrett Jr’ (Jack Starrett) does a funny Gabby Hayes impersonisation.

The opening corny ballad (Oscar-nominated, words by Mel) is sung by Frankie Lane. He did it straight, not understanding that it was a parody, and it is the funnier for that.

The movie poster is a hugely amusing work of art in itself (Never give a saga an even break).

But I think I’ll go for the Gene Wilder line when he tells of his gunfighter past: “I must have killed more people than Cecil B De Mille.”

Not everyone loves Blazing Saddles. Humor is a very personal thing and either this picture touches your funny-bone or it doesn’t. Myself, I think it’s great.