I don’t want to get into top tens and all that. A league table of great Western actors. What’s the point? But it is undeniable that if you did draw up such a list, James Stewart would appear on it, and pretty high up too.
Before the Second World War no one would have thought so. Jimmy Stewart was a hugely popular movie star but he was Mr Smith, bumbling away in Washington. The furthest West he got was Shinbone, when he was a comic deputy cleaning up Marlene Dietrich’s town with no guns in Destry Rides Again. Hardly the stuff great saddle-and-sagebrush stars are made of, is it. He wasn’t exactly John Wayne.
.
. And then, after a “good” war, he was George Bailey in Frank Capra’s It’s a Wonderful Life. Everyone knew by now that James Stewart was amusing, naïf, slightly gauche, folksy and with loads of charm.
But James Stewart had other ideas. He longed for tougher roles and planned systematically to get them.
And under Delmer Daves’s steely direction in 1950 and under Anthony Mann’s from 1950 to 1955, he did it. He burst onto the prairie with all the Western grit and gutsy determination you could want. He carried Colts and Winchesters and shot to kill. He was driven, at times almost manic. He was superb.
.
. .
And if nothing later quite matched those early 50s Westerns, they were enough to elevate Stewart into the ranks of the very best Western leads.

I mentioned Wayne above. Stewart himself said, “I suppose people can relate to being me, while they dream about being John Wayne.”

We can divide the Western career of James Stewart into five phases:
1        Pre-War
First, in the pre-War period 1936 – 39, came Rose-Marie (1936) and Of Human Hearts (1938) and his first real Western, the highly enjoyable 1939 Destry Rides Again. We can actually discount the first two. Rose-Marie was a Jeanette MacDonald/Nelson Eddy operetta set in Montreal about a Mountie getting his woman, so hardly a Western, and Of Human Hearts was a slushy family drama in which Stewart is a doctor in the Civil War who meets Abraham Lincoln. That wasn’t a Western either. So before the 50s it really comes down to Destry.
2        Post-War
Then in Phase 2 (1950 – 57) we have the post-War films (we’ve reviewed them all individually so consult the index if you want to know more): the excellent Broken Arrow (Fox, 1950), directed by Delmer Daves, actually shot before Winchester ’73, though it came out after, and then the series of Westerns Stewart did with Anthony Mann: Winchester ’73, Bend of the River, The Naked Spur, The Far Country and The Man from Laramie. This phase ends with Night Passage, the movie he was to have made with Mann but did not and which turned out, perhaps consequently, to be not as good.
.
.
In Broken Arrow he played Tom Jeffords, bravely negotiating peace with Apache leader Cochise, despite the opposition of hardliners and firebrands on both the white and Apache sides. It was a splendid performance in a ground-breaking film.
.
.
In Winchester ’73 Jimmy was more driven, determined at all costs to get back the famed rifle he won in a marksmanship contest in Dodge, which had been stolen by Dutch Henry Brown.
.
.
The Naked Spur gave us a Jimmy Stewart so driven he was on the edge of madness, battling a wonderfully good Robert Ryan in equally pitiless mounbtainous terrain. It was a stunning performance.
.
.
Bend of the River saw him up north, a ‘man with a past’ helping sturdy homesteaders against ruthless profiteers.
.
.
In The Far Country he was up north again – in fact he even crossed into Canada – equally driven and facing another brilliantly played foe, this time John McIntire, wonderful as charming-rogue Judge Gannon.
.
.
Some people regard The Man from Laramie as the finest of all the Mann/Stewart pictures (and they may not be wrong) and yet again an utterly determined Stewart seeks out the killers of his brother and finds who has been selling guns to the Indians.
.
.
These were all magnificent pictures, indeed, some of the best Westerns ever made.
Night Passage, though, was less good. He insisted on doing a lot of hokey stuff, playing the accordion and so on, and the picture lacked the ‘hard edge’ of the Mann ones. It seems that Stewart and Mann fell out.
.
. 3        Early 60s
Then, after an understandable no-Western hiatus in his career, we can imagine a Phase 3, 1961 – 64, with the work Stewart did with John Ford: Two Rode Together, The Man Who Shot Liberty Valance and Cheyenne Autumn. This was late and, sadly, noticeably weaker Ford – though Liberty Valance was strong and Stewart was superb. Two Rode was a critical and commercial flop, Ford himself saying that he had only made it for the money and it was “the worst piece of crap I’ve done in twenty years”, and Cheyenne Autumn, voted by Harvard Lampoon “the worst film of the year” (though it wasn’t) and in which Stewart played a cameo Wyatt Earp in an extraneous and silly interlude that should have ended on the cutting room floor. Sandwiched in here was the big box-office hit (but terribly clunky movie) How the West Was Won (Ford directed part of that too but not Stewart’s segment) in which Jimmy was laughably miscast as a mountain man romancing someone young enough to be his granddaughter.
.
. 4        The late 60s
Then, in what I am calling Phase 4 of Stewart’s Western career, in the late 1960s he did four Westerns of low-to-middling quality: Shenandoah, a grandiose but rather plodding Civil War family saga in which he played the patriarch; the quite dreadful The Rare Breed, the worst Western he ever made; Firecreek, one of the only two Westerns he made with his pal Henry Fonda, a ‘small’ Western but not at all bad, because of the casting, mostly; and Bandolero!, another weak one, though he was the best actor in it. Several of these feebler Westerns were directed by AV McLaglen, who was not a top feature-Western director and probably should have stuck to TV, of which he did a lot. Stewart’s Western career ended in the 1970s with the other picture he co-starred with Fonda in, The Cheyenne Social Club, which was rather charming in a way, and his wonderful Western adieu, in which however he did not lead (indeed, his part was quite small), The Shootist. You might want to count in this final phase the voicing of Wylie Burp he did in An American Tail: Fievel Goes West in 1991 but I don’t really. 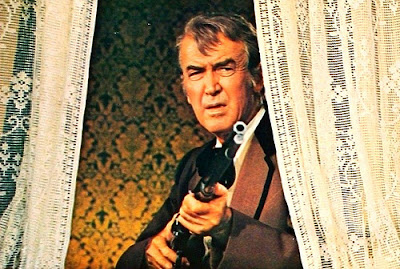 Discounting those first two late 30s non-Westerns and the 1990s cartoon, we thus have 18 pictures to consider.

Stewart said, “If a Western is a good Western, it gives you a sense of that world and some of the qualities those men had – their comradeship, loyalty, and physical courage. The vogue for the new kind of western seems pretty unimportant to me. They try to destroy something that has been vital to people for so long.”