.
.
Louis L’Amour on the small screen

At the end of the 1970s, the great Glenn Ford was back in the saddle for another TV epic, this time The Sacketts, a mini-series (the format was quite new) which compresses two Louis L’Amour novels, The Daybreakers and Sackett, into two 2-hour episodes.

It wheeled out many of the old faithfuls to play alongside Sam Elliott, Tom Selleck and Jeff Osterhage as the Sackett brothers. Ford is Tom Sunday, good-bad man, though he bears his age less well, seems to be going through the motions and sadly looks as though he had eaten a donut or two de trop. Ben Johnson plays Cap Rountree and is, of course, splendid. We also get Jack Elam, Slim Pickens and James Gammon, excellent as the elderly but still ornery Bigelow brothers, out for revenge after Elliott has shot their card-sharp brother.
Mercedes McCambridge has a brief early part as Ma Sackett. Even after all these years you still can’t help thinking of Johnny Guitar. LQ Jones is a cattleman in eyeglasses. John Vernon is satisfactorily slimy as leading bad guy Jonathan Pritts. Ruth Roman is back as Rosie, Johnson’s long-time ‘girlfriend’ and Gilbert Roland does his hidalgo act. So there are many old and loved Western faces, alright.
.
. 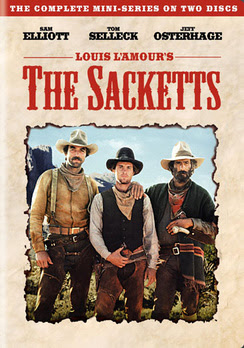 There’s also (there had to be) a girl each for the brothers: Marcy Hanson for Orrin, Drusilla Alvarado for Tyrel and Wendy Rastattar for Tell.
Apparently it was shot (by Jack A Whitman Jr) in California and around Buckskin Joe in Colorado but some of it sure looks like New Mexico to me – that limpid light again. The music is by Jerrold Immel and is well up to the task.
.
.
It was directed by Robert Totten, best know for helming Gunsmoke epsiodes.
.
.
It’s fun to watch and a lot happens. The actors clearly enjoyed it (Elliott, Selleck and Osterhage joined forces again to strut their stuff in another TV epic, The Shadow Riders, three years later). Ben Johnson joins the line-up at the end as the four of them walk down the street, Wild Bunch-style. There’s a good final shoot-out. The overall impression we are left with, however, is of a frantic editing and cutting to squeeze two novels’ worth of story into a couple of evenings’ TV watching. So yes, enjoy it – but don’t expect greatness.