Whispering Smith, a 1906 novel  by Frank H Spearman, was a much filmed story. Spearman, a bank president, was fascinated by railroads and wrote many books, fiction and non-fiction, about them.

Whispering Smith was about a railroad detective, modeled on Union Pacific detectives Timothy Keliher and Joe Lefors, though the character’s name was lifted from another, James L ‘Whispering’ Smith. 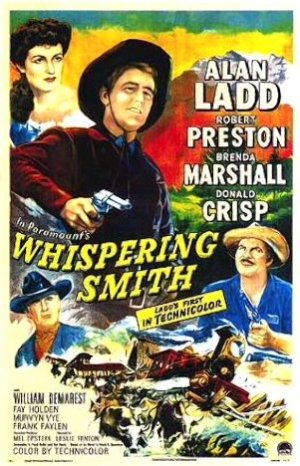 Ladd was a decent athlete. He was also by nature quiet and restrained, and in that sense he suited the role. The French title was Smith le Taciturne. He is very good in the relationship scenes and doubtless many of the female audience at his pictures swooned in their theater seats.
But he couldn’t cut it as a Western action hero. He was too smooth, too blond, too short – in short, too much the matinée idol.
In this version, a “true story” (that’s what they say), he plays a railroad detective who, having dispatched two train-robber brothers, suspects his best friend (Robert Preston, full of vim as ever, the archetypal charming rogue – he specialized in such roles) of harboring the third. Sure enough, Preston turns out to be leader of a gang of train wreckers who pillage the wrecks for loot. Ladd has, earlier, fallen for a soft-focus redhead (Brenda Marshall) who has since become Preston’s wife so the stage is set for conflict, alright, however much Whispering tries to avoid it.
.
. 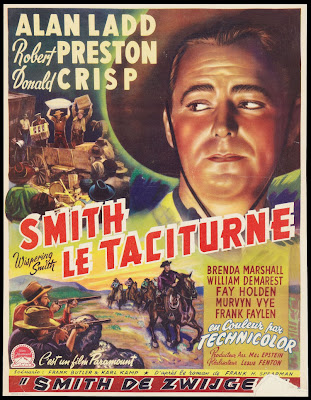 The movie’s a straight yarn, reasonably exciting in parts, but there’s too much talking, especially between Ladd and the soft-focus redhead. It was directed by Leslie Fenton, not really a Western specialist although he did later do the fun Streets of Laredo (Paramount, 1949) with the excellent William Holden and The Redhead and the Cowboy (Paramount, 1951), a lesser film but with the equally excellent Glenn Ford.
Some of the support acting is pretty ho-hum. Donald Crisp, for example, never convinced me in Westerns. Still, good old Ray Teal does have a bit part, so there’s that to look forward to.
.
. 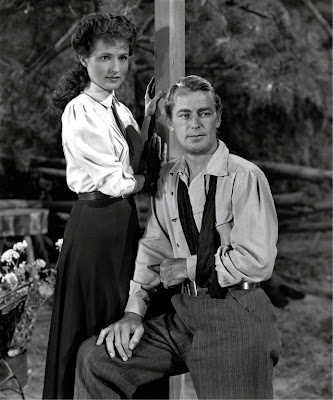 The best thing about it is the Technicolor location footage shot by Ray Rennahan in California. Long lenses bring the Sierras closer and the opening shots, rather spoilt by the titles over them, are magnificent. The non-location scenes were done on the Paramount set later used for the Bonanza TV series.
But when Ladd, forsaking for a moment the soft-focus redhead, says, “I’ll give you forty-eight hours to run Barton out of Williams Canyon; if you don’t, I’m coming in after him,” you feel like saying, “Oh yeah, you and whose army?” Poor Alan, he hadn’t got it in him. You feel he would have been more comfortable if the script had said, “Would you mind awfully asking Barton to vacate the canyon? Thank you very much indeed. I’d be so grateful.”
.
. 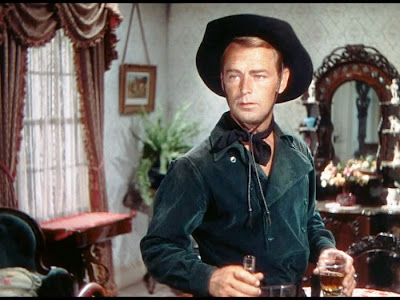 Anyway, do have a look at Whispering Smith if you haven’t seen it. It’s definitely worth a watch, if maybe not a DVD purchase. And it is certainly an essential part of the Alan Ladd canon.