.
Predictable but don’t underestimate it
.
.

.
.
Gunfighters is a good, solid 1940s oater with several merits even if in the last resort it’s predictable and clichéd.
.
. 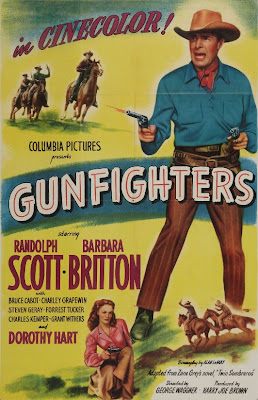 Cinecolor, rather nice
.
Randolph Scott was by this time turning out two Westerns a year and this was his 26th.

The production values are high. It was done in Cinecolor, a process which gives a pleasant almost pastel wash to the print and highlights the reds, and the nice Fred Jackman Jr photography of Sedona AZ locations, with all that red earth and those orangey-pink rocks, suits it very well.
The acting is good too. Scott does his seasoned Westerner act as Brazos Kane in the lead and there are two pretty girls, sisters, for him to choose between, Bess and Jane Banner (Barbara Britton and Dorothy Hart). The heavies are also strong, especially the sneering killer Ben Orcutt (Forrest Tucker) who fancies himself quicker on the draw than Kane. Poor fool.
.
. 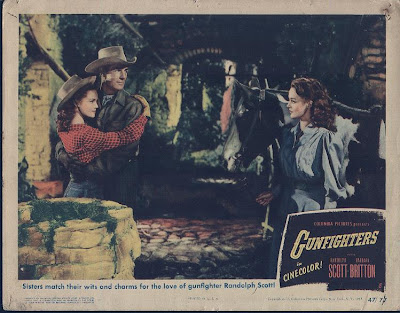 Sure you got the right sister, Randy?
.
It’s a rather corny start, with Kane killing his best friend in a Main Street quick-draw shoot-out because the friend “just had to see who was the fastest”. Kane hangs up his guns, never to fire them again. As if.
As is 100% predictable, he is obliged later in the movie to strap six-guns on again and shoot it out with the bad guys. He throws the pistols away again at the end when he rides off into the sunset with the chosen sis (sorry to spoil it for you but I don’t think I’m giving away much) but you just know it’s only until the next crisis, when he’ll be shooting people again.
The message is therefore rather rancid: however hard you try, the only way for a real man is to use firearms.
.
. 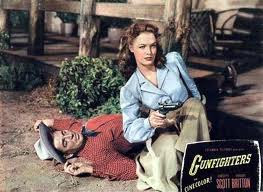 That’s his kind of gal
.
It was a Zane Grey story (Two Sombreros) which I haven’t read so I don’t know how much Alan Le May altered it for the screen but the writing is (surprisingly for Le May) the weakest part of the film. If you don’t guess within ten minutes who the murderers are, you must be pretty green.
There’s also the routine and despicable resort to lynching that disfigured so many Westerns. Not that lynching didn’t happen, it did, far too often, but just that it’s brushed off as insignificant. When Kane is saved from the hanging, the sheriff laughs it off as all cleared up now and no one arrests the attempted murderer. Harmless horseplay, I suppose.
.
. 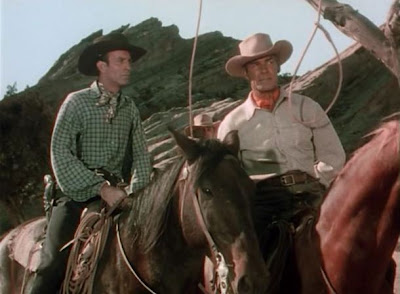 .
The picture was directed by George Waggner (1894 – 1984) who started as an actor in silents (he was Buffalo Bill in The Iron Horse) and also wrote a good many oaters in the 1930s. In the 40s he produced some too. So he was pretty experienced in the genre one way and another. He later directed a lot of TV Westerns. Occasionally the direction of Gunfighters is good, even inspired. I love the way, for example, that the plot starts right away, under the titles so that five minutes in, the story is well under way. And the horse chase sequence is terrific, with stuntmen but no fakery. At other times, though, the pace flags and you think they’ll never get to the inevitable final reel showdown.It was the first production work of Randolph Scott and Harry Joe Brown that was to blossom into such a productive and high-quality cooperation in the coming decade.
.
. 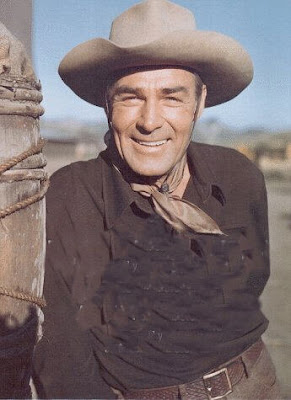 Writer Burt Kennedy said that it was the only Scott/Brown film not to make money, which wouldn’t have pleased Harry Cohn, but fortunately the next one, Coroner Creek, was a humdinger.

I love a Randolph Scott Western every now and then. They were so ‘straight’ and uncomplicated yet actionful and well done. This wasn’t one of his best maybe but don’t underestimate it. You could do a lot worse.