.
.
A cracking good Western
.
.
Randolph Scott followed up his appearance in Fox’s major big-budget color Jesse James in 1939 with the same studio’s 1941 Western when he starred (or technically speaking got second billing to Robert Young) in the Fritz Lang-directed Western Union. It is a first class Western..
.
. 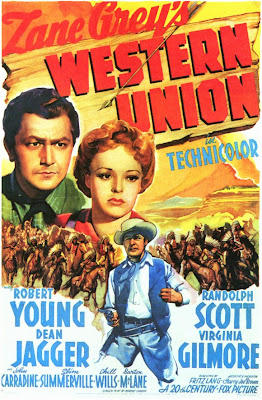 Randolph Scott puts the others in the shade

Scott had been leading in Westerns since 1932 and had come to notice especially for his Hawkeye in the 1936 Last of the Mohicans. After Jesse James he had a high-profile part in Universal’s When the Daltons Rode in 1940. Scott is the hero of Western Union and dominated the picture. 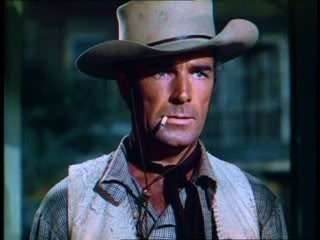 Good badman
.
His performance is outstanding. Good-badman roles enable a (talented) actor to be an action man yet appear troubled, and Scott handled this in a masterly way. Whereas many actors seek to get more lines and more camera-time, Scott, in common with Gary Cooper, liked to pare down his speaking part to the minimum. Taciturn, laconic, these are good words for a cowboy hero. Say it with your eyes.
As for the great Fritz Lang, he did three Westerns (in Hollywood anyway): his first was Fox’s Jesse James sequel The Return of Frank James, which was in some ways a superior picture to its predecessor, in 1940 and then Western Union. A decade later he directed Rancho Notorious (RKO, 1952), a rather turgid movie, it must be said. So we could hardly call Lang a Western specialist. But he sure got Western Union right. 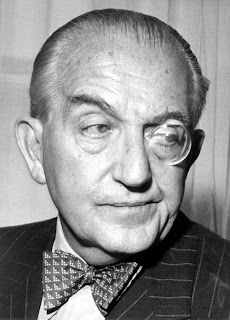 Monocled Fritz
.
The pacing is perfect and the action scenes are exciting. There’s a leavening of levity. First class direction.
.
. 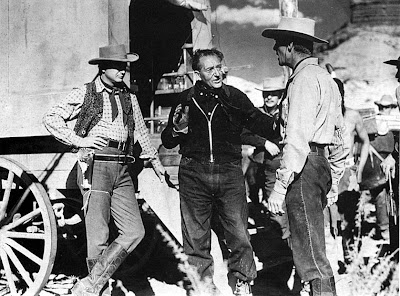 Young, Lang and Scott on the set
.
Big Manifest Destiny or Westward expansion themes had of course been a Hollywood staple, from the very earliest days of the genre. Span the continent and build the nation, that was the idea.
.
.
The Telegraph Trail was a fun Warners Western in 1933 which had a young John Wayne crossing the continent with wires but that was essentially a programmer. Western Union was the first to treat the theme seriously in a big-budget way. Lang and his writer Robert Carson entirely eschewed the commercial profit motive for the setting up of a trans-Continental telegraph in favor of the epic nation-building task promoted by Abraham Lincoln.
The (lovely) title screen announces ‘Zane Grey’s Western Union’. There is in fact some controversy as to whether the screenplay followed or preceded the Zane Grey novel. Grey died shortly before the film was completed and some believe that an anonymous hack ghost-wrote the book based on Robert Carson’s screenplay. Others say it was pure Zane Grey.
This was Carson’s first Western. He would go on to do another Randolph Scott one in 1943, The Desperadoes, and in ’46 the lightweight Glenn Ford comedy Western Advance to the Rear. But as was the case with Fritz Lang, he certainly gotWestern Union right.
.
. 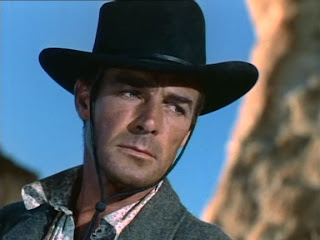 Troubled
.
The story has Edward Creighton (Dean Jagger, excellent as always) who is a pioneer who dreams of spanning the continent with the telegraph to bring civilization, peace and prosperity (though it is not explained how this will occur). He has a glamorous sister, Sue (Virginia Gilmore). In the first reel, good-badman Vance Shaw (Scott) saves Creighton’s life while Creighton is on a surveying trip in the wilds and Creighton repays him by overlooking his dubious past and hiring him on as a scout to Western Union. Naturally, Shaw falls for Sue. Then a cheerful Eastern dude, Richard Blake, appears in the shape of Robert Young and of course he also fancies Sue. The love-triangle plot strikes again.
They set to work and have to battle Indians, and badmen, and badmen dressed as Indians. The American Indians, frankly, are patronizingly and slightingly portrayed, as I suppose was acceptable in the 1940s but if I were a Sioux I wouldn’t enjoy this film much. They are drunken louts whose chief, Spotted Horse (John Big Tree) is an old fool. This is one of the less attractive features of the movie.
As for the bandits, it is not quite explained why they are attacking Western Union, except in a vague way that they are Confederate guerrillas and the telegraph is Abe’s idea. They are led by Jack Slade (a rather hammy Barton MacLane, who had been in four other Randolph Scott/Zane Grey Westerns before this). Slade often appeared in Westerns as a bad guy/killer. 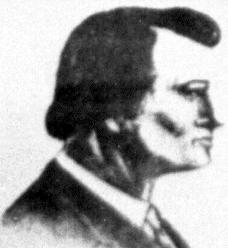 The real Jack Slade
.
But the Jack Slade in Western Union bears no resemblance to the real one, beyond the name.
.
.
It actually turns out that Vance Shaw is not Randy’s real name. He has adopted the surname Shaw, like Lawrence of Arabia, to hide his identity. His real name is –
.
.
But that would be telling.
There’s fine Edward Cronjager photography of House Rock Canyon AZ and Kanab and Zion National Park UT locations in Technicolor. Cronjager really was one of the greats. The original music by David Buttolph is absolutely excellent, with a traditional Western feel to it yet not at all clichéd.
.
. 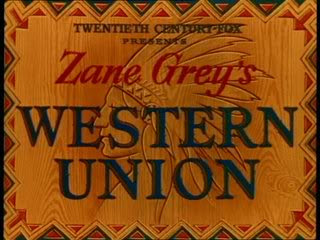 There are beautiful titles
.

The other actors are extremely good. We have John Carradine as a hardened doctor, Slim Summerville as an entertaining, vaudeville cowardly cook, and a bearded Chill Wills on the telegraph crew as the expectorant Homer Kettle (he comes to a rather uncomfortable end). Francis Ford is the eastbound stage driver and Jay Silverheels is hidden among the Indians. Yakima Canutt managed the stunts. Only Robert Young was weak, I felt. He was not cut out for Westerns. Chill comes to a sticky end
.
Lang believed in realism and wanted a huge forest fire on Fox’s back lot. Actors had asbestos clothing on underneath their costumes. Robert Young had his eyebrows singed off and Scott got minor burns.
.
.
John Ford’s daughter Barbara recalled watching Western Union with her pappy and when Scott held his hands over a campfire to burn off the rope that bound his wrists, Ford said, “Those are Randy’s wrists, that is real rope, that is real fire.”
.
.
Scott himself said, “Pioneering was no doubt a fine and noble calling, but compared to this job, Daniel Boone had a snap.”
.
.
The script packed in about everything that could possibly happen. Fritz Lang told Peter Bogdanovich:

The film was made after a book by Zane Grey but nothing from it was used in the picture but the title. I forget who wrote the script but they had to invent many things because in reality, nothing happened during the entire building of the line except that they ran out of wood for the telegraph poles … When the film was finished I found out that the laying of the line did not take half as long as the shooting of the picture!”

He might have added that the line cost Western Union $212,000 but the movie cost Fox a million…

But it was a major hit.

There’s an excellent final reel showdown in the streets of Omaha (starting in a barber shop) as Randy and the evil Jack Slade shoot it out.

There’s basically not much wrong with this Western and it’s a must-see.