.
.
If all else fails, make Rio Bravo again
.
.
Howard Hawks directs John Wayne – but this about as far from as you can get. It’s fun, I guess, it’s Wayne but it’s just a mainstream commercial Western of the late 60s and that’s that.
. 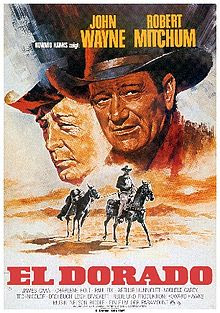 A sure-fire thing at the box-office anyway
.
It is pretty well a remake of Rio Bravo, also made by Hawks and Wayne, in 1959, for Warners. The good guys have to keep the bad guy in jail till the US marshal gets there and the bad guy’s henchmen are all out there waiting to kill them. This timeRobert Mitchum gets Dean Martin’s drunk lawman role and James Caan is the bumptious kid instead of Ricky Nelson. Walter Brennan as the cantankerous old deputy has been replaced by the nearest equivalent, Arthur Hunnicutt, who, however, has an interesting 1850 Colt Revolving Rifle instead of the usual boring Winchester. Arthur does a good job, as always.
.
.

Lee van Cleef’s cigar-smoking girlfriend Marie Gomez in Barquero is the only other Western character I’ve seen with one.

Mercifully, they cut out the jailhouse scene where, copying Dino/Brennan in Rio Bravo, Mitchum sings accompanied by Hunnicutt on harmonica. It was because Hawks’s son said, “A sheriff shouldn’t sing.” Astute.

Writer Leigh Brackett had done Rio Bravo and was obliged by Hawks and Wayne to plagiarize herself. The poor woman was forced to do it yet again in 1970 with Rio Lobo.
.
. 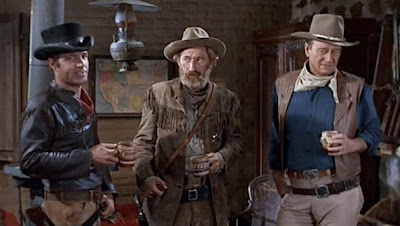 Nelson, Brennan, Way – oh, no, sorry, Caan, Hunnicutt, Wayne
.
Christopher George is excellent as the villainous, quick-on-the-draw hired gun. Some love interest is provided by Charlene Holt, in the Angie Dickinson role, and Michele Carey, in the tight leather pants role, who rather likes James Caan. And RG Armstrong and Jim Davis are in it too.
Best, of course, is Bob Mitchum. There is a report of a conversation he had with Hawks:
“You know you’re the biggest fraud I’ve ever met in my life,” said Hawks.
“How come?”
“You pretend you don’t care a damn thing … and you’re the hardest working so and so I’ve ever known.”
“Don’t tell anybody.”
. 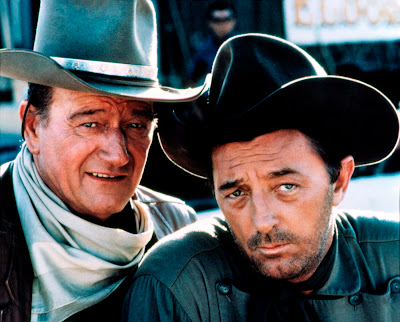 Don’t tell anybody
.
Not that Mitchum thought the picture was any good. He just enjoyed it.
The opening credits feature a series of nice original paintings, Remingtonesque, that depict various scenes of cowboy life. The artist was Olaf Wieghorst, who appears in the film as the gunsmith, Swede Larsen.
. 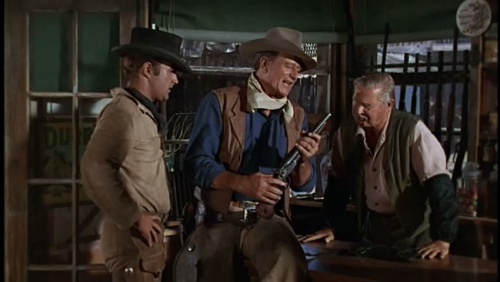 They buy a gun from The Swede

.
There are some gimmicks, like Caan’s hat and his sawn-off shotgun sidearm (he can’t even hit anything with that). He quotes Poe’s ‘El Dorado’ a lot.
.

The hat
.
There’s some decent Old Tucson and surroundings scenery (as in Rio Bravo), oddly mostly at night, but too much is shot in the studio. The Nelson Riddle music is undistinguished. There’s the inevitably cheesy title song. You can listen to it and see the attractive title paintings here.
Wayne is, sadly, unconvincing as the fastest gun in the West. He looks overweight and tired. He was 58.
It was a box-office smash everywhere it played. But the whole thing was a routine Western, I’m afraid, and only worth a DVD purchase if you are a committed Wayne fan or can’t resist Mitchum or want a fairly nostalgic evening.
Oh, you too?
. 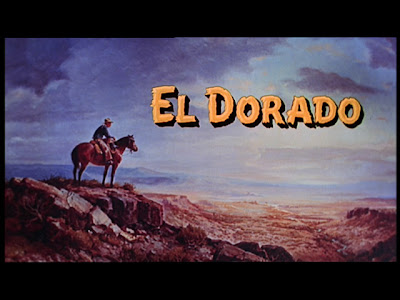