.
.
Old-fashioned but Preston Foster excellent
.
.
John Ford, no less, directed the first film version of the 1869 Bret Harte story The Outcasts of Poker Flat, in 1919, a silent obviously, with Harry Carey as gambler John Oakehurst. Tragically, that version no longer exists. Very few of the twenty-five silent films Ford made with Harry Carey Sr survive. It is very unlikely that a print of Outcasts will ever come to light, though you never know. The American Film Institute has a summary of its plot and it is clear that it was an extremely liberal interpretation of the story, really a sort of fantasia on the theme of Poker Flat.
The 1937 talkie version, also a very free rendition of the original story, was directed by DW Griffith-alumnus Christy Cabanne, who was involved, in one capacity or another, in thirteen silent Westerns, and directed eight talkie oaters, of which Poker Flat was the third. It starred an excellent Preston Foster, and introduced Van Heflin in his first Western (aged 26) as a worthy clergyman.
.
. 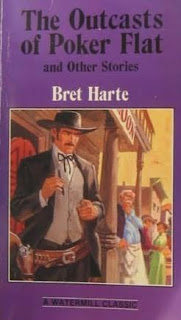 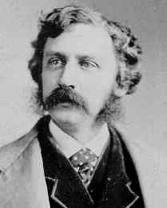 Bret Harte
.
In 1950 there was a pretty clunky radio version with Ward Bond. There was a further film remake The Outcasts of Poker Flat in 1952 with Dale Robertson as Oakehurst, a good edgy black & white noir, and later still a TV movie and one of the Kraft Theater TV series with George C Scott in the lead, both in 1958. So the story was a Western favorite, not to say perennial. There was even a spaghetti. 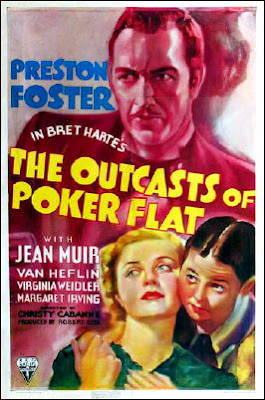 Great poster
It’s pretty corny though. In the 1937 version Oakehurst (Foster) the gambler, and his partner, the Duchess (Margaret Irving, in her only Western, the weakest actor of them all, very hammy) set up a saloon, The Gold Nugget, in Poker Flat, in gold-rush California in the early 1850s. Oakehurst’s cronies include Kentuck (Si Jenks) and Uncle Billy (Al St John) – so there are two Gabby Hayes/Walter Brennan-type old timers.  In a nod to another Harte story, The Luck of Roaring Camp, Oakehurst adopts the young daughter of a dead prostitute, whom he calls Luck – an outstandingly good performance by Virginia Weidler, 10, one of the best child actors I have ever seen.
.
. 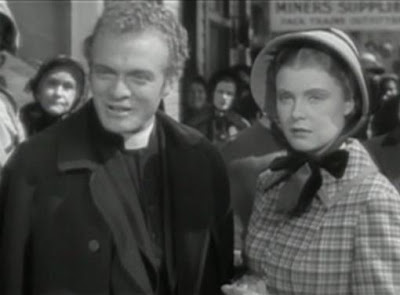 The Reverend Van Heflin and schoolma’am friend
.
The Reverend Sam Woods (Van Heflin), decent and gutsy, appears in town with prim schoolma’am Miss Colby (Jean Muir, again in her only Western), his “friend”, clearly destined to be Mrs Woods, but Miss C. takes more of a shine to rakish, dangerous Gambler John, putting the Duchess’s nose out of joint. Indeed, the whole ‘sporting’ community of Poker Flat is rather put out as Oakehurst appears to get religion and wants to clean up the town.
Most of this is not in the book, which, as you probably know, briefly deals with the undesirables being run out of town and then concentrates on the winter cabin scene. 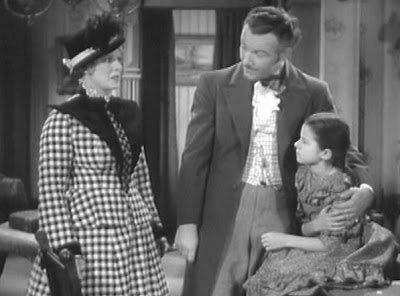 The Duchess, Oakehurst and Luck

.
Standing against the clean-up-the-town worthies and vigilantes are bandit Sonoma (Bradley Page, nine oaters, 1932 – 42, rather good) and his henchpersons, lowdown High-Grade (Richard Lane) and Indian Jim (good old Monte Blue). There’s business with a yellow ribbon, being apparently a Western version of the white feather.

The gunplay is quite realistic, with Oakehurst nervously hiding a derringer in his sleeve, the barman shooting Indian Joe (who was drunkenly shooting up the saloon he had been barred from) with a buffalo gun, and the Sonoma/Oakehurst duel in which the antagonists approach each other, their Navy Colts already drawn, until they are close enough for one of them to hit. That surely was how it happened, when it did happen at all, and not with the static quick-draw showdown beloved of Western movies.
The story climaxes with Oakehurst and both schoolmistress and saloon gal snowed in, up in a mountain cabin, and reaches a melodramatic conclusion which, dear e-readers, I shall not reveal.
Interesting as Van Heflin’s first Western, The Outcasts of Poker Flat is memorable for the first-class performance of Preston Foster. It was only his third Western – he’d appeared in a Richard Dix vehicle, The Arizonian, in 1935, and then the same year as male lead in the George Stevens-directed Annie Oakley with Barbara Stanwyck. He went on to do 20 more, such as the 1939 Geronimo, North West Mounted Police (1940), Ramrod (1947) and the 1953 Ronald Reagan Law and Order. I think he was very good.
Rather old-fashioned for the late 1930s, The Outcasts of Poker Flat is still quite a good Western and according to its lights worth a watch.