Man with the Gun (aka Deadly Peacemaker, The Trouble Shooter) has the classic town-tamer plot. A town treed by an arrogant rancher (cleverly never seen until the very last moment of the film) hires tough lawman Robert Mitchum to bring law ‘n’ order to the streets. 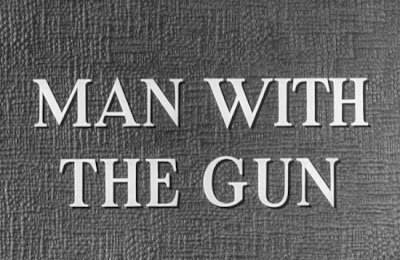 It’s a gray & white movie
.
The lack of this law is amply demonstrated in the very first shot. The movie opens with wonderful badman Leo Gordon (81 Westerns and nearly always the heavy) riding into town. A dog escapes the clutches of his owner, a small boy, and barks at the rider. Gordon shoots it. This is absolutely classic in the first reel of a Western: time and again the goodiness or baddiness of a character is established by that person being nice or brutal to a child or animal. It’s an immediately recognizable code. Watch out for it in your Westerns; you’ll see what I mean. By shooting a little boy’s dog, Leo was being lowdown to both an animal and a child. Boy, is that mean. This goes at least as far back as Tumbleweeds (1925) and probably earlier still. In Tumbleweeds, badman J Gordon Russell is seen in his first appearance beating a boy. The boy has a puppy which he also mistreats. William S Hart dunks Russell in the water trough and makes him apologize to both boy and dog. Great stuff. Compare this to the ‘hero’ in the first reel of A Fistful of Dollars watching a child be mistreated without intervening. You can tell it wasn’t a proper Western.
.
.
Man with the Gun was director and writer Richard Wilson’s first Western (although he’d produced a B-movie the year before, Ricochet Romance…) Actually, he did very well. The film is pretty much a lowish-budget Western, yes, but it’s tightly directed and well put together. The acting is perfectly adequate and there’s a tension throughout.
.
. 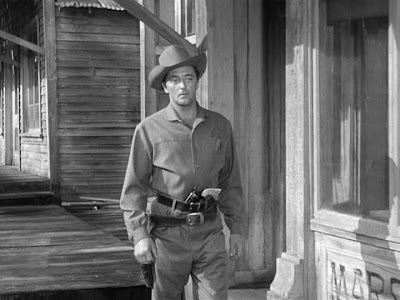 Town tamer
.
Robert Mitchum, in his first Western after leaving RKO, kinda sleepwalks through it, as he usually did (he used to say that they painted eyeballs onto his closed eyelids), but occasionally he turns the autopilot off and comes to life.  When he hears that his daughter is dead, he teeters on the edge of madness, losing his usual icy calm and indulging in killing and arson by shooting the owner of the Palace Saloon, then burning it down. But then he regains control (and goes back on auto).
Like all good town tamers (there are so many) he insists on doing it his way without interference and, as in all such movies, the townsfolk who have hired him dislike his methods and want to get rid of him. They want the end result but are not prepared to pay the price. That’s the standard plot and Man with the Gun is no different in this respect.
The print available now is in a curiously washed-out black & white and so everyone is in many shades of gray. This doesn’t help the several times referred-to point that Mitchum dresses all in gray. Well, yes, they all do.
.
. 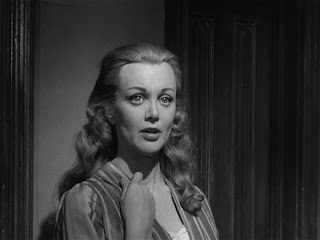 Jan Sterling. Strong.
.
There are (of course) two women. The lead is Jan Sterling as Mitchum’s estranged wife. She is a Madam, running the girls in the Palace. Sterling had a strong, rather than beautiful face. She’d been ‘the other woman’ to Rhonda Fleming in Pony Express in ’53 and this was her fifth Western. Here, she is bitter and angry, so much so that the dénouement is rather implausible. The ingénue is Karen Sharpe, who is engaged to angry-young-man John Lupton (the coward-poet in Escape from Fort Bravo) but wonders if she wouldn’t do better with Bob…
.
. 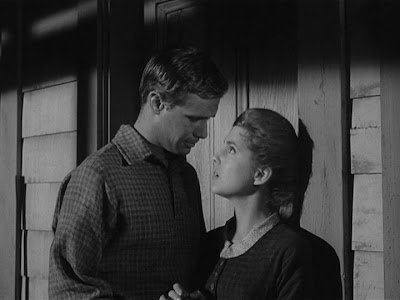 The two best actors, though, are Henry Hull as the sheriff who’s lost his nerve and Emile Meyer as the blacksmith leader of the town council. We think of Hull in a suit chewing the scenery as a judge or newspaper editor usually (Jesse James, Proud Rebel, Rimfire, etc) but here he is in range duds and gunbelt. He’s rather good in the part, though. He keeps his overacting in check, in line with his role, and his performance benefits.
.
. 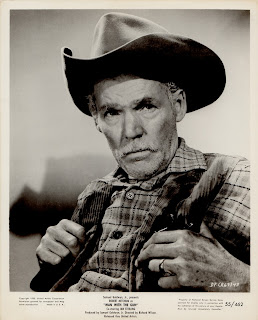 Henry Hull
.
Meyer, whom we think of usually as Ryker in Shane, did a lot of good work as a character actor in Westerns. You’ll spot him quite often, especially later in TV Westerns. He was very good.
James Westerfield, a favorite of mine, appears in town as a drummer but acts as a kind of Greek chorus, observing and commenting on the action. It’s rather well done.
Claude Akins is (briefly) a heavy, sadly uncredited. He tries to go up against two-Colt Mitchum by using a sneaky hideout gun (almost a derringer but not quite) in his hat. Mistake.
.
. 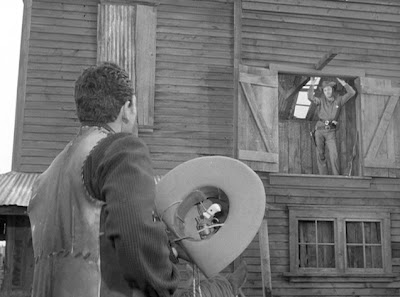 Sneaky
.
Angie Dickinson, in only her third Western and long before Rio Bravo and stardom, is one of the saloon girls.
I just love the hugely fat rancher (Joe Barry) who has been the cause of all the trouble. He comes into town in a buggy: no horse would bear his weight. In his wordless part he is menacing and sinister.
.
. 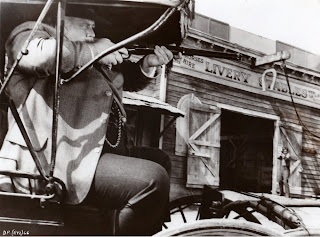 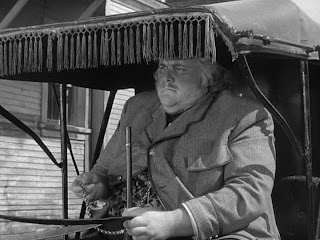 .
All in all, although Robert Mitchum didn’t really give it more than his usual competent professionalism, Man with the Gun is a very watchable Western and worth a look. 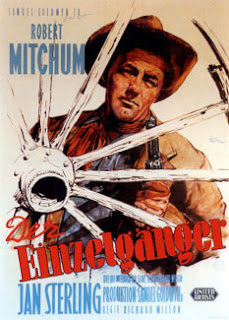