In 1946, new Universal boss William Goetz decided to abandon low-budget second features to concentrate on bigger pictures and he leased Universal’s entire back catalog of programmers to Jack Broder and Joseph Harris, who marketed the movies, often with new, more lurid titles, to theaters under the Realart Pictures brand. These included many Westerns.

One of them was The Bushwhackers, sometimes dropping the second h and becoming The Bushwackers, and also known as The Rebel. It’s a noirish 70-minute black & white Western of surprising quality.
.
. 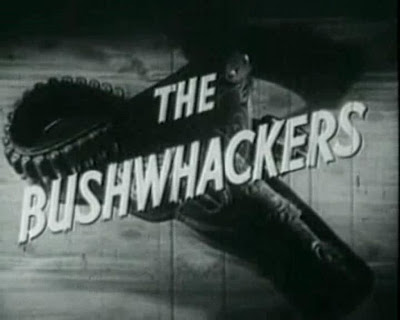 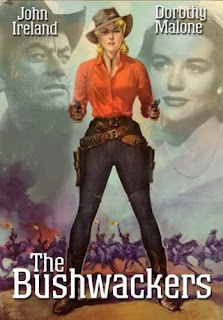 This poster seems to have elevated Myrna Dell to female lead
.
The story tells of a Confederate soldier, Jefferson Waring (John Ireland) who, at the end of the Civil War, swears never to raise a gun against a man again. We’ve heard that before and it’s a sure sign that later in the film he will be obliged to. He arrives in Independence, Missouri, where he witnesses the murder and burning out of homesteaders by paid thugs but, gunless, does nothing. He finds work with the cowed editor of the local newspaper (Frank Marlowe, strong) whose feisty daughter, Cathy (Dorothy Malone, beautiful; she had been very good in The Nevadan the year before) wants to expose the rich rancher responsible.

For yes, we are in classic ruthless rancher vs. sturdy homesteader territory. The evil rancher is Artemus Taylor (Lon Chaney, even more crippled with arthritis than he was to be the following year in High Noon). He has an even eviler daughter, Norah (Myrna Dell, 13 Westerns, splendidly malignant in her pants and gunbelt, like Joan Crawford in Johnny Guitar but more murderous). His thugs are led by Sam Tobin (famous on- and off-screen rowdy Lawrence Tierney).

Ireland, brooding, Malone, wondering
.
Artemus has a bought-and-paid-for marshal (Wayne Morris, outstandingly good) who has a stupid deputy (Norman Leavitt, amusing) and is in cahoots with the crooked and smarmy banker (Charles Trowbridge, in his last Western), as tradition dictates. Bankers in Westerns were rarely anything other than crooked and smarmy. And, as trad equally dictates, the railroad is surveying the area, driving up the land values.
Of course, Reb Jeff is finally obliged to strap on a gun…
Well, so far, so predictable and you might think you were in for a standard B oater. But nay, it turns out to be a tight little gripper.
.
.

It isn’t really about “Revenge in its naked fury” though
.
Why? The first reason is John Ireland (1914 – 1992). He was an underrated, excellent actor who put in performance after performance of quality as a tough guy hero but more usually heavy. Canadian born, raised in New York, he emerged as an actor after the Second War and got roles as brooding badman in many low- and mid-budget pictures. Occasionally he rose to the heights of smallish but key parts in A-movies, such as his Cherry Valance in Red River or his Crixus in Spartacus. He was famed for his rowdy lifestyle. With his son Peter and wife Joanne Dru he co-produced and co-directed the cult Western Hannah Lee: An American Primitive (also Realart), a film about Tom Horn (in a way) in 1953. He was to have played the Ponderosa patriarch in Bonanza: The Next Generation in 1988 but the series was not picked up. In later years he ran a restaurant, Ireland’s, in Santa Barbara. Interesting fellow. His best performances were probably Cherry Valance, the bad guy in Vengeance Valley, Lloyd Bridges’s rival in Little Big Horn and, yes, The Bushwhackers.
.
. 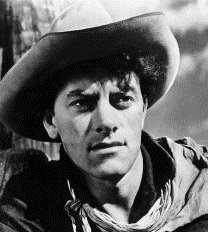 John Ireland in Red River
.
Secondly, the quality of the writing. The script is subtle, nuanced and clever. Considering the clunkiness of the basic plot, it is brilliantly done. It was partly written by the director, Rod Amateau, not a Western expert (he only did this and worked with Blake Edwards on Sunset) and Tom Gries; I am sure it was more Gries than Amateau because Gries was a talented writer and director of Westerns. This was his first, and he went on to be associate producer on The Lusty Men, and later to write and direct the outstanding Will Penny in 1968 and the fun 100 Rifles the year after. It’s a good Western CV. Especially notable in the script is the delicate balance between paid lackey and dignified lawman struck by the marshal. It’s an unusually subtle part.
.
.

Tom Gries
.
And as if that weren’t enough reason for praising the movie, Jack Elam is one of the evil thugs.
Well, what more do you want?