.
.
Indy and Bond take on strangers from outa town
.
.
We haven’t (tragically) had a huge number of movie Westerns this century. Several of the good ones that have appeared have been fairly traditional in style and content. Films like the remake of 3:10 to Yuma, Appaloosa or Open Range, all hugely enjoyable Westerns, I thought, appealed, however, to a certain demographic. Many in the audience, including your Jeff, probably came from what sociologists technically call the Old Fogey segment of society. I don’t recall a huge number of kids in the audience.
But we need the younger generation to come to see Westerns. If not, the genre will shrivel and die. Dread thought! Rango in 2011 was popular with juniors (and their parents too) and very good it is. Cowboys & Aliens the same year was probably an attempt to appeal to Rango-goers’ older brothers and sisters. And while I personally can do without bug-eyed monsters and spaceships in my oaters, I have no objection whatsoever to Hollywood including them. I mean, at least we get a Western, and if the under-90s are drawn into the movie theater to see one, so much the better, eh?
.
.

Who’s gonna win?
.
Anyway, I was there the night it opened at a movie theater in Paris. And while I was skeptical and braced for stupidity, and indeed the monsters did rather resemble the offspring of King Kong’s marriage to a green lobster, I was actually pleasantly surprised. It was quite witty. I enjoyed myself.
The first part, especially, is almost a proper Western. Daniel Craig, 007, joins the roster of Brit actors doing (surprisingly) well in Westerns. He is a lone stranger with mysterious past. Once you get past the bracelet he discovers on regaining consciousness in a desert, NMT, which he seems to have forgotten to have taken off after Q gave it to him on the last movie, you find he’s rather good as a Clintesque Western hard man who makes the word laconic seem downright gabby. Although he has amnesia, like Jason Bourne he hasn’t forgotten how to punch people out or put them away. He deals most satisfactorily with a few dirty thugs in the first reel. Then he sorts out the local cattle baron’s bullying son. Later, he does, disappointingly and droopily, sigh a bit over his dead wife (get over it, Dan) but most of the time he’s rather good standing up to people. And not only people.
.
. 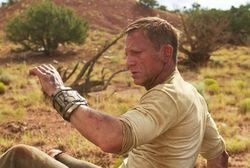 What the…?
.
The above-mentioned cattle baron is played by Harrison Ford. Now Mr Ford began his career, way back in the late 1960s, with Westerns. In fact his very first credited part as an actor was in an episode of The Virginian on TV, in 1967, and the same year he appeared (very briefly) as a US cavalry lieutenant in a (not very good) Glenn Ford Western, A Time for Killing. He was in a James Caan movie A Journey to Shiloh and a Don Murray TV Western The Intruders. Appearances in 1970s episodes of Gunsmoke and Kung Fu followed. Yup, Harrison was all set for Western stardom. Then in 1979 came the quite dreadful The Frisco Kid. This was so very awful, and Harrison was so very embarrassingly bad in it, that that was it for Westerns. He must (quite sensibly) have decided never to appear in another one. More than thirty years passed before he was inveigled back into wearing a non-Indiana Stetson in Aliens.

Sadly, he wasn’t very good in that either. Can it be me or is Harrison Ford not a very good actor? That can’t be true, can it? I mean he’s Harrison Ford. You can’t be rude about Indiana Jones. But I fear he doesn’t convince as the grouchy, bossy cattle baron with the crazed son. True, his steers are barbecued by alien death rays and it isn’t too easy to take that in your thespian stride. And his name is Woodrow Dolarhyde. But I guess at least his appearance allows Indiana Jones to sock James Bond on the jaw. 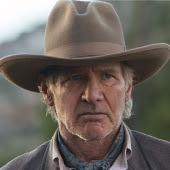 Extra with a hat? Great hat though.
.
Lesser parts include stereotypical cowboys like Sam Rockwell as a bespectacled saloon owner being bullied by Paul Dano as a spoilt-brat-with-a-gun rich rancher’s son, doing a Tab Hunter in Gunman’s Walk or something. Nothing new is attempted here (not until the aliens attack anyway) but these parts are adequately done.
.
.

Rockwell rather good
.
There’s a kind of adopted-son ranch foreman far more worthy of inheriting than the wastrel son, a bit like Burt in Vengeance Valley. Keith Carradine is the sheriff so that’s good and he throws the rancher’s son into jail, like John T Chance imprisoning Claude Akins.
.
. 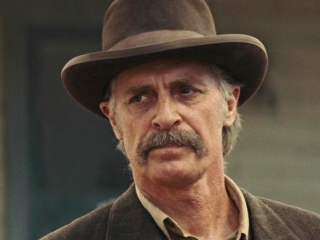 Sheriff K Carradine
.
There are the obligatory girls. One, Olivia Wilde (the “film industry’s babe du jour”, I am informed) turns out to be from out of town.
.
. 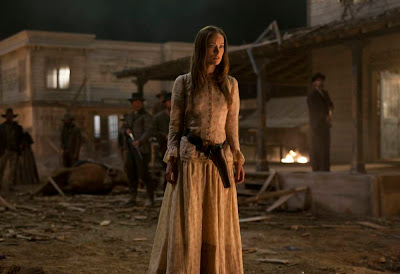 .
In the good old days the various townspeople, mysterious stranger, etc. would have banded together against the Apaches. Now the Apaches join the attackees and have been replaced as attackers by aliens, whom (or which) it is more PC to exterminate.
The cowboys probably admired the extra-terrestrials’ lassoing skills anyway.
.
. 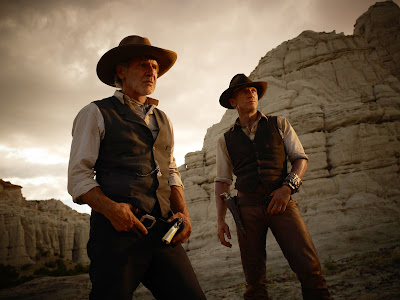 Six-guns v ray-guns
.
I understand that Jon Favreau, the director, specializes in blockbuster semi-sci-fi action movies like Iron Man (not an art film that I have seen) so I suppose he was in his element with the aliens anyway. But he also seems quite literate in the West. Enough to quote anyway.
You expect mysterious strangers in Westerns but you don’t really expect them to be from other galaxies. Although the title is quite upfront and funny, the movie is not played directly for laughs. The characters are deadly serious about it all, which is a better way to do it. Ron Howard and Steven Spielberg were among the producers. They knew Westerns and other worlds, respectively. There’s quite Westernish photography from Matthew Libatique with loads of landscape and some quite Elmer Bernsteiny music by Harry Gregson-Williams.
.
. 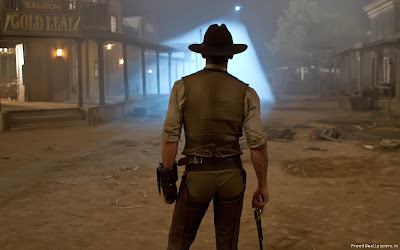 .
The movie didn’t do very good business, which was a pity (there were quite a few juvenile summer blockbusters in competition that year) and it almost put Disney, the makers of The Lone Ranger off, though luckily didn’t. Still, I liked it and would watch it again, even if I have other DVDs to buy before that one.