The Friends of Pancho Villa by James Carlos Blake

.
.
Gripping
.
.
An excellent way to get into the characters and events of Pancho Villa’s part in the Mexican revolution is to read The Friends of Pancho Villa by James Carlos Blake (Berkley Books, New York, 1996).
Mr Blake is a third-generation Mexican born in Tampico in 1947. His ancestors were British, American, Mexican and Irish. He grew up in Brownsville and attended high school in Miami and college in Tampa. He is a naturalized American citizen.
.
. 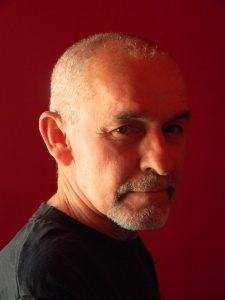 James Carlos Blake
.
His first novel, The Pistoleer (1995), is a life of the Texas killer John Wesley Hardin. It is a very well written book, told in the first person by a great number of characters, including Hardin himself. It paints a detailed and fascinating picture of Reconstruction-era Texas.
The Friends of Pancho Villa was his second novel. There is talk that Emir Kusturica is going to make a film of it this year. Originally Johnny Depp was bruited as the star but that idea seems to have fallen by the wayside.
.
. 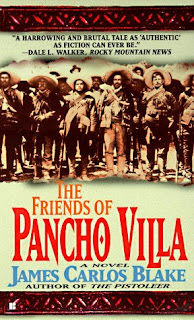 Very readable
.
Mr Blake seems to have a penchant for writing novels about some of the most unsavory characters of southern American history. A fundamental difficulty of reading The Pistoleer is how repulsive JW Hardin was. Wildwood Boys (2000) had the odious Bloody Bill Anderson as its central character. And The Friends of Pancho Villa tells the story in the first person as recounted by the even more detestable Rodolfo Fierro.
Rodolfo Fierro (1880 – 1915) was born in Sinaloa and as a Federal officer participated in the unbelievably brutal suppression of the Yaqui Indians before working as a railroad man. His skills in both extermination and trains were invaluable to Villa.
.
. 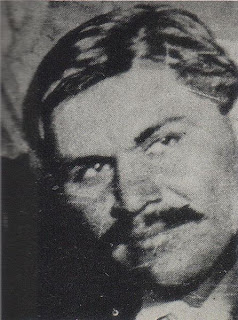 Rodolfo Fierro (1880 – 1915), el carnicero
.
He came to prominence during the Battle of Tierra Blanca in November 1913 when he filled a locomotive with dynamite and rammed it into a Federal train, destroying the rearmost cars. Then, in a scene that could have been lifted from countless Western movies, he galloped alongside the rest of the escaping Federal train, leaped aboard, ran along the top of the cars, shot the engineer and boilerman and brought the locomotive to a halt. All Federal prisoners on the train were then murdered.
Fierro became known as el carnicero. He earned this soubriquet after executing close to 300 captured soldiers himself, with pistols. They were freed in groups of ten to flee and Fierro shot them, his soldiers reloading the pistols. It took two hours. On another occasion a man sitting across from Fierro argued that a man shot would fall backwards; Fierro disagreed. To settle the bet Fierro shot the man, and watched as he fell forward. John Reed reported that he shot another man who spoke to him in Durango, with the words, “You! How dare you speak to me before I speak to you first!” He would shoot railroad workers if a train was late.
In February 1914 Fierro ‘disposed of’ rich English rancher William Benton, who had protested vehemently to Villa. There were severe political repercussions for years afterwards.

Certainly Fierro seems to have been a very close confidant of Villa, if not his right hand man. 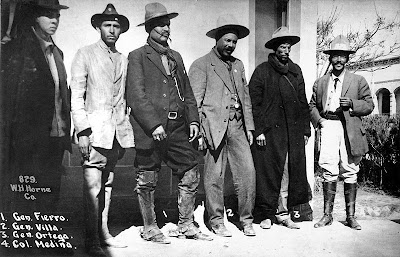 Fierro at Villa’s right – his right hand man
.
In January 1915, Villa turned over command of the western forces to Fierro and Calixto Contreras. Fierro and Contreras were immediately defeated and Villa was forced to divert troops to North West Mexico to assist them. In March Fierro was again defeated, losing two thousand men and having to abandon Guadalajara.
On 14 October 1915, Fierro was thrown from his horse and landed in quicksand at the Casas Grandes Lagoon. It is said that his soldiers feared and hated him so much that they ignored his cries for help, and watched as he was sucked down by the weight of the gold in his money belt.
Such were the bare bones of the career of Rodolfo Fierro. To make such a person your ‘hero’, or at least your central character, is a risky business. Blake manages, more or less, to pull it off and if you can’t sympathize with Fierro, you do at least manage to see the revolution through his eyes.
Blake uses an artifice which also risks scuppering the whole tale: he has Fierro escape from the quicksand, change his name and continue at Villa’s side. He is even present at the assassination in Parral in 1923. Fierro escapes the shooting and lives to tell the tale. You have to suspend credibility but of course the device is dramatically necessary, and it is a novel after all. Readers might say well, it could have happened like that, I suppose.
You get the sense that just as in Wildwood Boys the guerrilla fighting in the Civil War set free Bill Anderson to rampage and kill, and in The Pistoleer the post-Civil War period in Texas liberated John Wesley Hardin on his murderous career, so too the revolution released Fierro’s deepest and basest urges to violence. Blake understands that more than a revolution, those years in Mexico were civil war, a civil war of unparalleled ferocity. Fierro’s narrative explains the complex political maneuvers with a deft touch.
Whatever you might think of Blake’s subjects or his politics, one fact is undeniable: the quality of the writing. His prose is highly-colored, often original, sometimes poetic. The narrative is gripping. And in this one we get a picture of Pancho Villa that is real, human, plausible and actually compelling.