.
.
British Western filmed in Spain
.
.
Eurowesterns are named for foodstuffs. If Italian or Spanish cowboy movies are called spaghetti or paella westerns and such films made in Israel are matzo-ball ones, then this is a shepherd’s pie western, named for the stodgy fare the Brits enjoy. The producer and associate producer were British, as were the director, Peter Collinson (The Italian Job), cameraman John Cabrera, and second lead Stephen Boyd. But why not? The Brits actually made quite a few Westerns, some of them, like Shalako, even quite good. This one followed on from Catlow, a British offering from 1971 directed by Sam Wanamaker and starring Yul Brynner. Catlow wasn’t good. This one is a bit better.
.
. 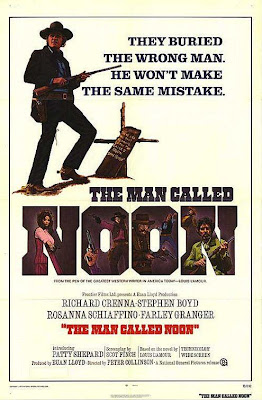 But High Noon it ain’t
.
The Man Called Noon definitely has the look of a spaghetti: filmed in Spain, Roman production company, grunty dialogue (Scot Finch from a Louis L’Amour novel), loads of Italian and Spanish names in the credits, slushy woo-woo music (Luis Bacalov). But it’s a cut above the average Italian pulp. The production values are higher, the photography is classier and the sound better. There’s a train.
The hero (Richard Crenna, who had also been in Catlow) has received a knock on the head and has lost his memory. Who is he? Cowboys & Aliens opened with that idea too. Could he be the feared assassin Noon? Rosanna Schiaffino sees that he is good and falls in love with him. The evil Peg Cullane (Patty Shepard) tries to kill him. She is this film’s Mercedes McCambridge to la Schiaffino’s Joan Crawford, although neither is a patch on those stars of Johnny Guitar. There’s buried gold and double-crosses and so forth.
.
. 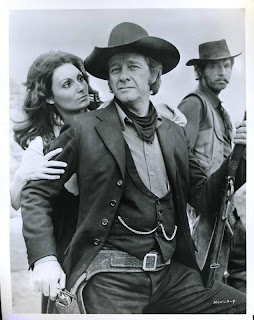 Rosanna, Richard, Steve
.
On the DVD box, American TV actor Crenna is compared to John Wayne and even Gary Cooper. Absurd. Actually, if anything, he looks like a young Johnny Cash. But he is solid enough and reasonably convincing in the mysterious ‘man with no name’ role. Boyd is also competent as his sidekick, slightly Richard Boonesque.
.
. 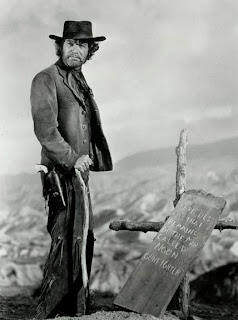 A Boone-ish Boyd
.
San Jose (Cal)-born Farley Granger is the judge. He was in a few TV Westerns in the 50s and 60s and in a couple of spaghettis. He isn’t very good.
There’s a scene which perhaps refers to High Noon or Once Upon a Time in the West as the two heroes wait for a train in a ruined Hadleyville-esque railroad station.
The cinematography is sometimes quite good, with carefully framed scenes, a lot of darkness and strong contrast.
There’s a bit where a thrown knife sticks in the throat of a corpse. Overkill?
.
PrevPreviousThe Star Packer (Lone Star/Monogram, 1934)
NextRide Him, Cowboy (Warner Bros, 1932)Next