The Son by Philipp Meyer

Situated in Western novel terms somewhere between the literary weight of Cormac McCarthy and the sweeping scope of Larry McMurtry, The Son by Philipp Meyer (Simon & Schuster, 2013) is a fine read.
.
. 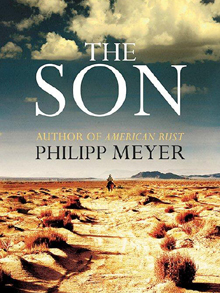 .
It’s one of those books that tell the story of several generations of a family and, as is the norm these days, it flits between the various protagonists and various historical periods. This can be annoying at first and you most definitely need the family tree that is provided at the beginning; you often have to flip back to it to see who we are talking about here. But it soon settles down into a regular pattern of three people and you are drawn into the saga.
The first of the three, the patriarch of the family who dominates the life of all its members (for good or ill) as he dominates the book, is Eli McCullogh. His story is told in the first person, ‘taken from a 1936 WPA Recording’, when he is 100 years old. Born on the day Texas becomes a republic, Eli grows up the hard way in a dangerous land, on a pioneer farm in Texas. It is for its tough Texas setting also that we think of McCarthy and McMurtry. At the age of thirteen Eli is captured in a terrible raid on his family’s farm. His mother and sister are raped and killed and his weaker brother is also later murdered by the Comanches. The violence of these scenes and indeed subsequent descriptions of killing and torture are described as pitilessly as the brutalities were inflicted. There are echoes of Blood Meridian here as we are told of the depredations of the Comanches and later the Texas Rangers. Eli integrates well, all too well, into the tribe and only leaves when his new family is destroyed by smallpox. He returns to ‘civilization’, has difficulty in readjusting, joins the Rangers, fights for the Confederacy, marries unhappily, or rather indifferently. He builds a cattle empire, then an oil one.
Then we have Eli’s son, Peter. His story is also told in the first person, in the form of extracts from his diaries, from 1916 and 1917. He is a decent man, well-read and melancholic, more troubled by moral questions than his father. Central to his third of the story is the destruction of almost the entire neighbor family as the McCulloghs, with the aid of local law officers and vigilantes, murder the Garcias, including women and children, and expropriate their land in an assault the equal of any Comanche raid. This event poisons Peter’s life and undermines the later loving relationship he develops with the sole survivor of the Garcia massacre. Peter is at once the most sympathetic and the most maddening of the McCulloghs.
Jeanne Anne McCullogh, Jeannie, Peter’s granddaughter, completes the story from a later point of view. Her part is told in the third person and is slightly more detached for that reason. It gives us perspective and retrospective. Jeanne has inherited her great-grandfather’s fire and empire-building talents. She becomes an oil baron(ess), a woman CEO in the 1950s and 60s before it was common (and it still isn’t that common). You get the sense that she alternately spoils and ignores her children as she jets around the world and how the subsequent generations suffer and weaken as a result.
.
. 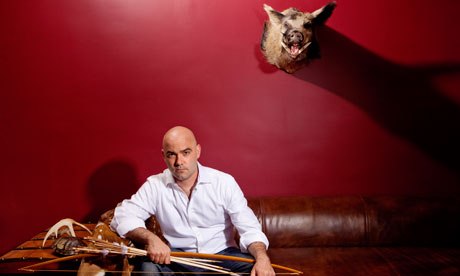 Philipp Meyer, born Baltimore 1974, author of American Rust and The Son, now lives in Austin
.
At the end, the regular triangular pattern of Eli, Peter and Jeannie is broken as a final character makes his appearance but I will not say who that is; read the book!
The human interactions in the whole novel are subtly and movingly done. Like many families, the McCulloghs have their triumphs and periods of joy as well as their tragedies, losses and failures. There is a sense of rise and almost Gibbonish fall as the family fortunes wax under the mighty Eli, grow into huge oil wealth and then decline as later generations weaken and are enfeebled – as much, it is suggested, because of ‘modern times’ as their own inherent failings. Wealth corrupts.
A central theme is how ‘civilization’, by which in this context is meant Anglo expansion westward and southward into Native American, Mexican and virgin lands, had a huge price to pay: the plundering exploitation of these natural resources, the destruction of natural beauty and above all the annihilation of whole peoples and their cultures is deeply shocking. Early on, Eli tells us “the land and all the animals who lived upon it were fat and slick. Grass up to the chest, the soil deep and black in the bottoms and even the steepest hillsides overrun with wildflowers … the country was rich with life the way it is rotten with people today.” Peter tells us “that is the story of the human race. Soil to sand, fertile to barren, fruit to thorns. It is all we know how to do.”
The story is clearly deeply researched though it wears its knowledge lightly. Just occasionally, especially while Eli is living with the Comanches, we get the sense that we are being instructed almost forensically in Comanche lore and lifestyle but personally, as it was so gripping, I didn’t mind. For the rest, the details and historical verisimilitude seem completely natural and do not intrude whatsoever.
.
.
Meyer’s writing style is less original and more conventional than McCarthy’s (he uses inverted commas for speech, for example) and less consciously poetic but it is appropriate, spare, unflowery and sometimes reminds you of Hemingway. The English is standard (though studded with occasional, colorful local vernacular).
The Wall Street Journal asked if Philipp Meyer is the next William Faulkner. No, that position is already occupied (by Cormac McCarthy). But he’s a damned good writer nonetheless.
I must admit that I didn’t care all that much for Meyer’s 2005 debut novel American Rust. Oh, I could see the quality but it didn’t grip me and carry me along. Perhaps it was the post-industrial theme and setting. But The Son is a superb achievement. It would make a fine Western movie.

PrevPreviousCochise in fact and fiction
NextSupport Your Local Sheriff! (UA, 1969) & Support Your Local Gunfighter (UA, 1971)Next
Jeff Arnold © 2023 – All rights reserved – Designed by BetterCallChris
Scroll Up