I’ve been meaning to review this movie for some time as it is one of my favorites. There are some dolts who say it isn’t a Western but they know nothing.
.
. 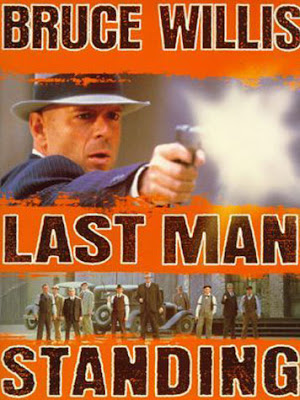 Great movie
.
On the surface, yes, this is a gangster film of classic proportions. Set in Prohibition West Texas, it tells of rival bootlegging gangs and a lone gunman who plays one mob off against the other. Sound familiar? It should. It’s A Fistful of Dollars remade, and of course Fistful was Yojimbo remade and anyway they are all based on Dashiell Hammett’s Red Harvest (also made into a gangster movie), if not, indeed, Goldoni’s A Servant of Two Masters (1743), at least according to a pleading Sergio Leone. This story has been around.
However, this is ten times better than A Fistful of Dollars. The Chandleresque first-person voiceover of the hero gives a depth to the character that Leone never managed with Eastwood. And Bruce Willis is superb, a true Western hero. He is tough and outwardly just a cynical gun for hire but we come to see the integrity beneath as he cleans up the town. Actually, he cleans it out rather than cleaning it up. This is one of Willis’s best roles. He is of course a man with no name – well, he goes by ‘John Smith’ but that’s pretty much the same thing.
.
. The man with not much of a name
.
Then there is outstanding support acting. We might mention in particular my hero Bruce Dern as the corrupt sheriff. Dern did Western bad guys supremely well for many years but he was rarely better than the complex character he portrays here.
.
. It’s rude to point
.
In a very short part, Ken Jenkins also takes honors for his Ranger captain, icy in the torrid heat. Ted Markland as the silent Deputy Bob, RD Call as the dumb Irish heavy, William Sanderson (always excellent, Lippy in Lonesome Dove and EB Farnum in Deadwood) as the saloon keeper Joe, these are all first class.
Christopher Walken is positively psychopathic as the chief Doyle shooter. We are told that at 15 he burned down an orphanage and enjoyed watching the “little kids go up like candles.” Oo, that’s bad. The Italians are very good too: Ned Eisenberg doesn’t sound too Italian but he has the gestures and style pat as chief mobster Strozzi and Michael Imperioli, who does sound Italian alright, later to appear in The Sopranos, is first class as Strozzi’s cousin Giorgio. You have to check the credits to see they are Strozzi, though, because they are always referred to by Bruce as Strasi.
.
.

Smiling psycopath
.
Those haircuts! Weren’t they hideous? But very realistic. Nice cars too. Bruce rides into the town of Jericho (which looks very Western) in a 1928 Model A Ford, a twentieth century equivalent of Clint’s mule.
The picture has an orange tint, or perhaps blood-red. This has got redder and redder as my VHS tape ages but that’s fine. It suits it. The heat and dust permeate through the screen at you. There’s very fine Lloyd Ahern photography of El Paso and New Mexico locations. Ahern had shot both Geronimo and Wild Bill for Walter Hill so has the credentials.
.
.

Automobiles
.
The music is by Ry Cooder and manages to give us menace, gangsterism, Mexico and a Western all in a modern key. I must get that soundtrack on my phone. Elmer Bernstein had been hired but was fired for not getting the tone right. Ry is perfect.
This film is sometimes over the top. When Bruce shoots mobsters with his twin Colt 1911 45s the shot badmen fly through the air and into the street in Desperado fashion. It verges on a cartoon. But boy, do they stay shot.
.
. Blam! Blam!
.
It’s funny, isn’t it, how critics can vary so much in their opinions. The late, respected Roger Ebert called this movie “a mannered, juiceless, excruciatingly repetitive exercise in style.” Oh well, other critics than I have a right to their opinions. Anyone has the right to be wrong.
The dark scenes where Bruce gets beaten up and recovers with help to get his revenge reminded me of Unforgiven. It’s a Western alright. Walter Hill, the director, did Westerns (he once said that all his films were Westerns and when you watch this one you see his point) and he wrote this one as well, giving due credit – unlike Fistful – to Kikushima and Kurosawa. There is something son-of-Sam about Mr Hill and the Peckinpah influence is there alright.
It’s a great title. And the pictures of Hickok on the hotel wall and a print of Custer’s Last Stand aren’t an accident.
.
.
A really good Western..
.
.