.
.
Re-re-make
.
.
Remakes were part and parcel of Hollywood. It was natural to try to cash in on a theatrical success for a new generation and studios also liked to remake silents into talkies and black & white movies into color ones. Take a film like The Spoilers: it was made in 1914, 1923, 1930, 1942 and 1955. Sometimes the remakes were great successes (it’s the fourth Spoilers we all know and remember and the third Maltese Falcon) but more usually the remakes were pale imitations.
It was unusual, however, for a director to remake his own film. Raoul Walsh remade his noir High Sierra into the Joel McCrea Western Colorado Territory (Warner Bros, 1949), and his war film Objective, Burma! became the Gary Cooper oater (Warner Bros, 1951). George Marshall went one step further: he had directed Marlene Dietrich and James Stewart in the famous 1939 Destry Rides Again (itself a remake of the silent Tom Mix one) and he directed Mari Blanchard and Audie Murphy in Destry, an almost exact copy, fifteen years later.
.
. 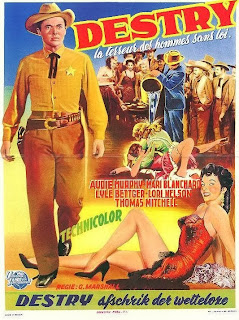 Lacks punch
.
Mari Blanchard, Dan Duryea’s saloon partner in Rails into Laramie, was back in the saloon in the Frenchy part. Perhaps to differentiate her from Shelley Winters in Universal’s earlier, non-Marshall remake, Frenchie (1950), Mari was called Brandy. She does the job competently, singing, dancing and wiping off her ‘warpaint’ for the sake of Destry.
Taking over from James Stewart was always going to be very challenging and poor Audie Murphy was doomed from the get go. To be fair to Audie, he was enormously popular in the 1950s, rivaling John Wayne and Randolph Scott as a box-office Western star, and furthermore his baby-faced modesty and quiet manners were ideal for the part. But how are you going to follow Jimmy Stewart’s Destry? Audie does his best and he wasn’t half as bad an actor as he thought himself to be, as great performances in such Westerns as The Unforgiven proved. But it was a hard act to follow.
.
.

Audie as Tom Destry
.
The ’54 Destry does have two great character actors in small parts, Thomas Mitchell as the town drunk made sheriff (Mitchell of course did drunks, as all Stagecoach  fans knew) and the great Edgar Buchanan as the rascally mayor, who is an artist this time, not a chess player. The little boy is Lee Aaker from High Noon and Hondo and of course Rin Tin Tin. He was much better than many of the child actors in Westerns, having a bit of oomph.
.
.

Mitchell as drunk turned sheriff
.
I always like Lyle Bettger and he is excellent in the Brian Donlevy part as the slimy saloon owner with a derringer but his heavies were weak. The parts cried out for bad guys of the quality of Jack Elam and Leo Gordon.
.
.

Bettger good as dress heavy and Blanchard OK in the Dietrich part
but they are watched by bland henchmen
.
The Mischa Auer part of Boris has been written out and replaced by a henpecked Doc Curtis (the great Wallace Ford) who loses his wife’s new hat at the gaming tables rather than his pants. That was probably considered safer for a ‘family’ movie. Frenchy’s ‘amusing’ black maid has also disappeared. Wise.
Audie’s Tom Destry ties complex knots in pieces of rope rather than whittling (Joel McCrea’s Tom in Frenchie whittles though). The town is called Restful, not Bottleneck (it was Bottleneck in Frenchie). But these are tiny differences. Many of the director’s mises en scène are identical and many of the lines too (good old DD Beauchamp the Great wrote this one but both versions were very loosely based on the (very free) Felix Jackson adaptation of the Max Brand story.
.

No whittling, only knots
.
Perhaps just because it was a remake, the whole thing is pleasant but it lacks punch. 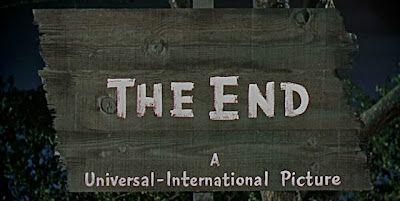 Till the next remake

PrevPreviousGunsights by Elmore Leonard
NextIt Can be Done, Amigo (Atlantida, 1972)Next

PrevPreviousGunsights by Elmore Leonard
NextIt Can be Done, Amigo (Atlantida, 1972)Next
Jeff Arnold © 2022 – All rights reserved – Designed by BetterCallChris
Scroll Up