In 1969, the excellent Glenn Ford, though his Western glory days were really behind him, made two more oaters, the saccharine Disney effort Smith! and the much grittier and classier Heaven With a Gun.

In Heaven With a Gun Glenn is Jim Killian, newly arrived in the New Mexico town of Vinegaroon. Now vinegaroons are not pleasant really. I wouldn’t want to share my bed with one anyway. And the town is no paradise either. Whether it’s the same Vinegaroon as Judge Roy Bean’s I’m not sure. In any case, local cattlemen there suspect that Jim Killian is a tough gunman in the pay of the sheep herders they loathe. Well, fair enough: Ford did have a history as a Sheepman.

But in fact he turns out to be Pastor Jim, a preacher with a gun, who sets up the Church of the Good Shepherd – not exactly a name to appeal to the cattlemen. Despite this, he seeks to bring cattlemen and sheepmen together in a world where the steer shall lie down with the lamb.

A Hopi Indian sheepman is hanged and the new pastor cuts him down and buries him. The Indian’s daughter, Leloopa, thinks she now therefore ‘belongs to’ the Pastor.

Leloopa is played by Barbara Hershey (of Portrait of a Lady and The Last Temptation of Christ fame); it was her first Western (she was competent in the later The Last Hard Men and Last of the Dogmen). She does quite well in this part too but she does remind me a bit of Katharine Ross in Tell Them Willie Boy is Here, also 1969. Having very black hair and a heavy suntan doesn’t really make her an Indian. She is too Hollywood-looking and struggles with the lines as a Hopi who has learned English from her mother. 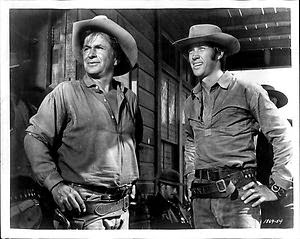 The great Noah Beery Jr. as ranch foreman and
a Carradine, David of that Ilk, as ne’er-do-well rancher’s son

Ms Hershey’s life-partner (for a time) was David Carradine, who in Heaven with a Gun plays Coke Beck, son of unscrupulous local cattleman Asa. Member of a distinguished Western dynasty, David is remembered by many people from Kung Fu but I prefer to think of him in terms of Young Billy Young, Mr Horn, Last Stand at Saber River and in particular, as Cole Younger in The Long Riders. In Heaven with a Gun he is a classic ne’er-do-well spoilt-brat son of a rich rancher and he is a murderer, rapist and a bad card player. Coke brutally assaults Leloopa in a barn. Westerns liked rich ranchers who had built up their empires from nothing with blood and sweat and then have ne’er-do-well sons. 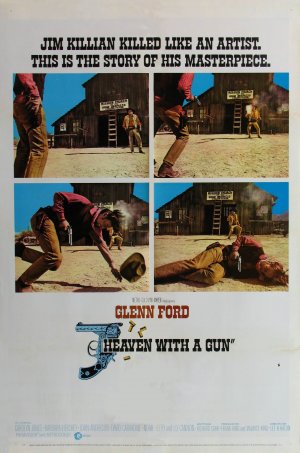 Coke’s cattle baron dad Asa Beck is played by John Anderson (who had been in every TV Western show you care to name, was Elder Hammond in Ride the High Country and Ezra/Isaac Maple in Welcome to Hard Times). He is very good in a John Dehner sort of way. It’s the sort of part that would have been taken by John McIntire à l’époque. He has power and charisma.

When a brutalized sheepman gets his revenge on Coke, Asa Beck blames Killian. He sends his hired gun, Mace (JD Cannon) to murder the pastor, and his ranch hands have orders to burn down the church. The former gunslinger preacher shoots it out with Mace in the saloon (classic stuff) and then his first reaction is to go after rancher Asa. But how will it pan out?

So we are in cattlemen/sheepherder territory, ground that has been well trodden (or ridden over) in Westerns, many times, in fact. The pastor with a gun is also a well-known Western trope. Think of Robert Mitchum in 5 Card Stud, for example. The man of peace is finally driven by wickedness to take on the bad guys…
So we haven’t got much original or new here. Writer Richard Carr had done mostly TV stuff up to then and the same went for director Lee H Katzin from TV shows Branded, Hondo and so on. This was his first feature Western. Still, the ending is a bit unusual and the writing is of a high quality. I also like the way that it is revealed that the preacher had been a gunslinger and had spent time in Yuma. So Glenn Ford did get to prison at the end of 3:10 to Yuma after all.

It is nice to see Noah Beery (Jr, obviously) still on the ranch after all these years. He is now the Becks’ ramrod. He was always good. I must do a Beery-careery retrospective one day (although it might take some time as he was in 70 Westerns).

Carolyn Jones (Linda in Last Train from Gun Hill ) is also rather good as the saloon Madam, Madge, who was the preacher’s squeeze in a former life – and she still loves him truly with a love that is doomed. 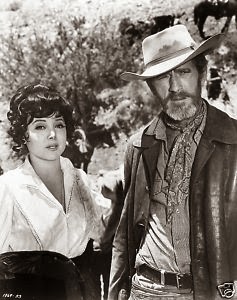 Glenn, 53, is still pretty active. Though with a touch of middle-age-spread, in his famous Jaxonbilt hat and jeans-jacket he looks just the same as always. Later in the movie he dons a rather elegant black preacher’s frock coat. His relationship with Leloopa is subtly done but when the time comes for action, he’s good at that too.
I will say that though slightly formulaic and predictable, Heaven with a Gun is a proper Western. It’s ten times better than Smith!, for example, and by no means the worst of Glenn Ford’s movies.
But it ain’t 3:10 or Jubal either. Fair enough. It was the 1960s.