.
.
Dan Duryea as McCart(h)y
.
.
Immediately after the lively 1954 Universal picture Rails into Laramie, 50s beefcake star John Payne got back together with well-known villain Dan Duryea in another Western, this time for RKO, Silver Lode.
Despite being directed by the most prolific of old pros, Allan Dwan (no fewer than 171 Westerns, from Bud Nevins, Bad Man in 1911 to The Restless Breed in 1957), it wasn’t a patch on Rails.
.
. 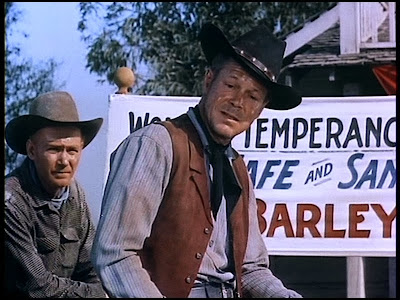 Villain Dan with henchman Dobe
.
The main reason is that it is very static, studio-bound and shot almost exclusively in interiors. It’s really a Western play. That would have been OK (after all, great Westerns like The Ox-Bow Incident and High Noon were like this) but the writing has to be very good in such a case. Silver Lode’s script is plodding and contains quite a bit of “It’s just a flesh wound” writing. There is some exterior action towards the end, in a very vaguely High Noonish way, as the lone hero, deserted or even hunted by the townsfolk, battles the bad guys on his own. But most of the film is people talking.
It was quite worthy. Writer Karen DeWolf tried for a McCarthyite commentary as the whole town gangs up on Dan Ballard (Payne), the guy they had previously admired and taken to their collective bosom. They believe a man purporting to be a US marshal – who is even called McCarty – when he claims that Ballard has shot someone in the back and run off with twenty thousand dollars that didn’t belong to him. Even Ballard’s fiancée Rose (Lizabeth Scott – only this and the Alan Ladd Western Red Mountain) wavers a bit, though more or less stands by her man. More loyal is the saloon gal whom Ballard has spurned for the fragrant Rose, Dolly (Dolores Moran, in her only Western; she married producer Benedict Bogeaus after the film). She stands for no nonsense from the sniveling Good People of the town. All the rest of the folk, even the ones who support Ballard at first, gradually slip away and join the mob mentality.
.
. 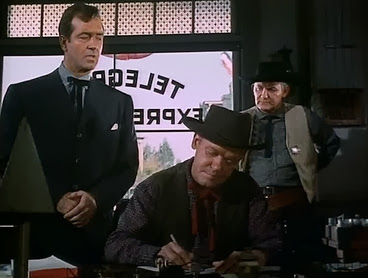 Payne and Meyer oversee sending of telegram by Bob Hope lookalike
.
Often in Westerns heroes are accused of base deeds but they consider it unmanly to justify themselves or speak out in self-defense, so they nearly get lynched, shot, run outa town, etc. If only they would just EXPLAIN. But no, that’s not the Western way.
Silver Lode is just the name of the town, by the way. There’s no silver in the plot.
.
. 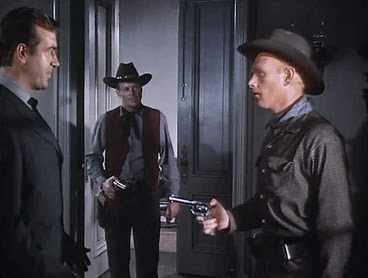 Dobe seems to have the drop on Payne, but here comes Dan
.
The best thing about the movie is the bad guy McCarty, for it is Dan Duryea, and better still, as he had in Rails into Laramie, he reined himself in somewhat. He doesn’t chew the scenery. So he comes across as quite mean and threatening and not just a joke. He frightens children in the first scene so is obviously bad. He has come to town (on the Fourth of July) with papers showing him to be a US marshal with a warrant for Ballard’s arrest. Well, town Sheriff Emile Meyer and Judge Robert Warwick have to go along, don’t they, even if they like Ballard. I mean, the law’s the law.
One of Duryea’s heavies is Harry Carey Jr, who is OK, but the others are bland to the point of invisibility. Payne is solid and competent, but he was never really charismatic. The dumb telegrapher (Frank Sully) looks just like Bob Hope.
.
. 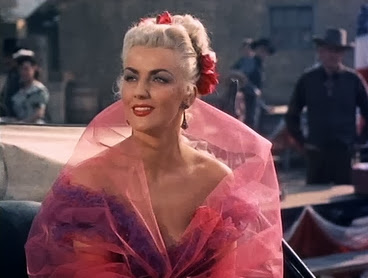 Saloon gal Dolores stands by her ex
.
The John Alton color photography is quite good. Windows are used a lot and the single-shot take as the hero runs along streets looking for a place to hide with the camera alongside is pretty classy.
There’s a Vertigoish bell tower and a cheesy, sentimental, mysterious-ways religious ending. Ballard then tears the townsfolk off a strip for their pusillanimity in not siding with him but there’s isn’t a star-in-the-dust moment and we don’t know if he stays or not.
.
. 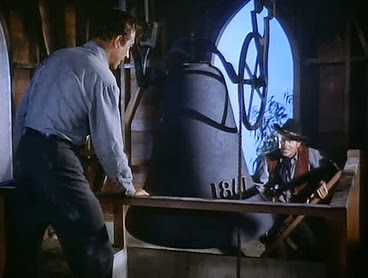 Eat your heart out, Hitchcock
.
Martin Scorsese spoke up for the film and Peter Bogdanovich was a Dwan-fan, so it has gained something of a cult following but it isn’t really very good, I fear. It’s alright, but au fond it’s a mid-budget oater with a rather heavy-handed message. Even if it’s a good message.