Formulaic but not at all bad
.

I was always rather a Dana fan. Mr Andrews was in 14 Westerns and was usually quite good, in a reserved, Joel McCrea-ish way. After being third-billed in a Cisco Kid movie in 1940 he was third again as Capt. Frémont in the fun farrago Kit Carson. He had a small part on the wonderful William Wyler-directed The Westerner, and he was third-billed yet again in the Randolph Scott/Gene Tierney movie Belle Starr. He was one of the innocents hanged in The Ox-Bow Incident in ’43, then came probably his finest hour as the star of the excellent Canyon Passage, directed by Jacques Tourneur in 1946. I also thought he was good in Smoke Signal. Comanche was his tenth oater. He plays a resourceful and wise scout who wants to make peace with the Comanche. It is one of those many 1950s sub-Broken Arrow quite pro-Indian Westerns.
.
. 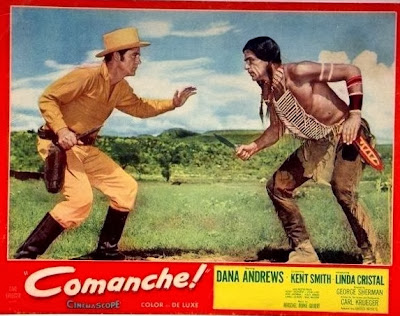 OK, Henry, freeze for the still.
Not moving a muscle, Dana.
.
His old-timer semi-humorous sidekick is Nestor Paiva. Nestor’s parents were Portuguese immigrants and he was wheeled on to play any kind of ethnic part, whatever was needed. He was in 56 Westerns and any number of TV shows but I remember him as Curley in the excellent Ramrod and Pete Maxwell in The Left-Handed Gun. In Comanche he is a scruffy, buckskin-clad scout called Puffer. His children are in it too, as ‘Young girl killed by Indians’ and ‘Young boy killed by Indians’. Well, you have to start somewhere. There’s a film-long bit of ‘business’ with a wig that Dana buys him to cover his bald pate, which the Comanches fear as a removable scalp. The part could easily have been taken by Walter Brennan or Gabby Hayes but Nestor does a good job.
.
. 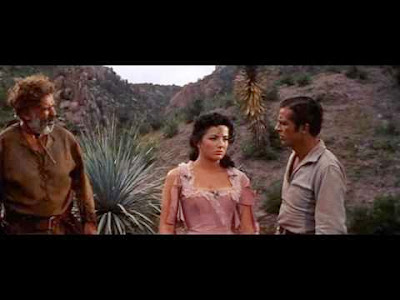 Nestor, Linda, Dana
.
It’s a nice picture visually, filmed in Durango (muchas gracias in the credits to the Mexican government, you know how they do) and there are loads of sweeping vistas and a huge cast of extras. I don’t know where they got so many Comanches. Either they were paid very little each or UA had a blooming big budget. It was shot by Jorge Stahl Jr, who had done the photographically outstanding Garden of Evil, also shot in Mexico, with Gary Cooper and Richard Widmark.
It’s a formulaic plot of noble scout, skullduggery from a scalphunter (Stacy Harris, the eye-patched henchman in The Great Sioux Uprising), a politician who, surprise, surprise, is bigoted, conniving and foolish all at the same time (Lowell Gilmore), a statesmanlike mighty Indian chief, Quanah Parker (Kent Smith, in his first Western) as counterpart to Dana, and the obligatory hothead Indian who’s all for war, Black Cloud – Henry Brandon. Brandon was a Berlin-born American who specialized in Indians, maybe because of his slightly angular face. He was most famously Scar for John Ford in The Searchers earlier the same year and was promoted from Black Cloud to Quanah Parker for Ford in Two Rode Together for Ford again in ’61.
.
. 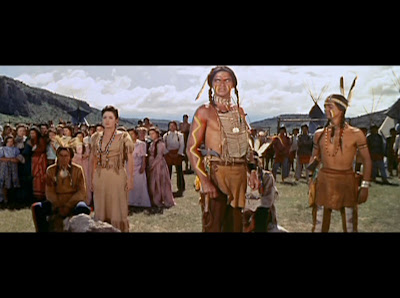 Henry Brandon as angry hothead Black Cloud
.
We also have an appearance from General Nelson A Miles, this time impersonated by John Litel. Litel used to pop up in all those Michael Curtiz/Errol Flynn Westerns like Dodge City, Virginia City and Santa Fe Trail. General Miles was quite a regular in Indian Westerns over the years. Stephen Chase, Stafford Morgan, George Kennedy, Kevin Tighe, Shaun Johnston and John Huston have all played him. Actually Kent Smith, this film’s Quanah, changed sides and played him twice.
.
. 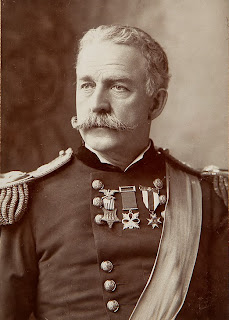 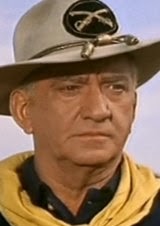 John Litel as Miles. What, no mustache?

Massachusetts-born Miles entered the Union Army in the Civil War aged 22 in 1861 as a volunteer and was a full colonel by 1862. He was a much-wounded hero of Antietam, Fredericksburg and Chancellorsville, received the Medal of Honor for gallantry at Chancellorsville and finished the war a major-general. After the war he was appointed a colonel in the regular Army, married Sherman’s niece and played a leading role in nearly all of the Army’s campaigns against the American Indian tribes of the Great Plains. He was a shrewd political operator. In 1874-1875, he was a field commander in the force that defeated the Kiowa, Comanche, and the Southern Cheyenne along the Red River. Later he replaced Crook as Army commander in the fight against Geronimo. By 1890 he was Brigadier-General Miles again and was commander at the time of the massacre at Wounded Knee, though not directly involved and critical of the commanding officer there. He was Commanding General of the United States Army at the time of the Spanish-American War and personally led the invasion of Puerto Rico. Aged 77, he offered to serve in the First World War but his offer was declined. He died in 1925. It was quite a career.

There has to be a beautiful dame, of course, and it’s the American debut of ‘Miss Linda Cristal’, as she is billed (unusually, only billed tenth). She was to appear in such epic Westerns as The Last of the Fast Guns and The Fiend Who Walked the West. Her high point was as Elena in Two Rode Together. She was very beautiful and being Argentinian spoke English with a lovely Spanish accent. She and Dana fall in love, natch.

There’s a title song with the chorus ‘A man is as good as his word/As good as his word is he/If a man is as good as his word/He’s good enough for me’. This has a catchy tune and theater audiences would have enjoyed it if they had been tone-deaf morons.
The trouble is that this ditty is endlessly repeated, with even more banal words, and if that weren’t bad enough, the score does orchestral variations on this drivel till you are close to screaming. The music (Herschel Burke Gilbert) is intrusive and distracting. It’s a real no-no.

Some of the writing is rather good, though. The first scene, when a storekeeper sells a doll to a smiling mother with the recommendation that the doll’s hair is made from real Comanche scalps (the mother benignly gives the doll to her little girl) is particularly effective. Elsewhere, there is some attempt to stick to historical fact. Of course a lot of it is bunkum, as you know it will be when you see on the opening screen, ‘Most of the characters, places, dates and events in this story are factual’. That “most of” lets them off the hook, I guess. But they do try. It was writer Carl Krueger’s only Western and he didn’t do a bad job at all.
.
.

“Most of…”
.
It’s supposed to be 1878 but by then Quanah (unknown birth date, died 1911) was no mighty warring chief. He had surrendered in 1875 and with Colonel Mackenzie and Indian Agent James M Hayworth, he helped settle the Comanche on the Kiowa-Comanche-Apache Reservation in southwestern Indian Territory. It’s a very interesting story.

There’s the curious statement by Quanah that the Comanches are not fighting against Americans. “The Comanches are at war only with Mexicans.” At the end, when Black Cloud has shot his bolt and peace is made, Dana sonorously pronounces to the Comanche, “My country has pledged its word that our treaty will never be broken by a white.” We all know how that went.

Comanche will not set the prairie on fire but is quite an enjoyable Western, and the performances of Dana Andrews and Nestor Paiva lift it.  Just turn the sound down when the song comes on.
.
PrevPreviousGone to Texas and The Vengeance Trail of Josey Wales by Forrest Carter
NextThe Tall Stranger (AA, 1957)Next

PrevPreviousGone to Texas and The Vengeance Trail of Josey Wales by Forrest Carter
NextThe Tall Stranger (AA, 1957)Next
Jeff Arnold © 2022 – All rights reserved – Designed by BetterCallChris
Scroll Up