The Shootist by Glendon Swarthout

.
.
A landmark Western novel
.
.
The term shootist was, I believe, a jocular one coined by gunman Clay Allison to describe his ‘profession’ by analogy with an artist. Really, in that case, he should perhaps have called himself a gunist or a deathist. Anyway, the jocular part seems to have been missed and the term passed, towards the end of the nineteenth century, into common use, along with assassin, gun man (or gun-man or gunman) and man killer, although not gunfighter or gunslinger, which were later (especially Hollywood) coinings. Webster’s says that the first use of gunslinger was by Zane Grey in his novel Nevada of 1928.
Another of the ‘landmark’ Western novels, one of the key examples of the genre, which anyone interested in Westerns would enjoy reading, was published in 1975 (my copy Signet, New York, 1986) and almost immediately became John Wayne’s last movie. It was The Shootist (originally The Last Shootist) by Glendon Swarthout.
.
. 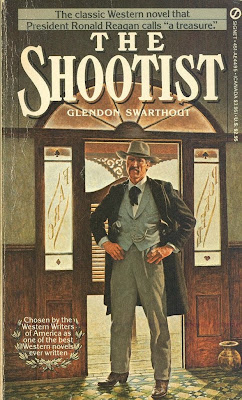 Cover picture very accurate portrayal of the book’s Books
.
Glendon Swarthout (1918 – 1992) was a Michigan-born writer who published 16 novels between 1943 and, posthumously, 1994 in a wide variety of genres. Some were Westerns and three in particular have been made into fine films, the Gary Cooper picture They Came to Cordura (Columbia, 1959); The Shootist (Paramount, 1976) with John Wayne, James Stewart and Lauren Bacall; and, latterly, The Homesman (perhaps Swarthout’s finest Western novel), a Tommy Lee Jones picture of 2014. The 1956 Randolph Scott oater 7th Cavalry was also based on a Swarthout story.
.
. 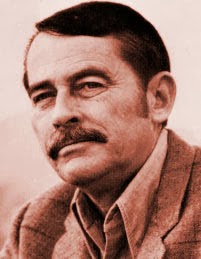 .
I love John Wayne in The Shootist. It was one of Duke’s finest films, certainly Don Siegel’s best, and James Stewart and Lauren Bacall give incomparable support. It is poignant and thoughtful and it encapsulates perfectly that whole ‘end of the West’ theme, yet at the same time it is a classic ‘showdown’ Western in the great tradition.
But the book, which I read after first seeing the film, is very different.
It is not so different in terms of plot or action (although even there significant changes were made) so much as in tone. The novel is much tougher than the film and rather coarser. The language is earthier and you get the impression that the movie toned things down to get the right theatrical rating. The central character, gun-man JB Books, is more violent than John Wayne’s portrayal, and more dangerous. He shoots one attacker in the rectum and another, who says he is leaving and does not want to fight any more, in the back. The killings are described in forensic detail and very brutal they are. This is not Duke’s way.

The whole approach is deliberately dime-novelish, and it seems to suit a pulp paperback, though in fact it is well written, unlike most dime novels, and characters are subtly limned.

You probably know the story: Books, 51, comes to El Paso to consult a Doctor Hostetler who saved his life before, and is diagnosed with advanced prostate cancer. He installs himself in a boarding house run by a widow, Bond Rogers. Mrs Rogers’s son, 17-year-old Gillom, is wild and unruly and is hugely impressed by the notoriety of Books. Rather than die slowly in agony, Books decides to go out in a blaze of gunfire.
Ron Howard, then 21, who had appeared as a young man in various Westerns, such as The Spikes Gang, and who has since become a noted director and producer (The Missing, Cowboys and Aliens) played Gillom as a star-struck boy. He is feisty but basically decent. The book’s Gillom is far less pleasant. He is a wastrel who has abandoned school in favor of hanging out on Utah Street and consorting with a bad crowd. He steals (even the money Books finally leaves for the boy’s mother) and is prepared to kill. This is really a key difference between the book and the movie. In a way, the ending of the film has been so radically altered from that of the novel that it almost changes everything. But I won’t reveal those endings in case you haven’t seen the film and/or read the book!
Some changes the movie made were improvements. Replacing the exotropic villain Serrano (a sort of Mexican Jack Elam) with Richard Boone as Sweeney was masterly, and having him turn up at the saloon for the showdown in an automobile, symbol of the new age, was also an excellent move. Changing the locale from El Paso (it is a very El Paso-specific novel) to Carson City, Nevada was probably a good idea because of Carson’s picturesque 1901 appearance. Having Books go to the different tradesmen (undertaker, barber, livery man and so on) rather than their coming to him at the boarding house, as in the book, gave more action to the movie and more settings. In the novel Books is far sicker than in the film and could not have walked so far.
.
. 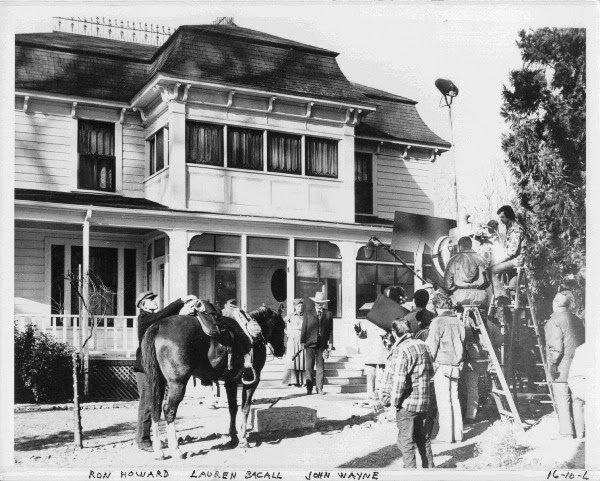 Film set in Carson City, Nevada. Ron Howard as Gillom, Lauren Bacall as Bond Rogers and John Wayne as JB Books.
.
Books buys a newspaper on the day of his arrival in El Paso (it reports the death of Queen Victoria) and decides to read it, for once, from cover to cover. It will be his last. The little articles lifted from it that punctuate the narrative of the book establish the period perfectly and enhance the end-of-the-West theme.
On page 48, the journalist Dobkins avers that Books is “the most celebrated shootist extant.”
“Extant?”
“Still existing. Alive.”
“I see.”
“All the others are gone, I’m sorry to say – Hickok, Masterson, the Earps, Bill Tilghman, Ringo, Hardin, Doc Holliday, Sam Bass, Rowdy Joe Lowe, all the great names.”
“That’s true.”
“The end of an era, the sunset you might say. You’re the sole survivor, Mr. Books.”
This is a little odd as we are in 1901 and Virgil Earp died in 1905, Wyatt in 1929, Bat Masterson in 1921 and Tilghman in 1924. But I suppose these elderly ex-shootists weren’t practicing their erstwhile profession in 1901.
Well, it’s a fine book. And sometimes it’s good to have rather different film versions of Western novels. And I do think that the movie stays loyal to the spirit of the book. One of the two writers of the film’s screenplay was Swarthout’s son Miles, has written:
The Shootist flashed into Glendon Swarthout’s imagination early one Arizona evening in 1973 while shaving before going out in Scottsdale, their hometown. My dad told my mother, Kathryn, “Hold on, I just had a terrific idea. We’re gonna be a little late for the party.” He then sat down at his desk and in about forty-five minutes outlined the basic story of what would become two years later, one of his best-known novels and certainly the best film ever made from one of them.
A must-read, e-pards!
.
PrevPreviousPosse from Hell (Universal, 1961)
NextThe Command (Warner Bros, 1954)Next