.
.
A real Western
.
.
Some dispute that Cuba Libre is a peoper Western, which I understand because it’s really an historical novel set during the 1898 Spanish-American War, but to me it really is a Western, Elmore Leonard’s last. Leonard himself called it “a tropical Western” and that’s what it is. It reminds me of Quigley Down Under: it may be set out of the traditional American West and the hero may be somewhat out of his true element but it’s as Western in theme and tone as you can get.
And it’s a cracking good novel.
.
. 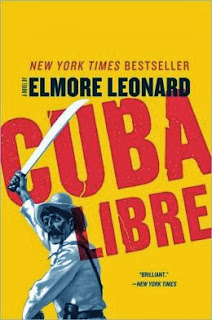 Cracking yarn
.
Elmore liked continuity and recycling his people and places, and our hero this time, cowboy and ex-Yuma detainee Ben Tyler, comes from Sweetmary, Arizona Territory, the setting of Gunsights (1979). Dana Moon and others are mentioned, though not, surprisingly perhaps, Bo Catlett, the hero of the later short story “Hurrah for Captain Early!” Bo had served with distinction in the Cuban war and we might have expected to meet him in Cuba Libre, but nay.
Still, we are introduced to Virgil Webster, a US Marine blown off the USS Maine into Havana harbor, and his lawman son Carl appears in the non-Western The Hot Kid (2006). Virgil himself pops up again briefly in Up In Honey’s Room (2007). I like meeting up with these people in other books. It’s fun.
.
. 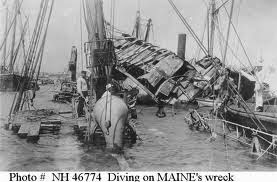 Accident or sabotage?
.
We have all the proper ingredients, a sleazebag American sugar magnate, his pretty mistress for our hero to woo away from said sleazebag, a sadistic Guardia Civil major with assorted thuggish henchmen, sundry noble and less noble Cuban freedom fighters, loyal and amusing sidekicks, they’re all there. The “dons” are the baddies alright, though there are no pretensions as to the saintly nobility of American motives or the impartiality of the American press
.
. 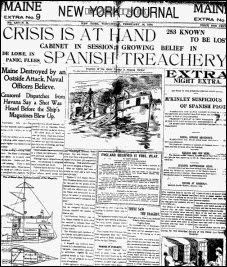 A war whipped up by the press
.
There are prison escapes, shootings, horse chases, train hold-ups, bar fights, everything a proper Western needs. The bar at the Hotel Inglaterra in Havana must be getting to used to disposing of corpses.
It’s a long book, which is nice, not one of those short-and-sweet Elmore paperbacks that are over before the afternoon is out, leaving you on a sugar-high having to start another one.
The prose style is not the punchy rapid-fire Get Shorty English of his crime novels; after all, it’s a discursive 19th century tale. But it’s still recognizably Leonard. Very little purple prose, loads of extended present-participle-heavy sentences, action advanced through dialogue, and so on. We don’t get bogged down by descriptions of weather. Reported speech is usually done simply with said. Good stuff.
.
. 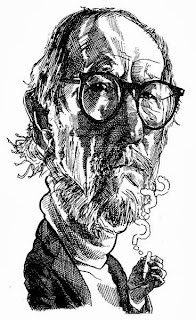 Elmore Leonard by Jerry Waghorn
.
Very rarely Leonard slips into that historical novel error of giving us a history lesson. Towards the end, for example, Chicago Times reporter Neely (also from Gunsights) bores the sugar magnate with his historical commentary of the military action, and he bores us, the readers, too. But that’s a very rare blooper. Most of the time the facts are worn very lightly and only introduced where the action needs them.
Cuba Libre is actually one of my favorite Leonard Westerns, much as I like the others. 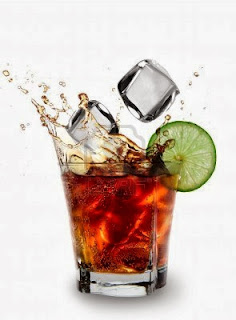