.
.
Watchable, but…
.
.
Wartime, and Paramount made a big black & white Western called American Empire with loads of shooting and riding, a Mississippi steamer and some romance too. Unfortunately they chose Richard Dix, pushing 50, and Preston Foster, early 40s, to star; neither was a convincing Westerner, both being distinctly unathletic. Foster had had minor roles in a few lesser Westerns while Dix, a great athlete in his youth, had been Wyatt Earp in Tombstone: The Town Too Tough To Die earlier the same year and in a huge number of silents and talkies in the 20s and 30s, so their names were well known. But neither cut it as a cowboy, at least in this film. 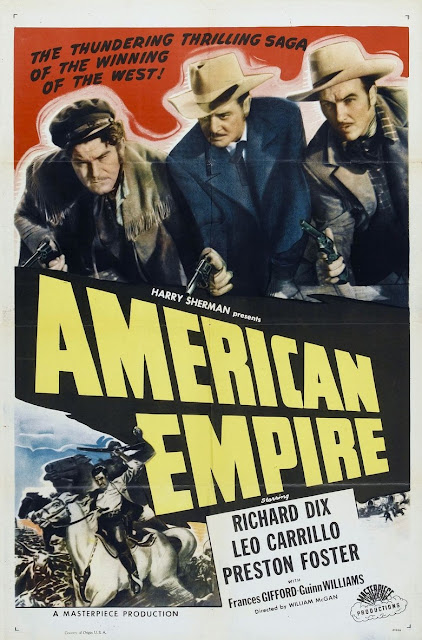 .
It’s a good-partner/bad-partner yarn as Preston Foster (the bad one) convinces Dix to sell their paddle-wheel steamer, the Betsy Ann, and go into the cattle business. Under Foster’s ruthless control the ranch grows huge and they become wealthy. Foster marries Dix’s sis, Frances Gifford, and they have a little boy, Merrill Rodin.
But Foster becomes arrogant and greedy and refuses to let neighboring ranchers cross his land. They cross anyway and the little boy is thrown from his pony under the hooves of stampeding cattle and killed. Now it’s war.
There is a dashing French rustler called Dominique Beauchard (Leo Carrillo, the Cisco Kid, who got second billing). The judge is William Farnum, Dustin’s brother, the great silent star; his first Western was The Spoilers in 1914 and he made 63, his last in 1952. When he died, Carillo was one of his pallbearers.
Guinn ‘Big Boy’ Williams as Sailaway and Cliff Edwards as Runty are the squabbling crewmen-become-cowboys. Edwards gets to sing a forgettable song, ‘Little Pal’, to the kid. Luckily, it’s soon over. They provide some slapstick. Chris Pin Martin is a henchman of the rustler chief, so that’s good.
.
. 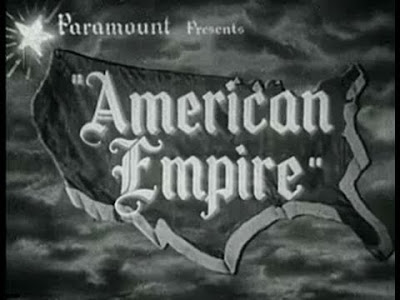 Title screen
.
It all ends with a huge climactic gun battle with ranchers against rustlers. There are Jerry Lee Lewis-esque great balls of fire as the ranchers light hay bales and roll them down on the rustlers. They have revolvers that never need reloading and always hit what they aim at, even in the dark at 200 paces.
The music (Gerard Carbonara) is desperately old-fashioned. Some of the black & white photography is good, especially the flaming pass. It’s by Russell Harlan, Paramount’s Western specialist. His greatest triumph came six years later in Red River.
.
. 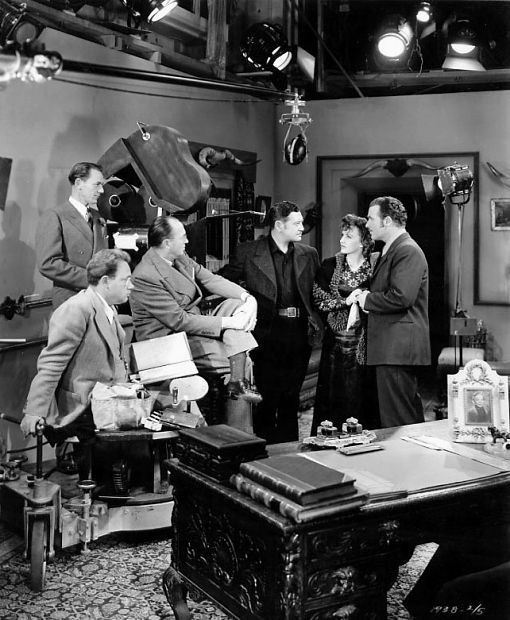 Interesting shot of the set with Russell Harlan (left, at camera), stars Dix, Gifford and Foster on the right, director McGann on Dix’s right, and an unknown bod between Harlan and McGann.

The writing of American Empire, by J Robert Glen and Gladys Atwater from their own short story, is pretty two-dimensional and contains various patriotic statements appropriate for 1942. Interestingly, it was called Far West in Europe; perhaps that was diplomatically less imperialistic.

The director was William McGann, who had chosen Dix in Tombstone… and American Empire was one of his last films.
It’s like a big B-movie really, though the gun battle is pretty dramatic. It’s formulaic and far from great art, but it is a rollicking actioner. You’ll see worse, yes, but you’ll also see a lot better. It all looks pretty dated.