.
.
Lovey-dovey kept to a minimum
.
.
This is a juvenile singin’ cowboy Western for wartime audiences. It stars Tex Ritter, who had a decentish voice but as an actor, he made a great singer. Still, this is one of the slightly higher quality Tex pictures and in it he is supported by Fuzzy Knight for comic relief, Jennifer Holt for the love interest (“A lady bandit?” says Fuzzy. “What will they think of next?”) and Johnny Bond and his Red River Valley Boys (never less than superb) to sing in the Last Chance saloon and back Tex up on the range when needed.

Tex is a US Army lieutenant who is sent (aided by Corporal Fuzzy armed with his banjo) on a secret mission to Oklahoma where bandits are preventing horses getting to the army as remounts and thus hindering the war effort. The bandits are led by El Vengador – Jennifer, all in black, a kind of would-be Joan Crawford in Johnny Guitar but without the command of Barbara Stanwyck in Forty Guns or the sex appeal of Jane Russell in Son of Paleface but a bit more plausible than all three. Her sidekick and soon Tex’s rival is Dennis Moore. Luckily Tex is able to convince Dennis of his patriotic duty and they become allies. This is a wartime Western for boys, after all. And for the same reason the lovey-dovey is kept to a minimum. No smooching on the job when there’s Hitler to be defeated, boys. Actually, given the average age of the audience, probably there wasn’t that much interest in lovey-dovey in the first place. 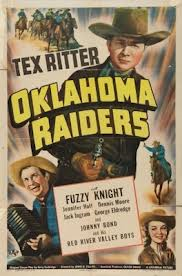 There are some evil town bosses led by Jack Ingram who are trying to do down the honest ranchers. Ha! Tex soon deals with them.

There are some pretty dire lines which doubtless appealed to the audiences, for example, Fuzzy replying to Tex who tells him on the level about the bandits’ lair. “On the level? I thought it was in the hills.” The screenplay was by Betty Burbridge, so blame Betty.

Many of Tex’s Westerns were named for states, such as The Utah Trail, Down the Wyoming Trail, Oklahoma Raiders, Trouble in Texas, Arizona Days qnd so on.

In this one there are loads of horses to be driven. This was no ultra-low budget cheapie. The Paul Sawtell music is chirpy. The creases in Tex’s pants never fade. Fuzzy has an elixir made from a magic formula which, when he overdoes it, explodes. This comes in very handy when being pursued by the baddies and the bottles are perfect hand grenades. The Red River Valley Boys sing and play their instruments as they ride along. At the end, the remounts are delivered, the war won and they all live happily ever after. Except, Hitler, natch.

You could watch it, I suppose.
.
PrevPreviousTrouble in Texas (Grand National, 1937)
NextMy Little Chickadee (Universal, 1940)Next