The first movie adaptation of Jack Schaefer’s 1963 novel Monte Walsh (click the link for our review of the book) was made seven years later and starred a magnificent Lee Marvin in the title role, backed by an equally fine Jack Palance as Chet Rollins. 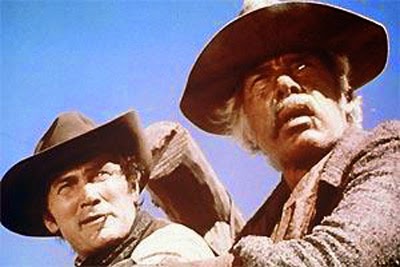 .
It was directed, interestingly, by William A Fraker. Fraker had been a member of the American Society of Cinematographers (ASC) since 1968 and had photographed The Professionals and Paint Your Wagon (both also with Marvin). To give you an idea of the lengths he would go to get a good shot, when filming Bullitt (a Western deep in its heart) he had himself strapped to the hood of Steve McQueen’s Shelby Mustang so he could have his camera (and you, the viewer) drive thru San Francisco at 100 mph +. As a director, he was essentially a visual director and indeed, one of the great merits of the 1970 Monte Walsh is the look of it. The lovely Arizona locations (Patagonia, Mescal and Old Tucson) are often photographed in long-shadowed evening or early-morning light. The picture looks like an elegy even before you get into the story. The opening titles are done over some nice drawings and there is something Remingtonesque about the whole. Remington, like Schaefer, managed to get soft-yet-hard artistry without sentiment into his portrayal of the West. The DP on this Monte Walsh was David M Walsh, Monte’s cousin maybe, who had worked on The Hallelujah Trail and Paint Your Wagon (both iffy movies but visually fine).
.
. 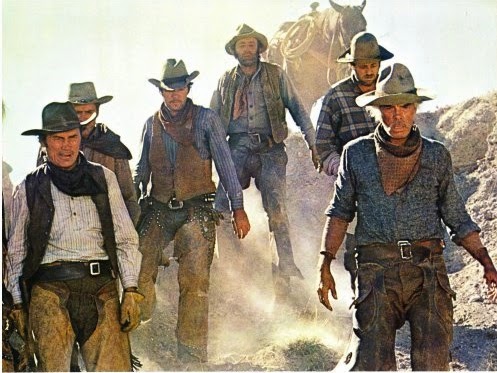 .
It can’t have been easy to transfer such a long, episodic if not rambling tale to the screen. In the 450+-page book, Monte is first introduced as a fifteen-year-old boy and dies a battered, worn-out cowpoke of 57 in 1913. In between he has a long series of adventures and escapades and rides many trails. So an adapter must select. Screenplay-writers David Zelag Goodman and Lukas Heller had the task of squeezing Schaefer’s novel into 106 minutes of runtime and clearly they had to pick a representative sample. They chose to cover the Slash Y years only and have Monte ride off at the end into further adventures. Fair enough. Goodman is best known for The Untouchables and Straw Dogs and this was his only
Western; Heller is best known for The Dirty Dozen and had only worked on one other Western, the trashy The Deadly Trackers starring Richard Harris and co-written with trash-expert Samuel Fuller. Still, they did cope with Monte Walsh quite well.
Only, when you have such a full novel, crammed with events, why do you need to add new scenes? The ‘Fighting Joe Hooker’ episode is quite good but what is it doing there? Why do you try to ‘improve’ the story? One thing I don’t really forgive Goodman, Heller and Fraker for is killing off Chet. In the movie Shorty holds up a hardware emporium (Chet has become a store clerk, not a successful businessman as in the book) and shoots him with a shotgun. I don’t really see what was gained here. Chet was the obverse of the Monte coin (probably a plugged nickel). You need Chet to set off Monte; they were inseparable in the story and each complemented the other. Kill one off and you are left with the other in the wind.
.
. 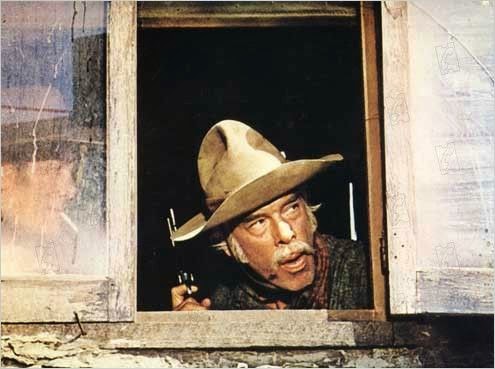 The changes were perpetuated in 2003 Tom Selleck remake (click here for our review of that one).

There are also some features which will annoy the Walshistas out there. Monte rides a black and Chet a leggy dun. Now that’s wrong. But on the other hand the costumes (Monte’s hat is to die for), props and sets are frankly superb. You can smell the real West.

Although the musical side is spoiled by an inappropriate late-60s pop song croaked by Mama Cass, which introduces and ends the picture, most of the original music, by John Barry, is very good – unusual, sometimes dark, moody and atmospheric. Some of it seems to have come from a gangster noir.
.
.
One interesting aspect is that this is a Western without villains. No one, not even Shorty, has bad intentions or is on the side of Evil. Only the nameless Eastern corporate interests are wrong ‘uns and they are 3000 miles away and never appear.
As for the acting, there are some nice lesser roles. In particular, Jim Davis made an excellent Cal Brennan. What a fine Western actor Davis could be. Mind, he was also in some junk. Most people, I suppose, think of him as Jock Ewing but in fact he was a trail-hardened cowboy who appeared in 220 Westerns if you include all those Stories of the Century episodes when as Matt Clark he was instrumental in the life (and often the demise) of every significant figure of Western history and myth there has ever been. But even in those silly shows he was good.
.
. 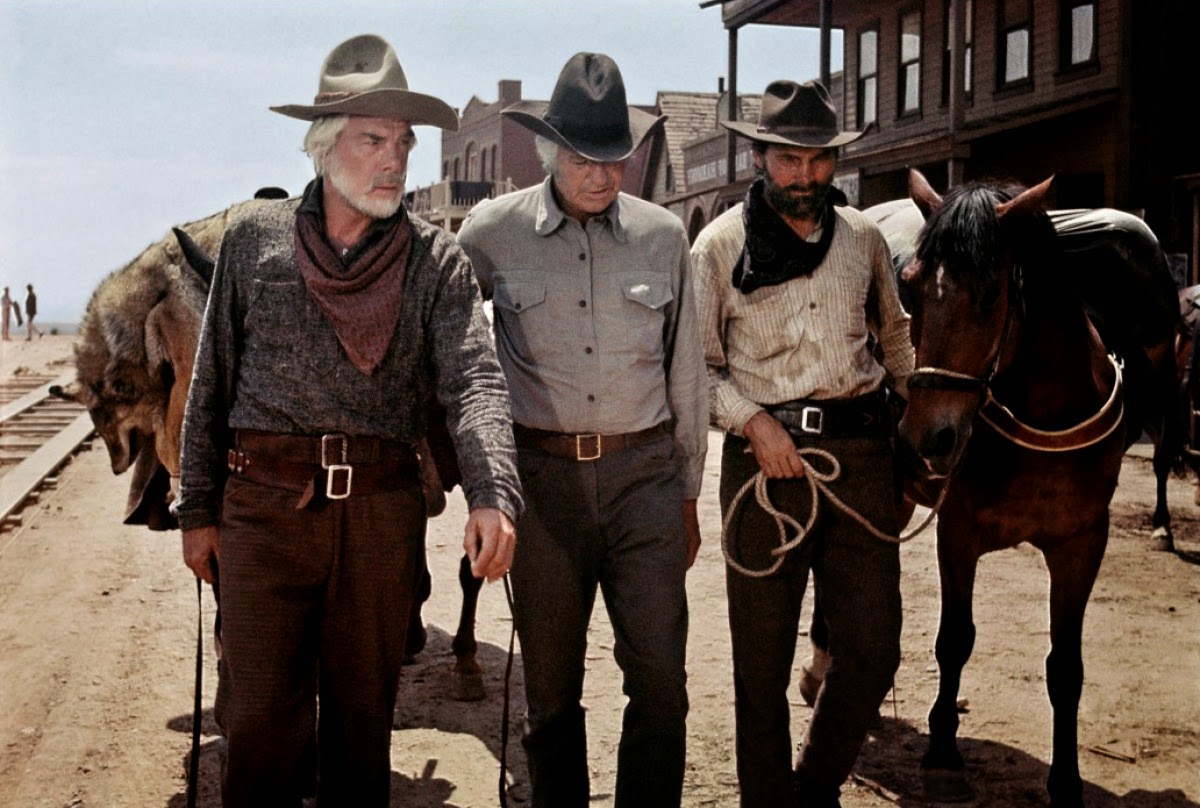 .
Perhaps as a homage to Jim, there’s an invented character Rufus played by Matt Clark. Clark pops up in many Westerns, including the similarly-themed Will Penny. Bo Hopkins is a good Jumpin’ Joe Joslin. Jeanne Moreau takes the part of the whore Hattie (named Martine in the movie) and does it very movingly, I thought. Mitch Ryan does a powerful Shorty Austin: rustler Shorty is dealt with summarily and quickly in the book but the movie builds up his part till he’s some famous desperado outlaw. Oh well.
But of course the acting is dominated by Marvin and Palance.
Marvin was such a good actor that he could make even a stodgy marathon like Paint Your Wagon seem lively. Depending on your definition of a Western, he was in 17 movies and some TV shows. He was most famously Liberty Valance, for John Ford, and very good too, but I think his best Western performance, despite those box-office comic roles in Paint Your Wagon and Cat Ballou, was as the charming villain in the 1956 Budd Boetticher/Randolph Scott oater Seven Men from Now. He was excellent, too, in The Professionals and The Spikes Gang. Here, he makes a perfectly splendid Monte Walsh. He has the right blend of grizzled, leather-tough trail-hand and sparkle in the eye. And what a hat! Had I been the director or screenplayist I might have played up the sparkle angle a little more, in the spirit of the book, but Lee Marvin delivers the lines he is given with nothing short of aplomb. Yup, aplomb.
.
. 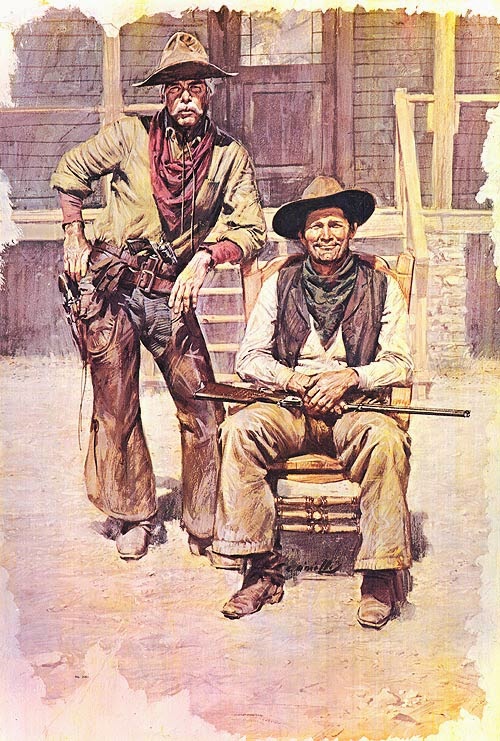 .
As for Jack, well, he is rather unusual in this film, playing the good guy and back-pedaling modestly to highlight Lee’s Monte (which he hadn’t had to do when they were together in The Professionals). He is a sympathetic and gentle Chet and, in my view, absolutely superb. It would have been a better film if they had kept him alive and had him present at Monte’s death. You see, Chet marries and settles down; he adapts to the new times. Monte does not and continues footloose and feckless. Yet it is Chet who is left with regret; Monte regrets nothing. For me, that is almost the message of Monte Walsh.
.
PrevPreviousMonte Walsh by Jack Schaefer
NextMonte Walsh (TNT, TV, 2003)Next