.
.
Tonto gets his own back
.
.
Now before discussing the überblockbuster of 2013 I feel I ought to declare an interest. The Lone Ranger and I go back.
Let me tell you a little story. I was born in the years after the end of the Second World War and was a little boy in the early 1950s. We did not have a TV. They were still quite rare and expensive and my parents didn’t have the inclination or money to get one. But one day – I must have been five – my siblings and I were invited to the apartment of a neighbor who had one of the new magic boxes and there great wonders were beheld. For you see my first ever TV program was a Western. I was entranced and have been in thrall ever since. It was an episode of The Lone Ranger. It was the most thrilling thing I had ever seen in all my five long years.
.
. 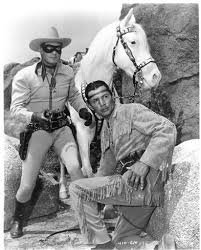 My heroes
.
However, the tale ends in a sort of tragedy because just as we got to the climax of the episode, when the Lone Ranger and Tonto in some rocks were surrounded by the bad guys and the Lone Ranger was down to one last, silver, bullet, and tension was at such a pitch of excitement that it was almost unbearable, just at that very moment, I say, my eldest and extremely bossy sister, 10, unilaterally decided that such broadcasts were too much for a child of my tender years and she lifted me bodily, depositing me outside the door. And I never did get to find out how the Lone Ranger and Tonto escaped (for they did). This trauma scarred me for life, I think (I must remember to ask a psychiatrist about it) and I have spent all my subsequent years on a quest to find out the inner truth of Westerns. For example, when I first visited that wonderful oasis of beauty, the Gene Autry Western Heritage Museum in LA, and they had various old TV Westerns available at the press of a button, I zoomed in on The Lone Ranger one – only to find it was a different episode, sigh. I have never found the grail. Perhaps that’s the way it should be. Who wants actually to arrive at the end of the rainbow? Maybe Dr Nussbaum is right.
Well, you, dear e-reader, will now understand what an important part The Lone Ranger has played in my life. He, in the shape of Clayton Moore, of course, and his sidekick, the great Jay Silverheels, accompanied me through childhood and adolescence down the trail into the adult state. Obviously I watched the movies they starred in, and others in which lesser actors weakly impersonated my heroes. The 1949 Enter the Lone Ranger was especially good as it gave the backstory, telling how the Texas Ranger first put on the mask when battling the evil Butch Cavendish (you could tell he was evil because he was armed with a derringer). Essential viewing.
You may therefore imagine with what breathless apprehension I greeted the news back in 2012 that a new Lone Ranger movie was to be made, starring Johnny Depp, no less, and it was to be a megabudget blockbuster which would make Pirates look tame (not that I have ever liked the Pirates movies). I live in the center of France, a wonderful land but a benighted one as far as some things go, and when, finally, the film came on in my local town, I was chagrined (that is the only word that will do) to find that they were only showing it dubbed into French. So I didn’t go. I don’t mind French films in French (though most French films are in fact dire) but not American ones and most certainly not Westerns. Inertia prevented me from catching The Lone Ranger in VO in Paris. So I never saw it at the movies. Yesterday, however, amazon delivered the DVD and I finally got to watch it.
.
. 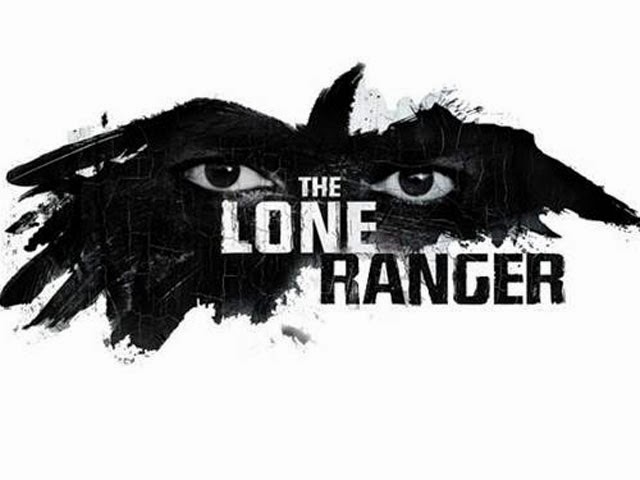 That was rather a long intro to a movie review, wasn’t it? Sorry.

The first thing you notice, because it is very in-your-face, is the Disney logo of that ghastly cutesy castle beloved of six year-old girls who wear pink but no one else in the universe. I am not one of those who believe that Disney is an evil power and a blight upon the land. The corporation is not solely responsible for the debasement and plastification of world culture. The world would not necessarily be a better place if the Disney conglomerate were to disappear from the face of the planet. Still, I am not sure they should be in charge of Westerns.
Anyway, where was I?
The movie is referential, if not reverential. It nods to very many famous films but to three famous Westerns in particular (as well as the Lone Ranger movies, radio and TV shows of old, of course). They are Little Big Man, Once Upon a Time in the West and Dead Man.

Little Big Man because early in the movie we get a Jack Crabb-like Tonto, old and wrinkled in a 1933 San Francisco, visited not this time by a geeky writer but by a small boy in cowboy outfit and mask whom the slightly addled Tonto takes to be Kemo Sabe. The film is thus a long flashback. And to reinforce the Little Big Man connection, Tonto tells the Ranger at one point that “it is a good day to die.”
OUATITW because of the slightly spaghetti music (once a reprise of the William Tell overture has been got out of the way), the close-ups of horses’ hooves and men’s boots, the bad guys at the railroad depot (one even looks like Jack Elam), the sudden silence of cicadas and then birds raised, and the whole notion of the evil railroad baron (well played by Yorkshireman Tom Wilkinson in the Gabriele Ferzetti part) with his even eviler henchman: Butch is like Fonda’s Frank in OUATITW. But the make-up people did a good job on William Fichtner, making his Butch look truly repulsive; unless he’s like that in real life but I’m sure he isn’t. 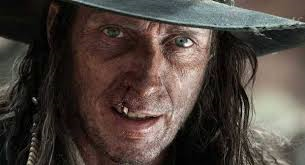 Creepy cannibal
.
No Fonda-ite handsomeness for him. He’s even a cannibal and has apparently eaten brothel madam Helena Bonham Carter’s leg, though this does give her the opportunity to have a sort of cannon fitted in her engraved ivory one, so that’s good.
.
.
.

Ivory leg
.
As for Dead Man, well, of course the reference is deliberate. In Dead Man Johnny was the dumb white man led by the nose by a savvy Indian (the brilliant Gary Farmer as Nobody) who referred to Mr Depp with some acuity as “a stupid fucking white man.” In the 2013 The Lone Ranger, too, it’s the Indian who is the clever one, despite what his name means in Spanish. Depp’s Tonto is the star; Armie Hammer’s masked Ranger is almost a straight-guy foil. In fact at one point Depp’s Tonto gets his own back and refers to the Ranger as a “stupid white man” (a PG13 rating obliges the excision of the intensifier). Butch is rather Lance Henriksenish, there’s even the above-mentioned cannibalism and a there’s a sub-Iggy transvestite (if you can imagine such a thing).
When we see Depp first he is most unlike good old Jay Silverheels in appearance. He looks fearsome, exotic and almost alien. In an interview with Entertainment Weekly, Monsieur Depp said that he had taken his guise from a painting by Kirby Sattler, I Am Crow, and indeed a glance at both reveals how closely he imitated that look.
.
. 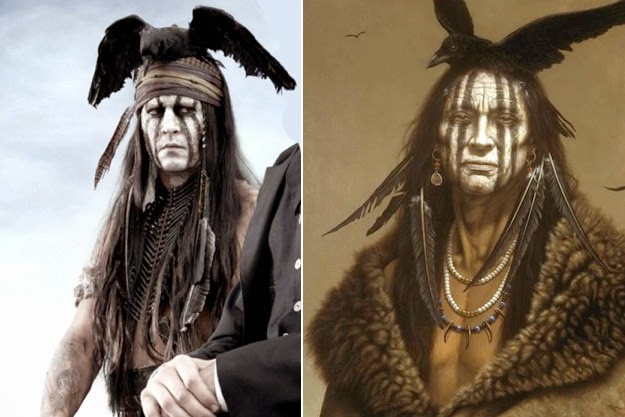 .
“[I] looked at the face of this warrior and thought: That’s it…The stripes down the face and across the eyes … it seemed to me like you could almost see the separate sections of the individual, if you know what I mean. … There’s this very wise quarter, a very tortured and hurt section, an angry and rageful section, and a very understanding and unique side. I saw these parts, almost like dissecting a brain, these slivers of the individual. That makeup inspired me.”
If you say so, Johnny. Even if Tonto is supposed to be a (renegade) Comanche, not a Crow.
Johnny Depp (one of the many producers) is very good, though. There is no doubt about that. There is something almost Buster Keatonish about him.
I didn’t know Armie Hammer, the great-grandson of the tycoon, and he hasn’t been in any other Westerns. He’s OK, if a bit square and bland. But you get the impression that squareness and blandness was kind of the idea. We don’t want him upstaging Johnny. But as a result, there isn’t really any magic or spark between the two characters. Mr Hammer appears in a frock coat, though, which is an improvement. No silly powder-blue tutu for him. I always hated that tutu.
.
. 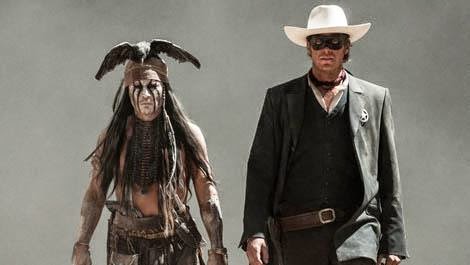 Frock-coated Ranger
.
The great thing about the movie, really, is the visual. It’s a stunning looker. Director Gore Verbinski and Montenegran cinematographer Bojan Bazelli did a great job. They had some spectacular scenery, of course, but they certainly made the most of it. They went to Monument Valley but train scenes were set in Durango (the Colorado one) and there are New Mexico, Cañon de Chelly, AZ, and Creede, Colo. sets too. A lot is shot in a washed-out, almost sepia tint. I really should have gone to the movies to see it. Even a big TV screen doesn’t do it justice.
.
. 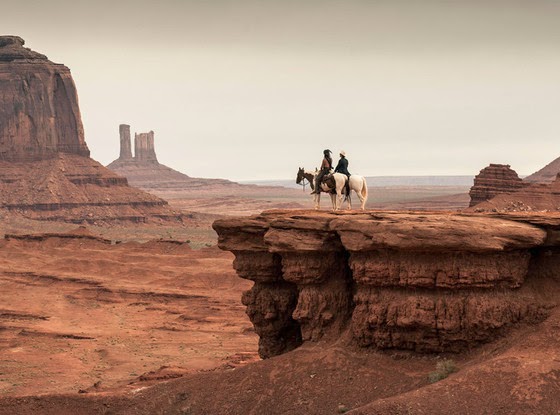 CGI or not, pretty damn good
.
Trains (and train wrecks) were a staple of the traditional Western. Recently trains have been simply too expensive and too rare to be part of the average Western, sadly. Even a ‘railroad’ Western like the 3:10 to Yuma remake had to pretend and simulate trains with a hundred yards of track and some fake smoke beghind buildings. In Appaloosa they only had a few meters of track and the locomotive hardly moved. However, with no expense spared Disney splashed out on two trains and wrecked ‘em. Of course, a lot was done with computer graphics but still it’s pretty impressive. There’s a Promontory Point scene, though The Iron Horse it ain’t.
The film can’t quite make up its mind whether to be a comedy, a pastiche or a serious Western. Its DNA is a bit jumbled up. It’s comic-violent, and serio-flippant. I enjoyed it though. The fact remains, however, that most viewers would neither know nor care about this ancient hero. Only aged Westernistas in their dotage like your blogger would even have heard of The Lone Ranger. Sic transit gloria Westi. I don’t think it can have made back its $200m budget, even with my extravagant amazon purchase.
.
. 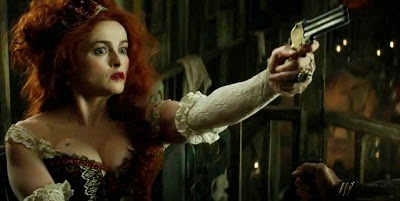 Butch doesn’t have a derringer but Helena has a kind of one. Looks like a very cut-down Henry. I think it’s a Volanic.
.
Silver becomes almost a burlesque character, and is not named until the final moments. Tonto duly rides a piebald, which is good. Fond memoreies of Scout.
Despite Depp’s Keatonish stone-faced performance, the long movie (149’) ends with a more Chaplinesque derby-hatted Tonto waddling into the distance. It’s a long-drawn-out shot because the credits are so extensive as to take up most of the 149 minutes. There are even hints of the New World in the score at this point.
You probably need to see The Lone Ranger if you are remotely serious about Westerns and you might enjoy it even if you are a normal human being too but whether it will last beyond the decade is a moot point. It probably will as it already smacks of one of those movies that will be on TV endlessly.
.
. 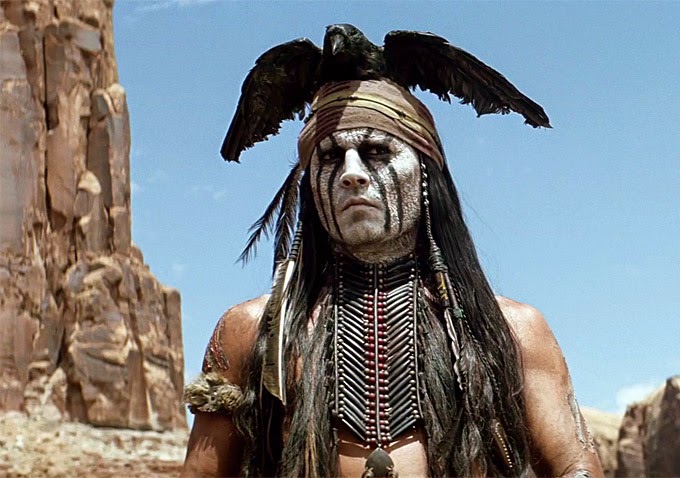