All the Pretty Horses by Cormac McCarthy

Cormac McCarthy’s All the Pretty Horses (Alfred A Knopf, New York, 1992) succeeded Blood Meridian, after a gap of seven years. It is one of the great American novels.

It has similarities with Blood Meridian in that it tells of the journey into Mexico and into adulthood of a young man but it has a softer, almost a romantic wash on the McCarthyite bleakness and it has a more contemporary setting (1949). On one level it is just a romantic tale of poor American boy meets rich Mexican girl and it goes badly. At its blandest it could even have been made into a movie with, oh, I don’t know, say Matt Damon and Penelope Cruz, someone like that.
.
. 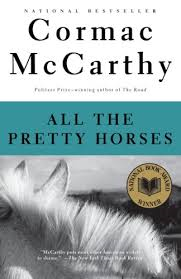 .
But the romance is just an overlay. You don’t have to scratch the picture’s glaze much to see the despair and come face to face with human evil.
The cutesy title taken from the sweet lullaby is on one level misleading but on closer inspection is appropriate. In one version of the song, provided in Alan Lomax’s book American Ballads and Folksongs, the words go:
Way down yonder, In de medder
There’s a po’ lil lambie,
De bees an’ de butterflies,
Peckin’ out its eyes,
De po’ lil lambie cried, “Mammy!”
Another version contains the lyrics
Buzzards and flies,
Picking out its eyes,
Pore little baby crying.
There is McCarthy’s poetic eye for landscape, nature, weather and wildlife. The land the hero passes through is a significant character in the dramatis personae and there is a deep knowledge and understanding of horses. There is also stunningly authentic post-War Texan dialogue (even though I was never there then, it rings totally true) rendered in that idiosyncratic way with no inverted commas, with some apostrophes omitted yet others retained (dont, cant, aren’t), with of used as an auxiliary instead of have, with coinings of portmanteau words (ticketstubs, grainpallets) and with no capitals for english furniture. ‘Sentences’ with no finite verbs. Color, especially reds. Some paragraphs, even single sentences, read as prose poems.
They heard somewhere in the tenantless night a bell that tolled and ceased where no bell was and they rode out on the round dais of the earth which alone was dark and no light to it and which carried their figures and bore them up into the swarming stars so that they rode not under but among them and they rode at once jaunty and circumspect, like thieves newly loosed in that dark electric, like young thieves in a glowing orchard, loosely jacketed against the cold and ten thousand worlds for the choosing.

Why Cormac McCarthy hasn’t been awarded the Nobel Prize for Literature is a complete mystery. 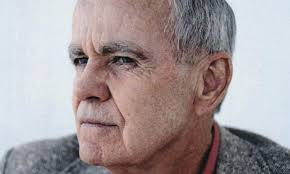 .
The plot starts bleakly enough as John Grady Cole, 16, his grandfather just dead, his parents divorced and his ranch sold, and his pal Lacey Rawlins, 17, run away like the teenagers they are and ride across the Rio Grande. But though “circumspect” they are “jaunty”; they cannot help themselves. Freedom and the future flow through their veins. They are joined by an even younger boy, a wild tearaway on a possibly stolen horse, who calls himself by the name of a radio evangelist, and they ride south.
There are no chapters as such; it is a much more stream of consciousness affair. But the novel is broken up into sections and there are clear ‘breaks’. The first hundred pages have a positive, hopeful ring to them as the two friends (they have lost the younger boy) get work on a ranch. But then the hacendado realizes the qualities of John Grady and he is taken up, promoted and separated from Rawlins. You sense the bad looming; it’s all going to go to hell. It does. A hundred pages later the boys are free and a new section begins.
Despite the late forties setting, the tale is very ‘old West’. The very first page contains half a dozen references which tell you where you are. The candleflame, the hat and boots, a calf bawling, a train and some mesquite brakes all set the context. Once in old Mexico it is even more the case. Horses, hats and Colt pistols. A long ride through open country. Sticking with a partner. A lonely man doing what a man’s gotta do. The scene where Cole repossesses his horses is pure Western movie.
.
. 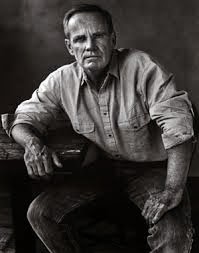 .
Cole is a complex character. We are told on page 6 that he is “ardenthearted” and that turns out to be true. He lies “a long time listening to the others breathing in their sleep while he contemplated the wildness about him, the wildness within.” Yet he is also bottled up, hard-boiled, amazingly so for a youth, laconic, tough as nails. He suffers great loss and is cruelly mistreated and brings to both grim fatalism. He has to kill to survive. Towards the end of the story we are told that “He felt wholly alien to the world although he loved it still.”
The loneliness is key. The tale ends with the notion that Cole has no home, no roots, nowhere to be. Mexico, Texas: it is no country for young men. He is Titus Alone. “…it was good that God kept the truths of life from the young as they were starting out or else they’d have no heart to start at all.” I mean, how bleak do you want it?
There is rather too much Mexican history as the great aunt lectures Cole on the Maderos for a good number of pages. We forgive.
The book is mordant, resonant, haunting, hard and luminous.
All the Pretty Horses was the first volume of The Border Trilogy, which continues with The Crossing, and concludes with the third volume, Cities of the Plain. Find our reviews in the index. When the books came out I eagerly snatched up The Crossing to read the further adventures of John Grady Cole, who did not appear in it. But I entered a new world of wonder and my persistence was anyway rewarded in volume 3.
.
. 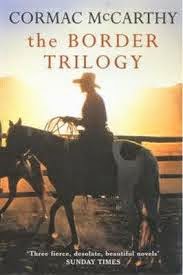