Cities of the Plain by Cormac McCarthy

.
.
Blood and horses
.
.
The last volume of the trilogy known as The Crossing, the series that many regard as Cormac McCarthy’s best work, is Cities of the Plain, first published in 1998. The biblical title is also presumably a reference to Marcel Proust and there are perhaps certain Proustian aspects to the novel, though in a (rare) interview in 1992 McCarthy said he did not care for authors who “do not deal with issues of life and death”, specifically mentioning Proust and Henry James. “I don’t understand them,” he said. “To me, that’s not literature. A lot of writers who are considered good I consider strange.” Actually, though, I don’t quite get the title reference, unless it be about the impending destruction of a way of life.
The first word of the novel is They. Readers who, like me, were disappointed not to find young cowboy John Grady Cole, the hero of the first volume of the trilogy, All the Pretty Horses, in the second volume, but who then became gripped by the story of the second hero, Billy Parham in The Crossing, will be very pleased to read that They because in the last tome the two heroes are united. It is 1952 and John Grady and Billy are working on a ranch in southern New Mexico, down near El Paso.
.
. 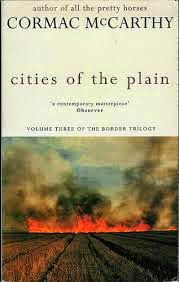 .
Neither is the green boy of his respective first story. Billy, now 28, is no longer the laconic loner but has become a loquacious cowboy with a penchant for swear words and John Grady, 19, is a quiet, compassionate man who devotes himself to the rescue of defenseless creatures, be they the pup of killed wild dogs in a mountain den or a sixteen-year-old epileptic prostitute in a Ciudad Juarez backstreet brothel.
Blood flows, again. There is a climactic and violent knife fight in a Mexican alley reminiscent of the prison fight in Pretty Horses and the description of the wild dog hunt is especially grisly. Bloody violence is an essential part of the McCarthy oeuvre, as readers of Blood Meridian will know. Life is hard, sanguinary and in John Grady’s case short.
John Grady, a Svengali of horses and a chess player with the combined talents of Capablanca and Kasparov, is the hero more than Billy, who is relegated to more of a sidekick role really, though a sidekick of grit and character. John Grady shows again his habitual integrity, for example when he politely but firmly tells a shady horse dealer to get his animal off the ranch.
Hey kid, he called.
Yessir.
You go to hell.
John Grady didnt answer.
You hear me?
Yessir. I hear you.
This is classic cowboy hero grit. Particularly touching and well done is the relationship between John Grady and the old hand Mr Johnson. John Grady protects him too, all the while showing the old timer enormous respect.
.
.

.
On page 59 Billy is shown to be reading Destry, presumably Max Brand’s 1930 novel Twelve Peers, re-released after the movie as Destry Rides Again. Sensible fellow.
There are no long rides into Mexico. The book is shorter, more directly narrative and less mystical than the foregoing volumes, though we are treated to a long epilogue in which Billy, a down-and-out 78-year-old in 2002, meets a man who might be Death who recounts how he dreamed of a traveler who dreams; this dream-within-a-dream tale is more the stuff of the novel The Crossing and makes you wonder if McCarthy had been reading too much Borges. In fact the blind maestro in the brothel is rather a Borgesian figure and come to think about it blind men do appear quite a bit in the trilogy. But most of Cities of the Plain is straight prose in which spare narrative in McCarthy’s gritty, eloquent Hemingwayesque style blends with the lyrical descriptions, especially of nature, with their long, long sentences, idiosyncratic punctuation and vocabulary that has you reaching for your dictionary. In her 1998 review in The New York Times, Sara Mosle wrote
Critics have compared his work to Faulkner’s. And like Faulkner, McCarthy is an acquired taste as well as a palate cleanser. He’s a stubborn, ornery writer, known for his ornate sentences, arcane vocabulary, casual disregard for standard punctuation and untranslated bits of foreign dialogue that offer little in the way of a narrative compass to guide readers along. He provides few temporal cues — ”meanwhile, back at the farm” — to help situate his stories in a landscape.
Actually, though, his disregard for standard punctuation is far from casual but coherent and deliberate, and in Ms Mosle’s scathing use of the phrase “untranslated bits of foreign dialogue” you can hear that American bourgeois terror of any tongue other than the form of English spoken in Upper West side brownstones, though such speakers would probably recognize the word bourgeois. McCarthy’s dialogue is Spanish, after all (or spanish as McCarthy would call it), one of the languages of the United States, not Martian. Get over it. Jeez. And if you really want ”meanwhile, back at the farm” writing, go back to your Readers Digest.
Sorry, getting a bit cross there.
.
. 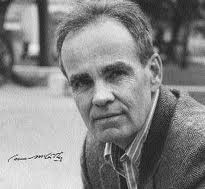 .
Almost as soon as readers are introduced to the love between John Grady and Magdalena, they just know that the affair is doomed. As John Grady does up his neat cabin to welcome the couple, you sense it will never be lived in. Death, tragedy and impending heartbreaking loss hover ineluctably over the whole second part of the book.
There’s a nice dedication on the final page:
I will be your child to hold
And you be me when I am old
The world grows cold
The heathen rage
The story’s told
Turn the page
When you turn the page you of course find five white flyleaves of nothingness.
The cow puncher dialogue is lovingly authentic. I admire the meticulous detail. Nothing is missed. The author is like an acutely observant watcher, recording every move and gesture with economical, even spare statement. The way a man lights a cigarette or puts his hat on before leaving is filmic.
In 2008, Wikipedia says, Andrew Dominik of The assassination of Jesse James… fame was developing a movie of Cities of the Plain to star James Franco (James Dean), but nothing seems to have come of it.
But McCarthy is best at the heathen rage.
Cities of the Plain is a fine novel in its own right and a worthy conclusion to a majestic trilogy.