Sam Peckinpah loved the theme of the ‘end of the West’ (click here for our essay on that) – perhaps because he was often in his youth in the 1930s and 40s on his grandfather’s post-West ranch at Coarsegold in California (which is what he named the camp in Ride the High Country), among nostalgic survivors. He was always fascinated by tales of the old Wild West days.

There is something elegiac about his Westerns. The most obviously example is The Wild Bunch, about aging gunfighters bewildered in a new, modern era of automobiles and airplanes, in a time when wandering gunmen were an endangered species becoming extinct. Or The Ballad of Cable Hogue  where once again the car symbolizes the end of it all, as it does, indeed, in the first reel of Ride the High Country.
.
.
So to entice two older famous Western stars (Joel McCrea, 57 and Randolph Scott, 63) out of retirement, or Western inactivity anyway, to make a film about two men past their prime trying to revive the past and maintain the old Western code of honor was a master stroke.
.
. 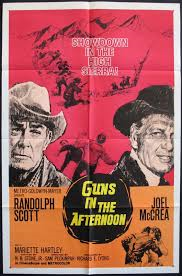 Guns in the Afternoon was the title of the original NB Stone story
and was retained for the British release of the film
.
.
Gary Cooper was to have been Judd, you know, had he not died in 1961. He would have been perfect but it must be said that McCrea was outstanding: upright, tough, and steely with integrity. An equally fine Scott is Gil Westrum, just as tough but roguish, charming and not quite so full of integrity – in fact larcenous. They play against and complement each other. Both performances were Oscarable. It is said they were originally cast the other way round but both felt more comfortable with Scott as Westrum and McCrea as Judd. They were certainly right.

One of the best aspects of Ride the High Country is undoubtedly the interplay of McCrea and Scott, the former stoic, flinty, scriptural, lonely, with all the most stirring speeches, the latter happy-go-lucky, with wavering moral purpose, essentially pathetic; he has the quips and good one-liners. Joel McCrea and Randolph Scott were never better.

.
.
.
.
According to Burt Kennedy, they flipped a coin in a restaurant for top billing. They are mentioned pretty well equally on the posters, though Scott’s name comes first.

Of course Peckinpah started making film Westerns (as opposed to TV ones) right at the time that the ‘end of the West’ became a major theme. The Magnificent Seven, which is about nothing else, came out in 1960 and Western after Western in the early 60s repeated this storyline and theme. Westerns that didn’t question themselves (like Scott’s and McCrea’s previous ones) were 1950s old hat, which is why the 50s are the high water mark of the genre. Peckinpah was only in his mid-30s when he started making Western movies but he contributed to and reinforced this theme. Call it revisionist if you want, many people do, though I tend to reserve that term for movies like Soldier Blue or Doc or Little Big Man from the 70s onward which almost mocked the genre or which turned its basic precepts upside down by debunking the heroes of the West or making the Indians the good guys.

That doesn’t mean as John Puccio says that “it’s been downhill ever since”. Far from it. The new school of Western has a huge amount to offer. I don’t think anyone could justifiably argue that The Assassination of Jesse James by the Coward Robert Ford is“downhill” from Anthony Mann or Delmer Daves or whoever.

.
.
.
The same went for cinematographers. The great Lucien Ballard, who shot this one, had worked on The Westerner for TV and also later photographed the big-screen spin-off Will Penny. Sam had him back after High Country for The Wild Bunch, Cable Hogue and Junior Bonner and had tried to get him for Dundee. That’s sticking together! Photographed partly on location in the Inyo National Forest, Ride the High Country is luminous, vivid and visually memorable.

Written by NB Stone, a specialist in TV Westerns, with very large contributions from Peckinpah (McCrea thought as much as 80%) and some from Bob Williams, who had a vast experience of Westerns since the early 40s, the screenplay is tight, professional and workmanlike, with occasional flashes of brilliance. “The only law up there is too drunk to hit the ground with his hat.” Or again, “All I want,” says Judd, quietly, “is to enter my house justified.” It is the credo of the hero and the theme of the film. It was, apparently, a favorite remark of Peckinpah’s father.
.

The support acting is outstanding. I would mention in particular RG Armstrong. I have said elsewhere that Armstrong’s greatest role was as Ollinger in Pat Garrett, and again that it was Boyd in From Hell to Texas, but the reality is that each film you see him in, you think that one is his best performance. Here, he is a tormented preacher who, we infer, has killed his wife for infidelity (she is referred to as a harlot on her grave marker) and who represses and strikes the daughter he really loves but cannot show it.
.

Edgar Buchanan is also excellent as the sad, broken-down drunk judge. What a fine actor he was. And of course he rather specialized in Western judges, especially disreputable ones. LQ Jones and Warren Oates are two of the five murderous and repulsive white-trash Hammond brothers and they are extremely good. Ron Starr does well as Heck Longtree, the young sidekick of Westrum who learns decency from Judd.

“Pick that up,” orders Judd as Heck throws down some paper. “These mountains don’t need your trash.” A very modern eco-message for the early 60s.

Shot in an uncharacteristic 26 days and only $60,000 over budget (which for Peckinpah was really under), the movie is tight, taut and tense.

It was Randolph Scott’s last film and what a way to go out. It should really have been Joel McCrea’s; he did a couple more not very good ones and that was probably a mistake. But two great cowboy heroes of the silver screen found a perfectly splendid film to say goodbye with.

It is amusingly ironic that the pair of penniless drifters should be played by two of the shrewdest investors and richest men in the business!

MGM’s Joe Vogel told Peckinpah he thought it was the worst film he’d ever seen and didn’t want to release it. But it was in the can and MGM needed product. They tried to hide it on a double bill with Victor Mature in The Tartars. Good grief. But despite the moronic MGM execs it was a fabulous film. Newsweek said it was “pure gold”, Variety thought that Scott and McCrea were “better than they have ever been”, Film Quarterly judged it the best motion picture of the year, and the movie won a number of awards at film festivals.

If the film is about integrity and moral courage, it is also essentially about solitude. It is, in fact, a masterpiece.