What a magnificent Western actor Robert Ryan was! In his stern, tough way, he was so very good that it is extremely difficult to name his best role. Was it opposite James Stewart in The Naked Spur? Bad Day at Black Rock would most certainly be a contender if you rate that a Western. His Deke Thornton in The Wild Bunch, of course. Even in low-grade pulp Westerns, like the dismal Lawman, he was superb. But you’d have to go a long way to beat his performance in  a late-1950s film, Day of the Outlaw. In that he is simply stunning. 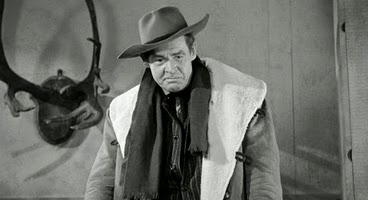 .
And this time he plays the good guy. Well, sort of. He is a complex character: he presents at first as a ruthless rancher, hard as nails, determined to extirpate the johnny-come-lately small homesteaders who have dared to string wire on ‘his’ open range. He is full of anger and disdain. That’s an ideal part for a tough-guy badman like Ryan, of course. But in this movie he develops into something far more: a man of courage and grit, ready to sacrifice the woman he loves and even his very life to save the town he helped build. In a quirk – a deliberate play, I am sure – Ryan’s character has the name of the sturdy, decent homesteader in Shane, Starrett. It’s a moving, gripping performance.
.
. 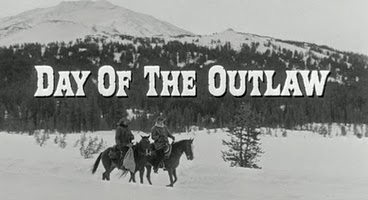 .
He had the good fortune to have Burl Ives opposite him, as the outlaw chief “Captain Jack Bruhn, United States Army. Formerly.” And Ives was also outstanding. Right from his dramatic entry nineteen minutes in (when the film suddenly lurches off at a tangent), bursting open the saloon door just as Ryan and the principal homesteader are about to draw on each other, he is like a whirlwind. He mixes power and menace in a blindingly good portrayal of a wounded man trying to hold the other six renegade white-trash thugs together. If you only know Ives’s Western acting from his part as Big Mac McCreedy in Alias Smith and Jones you have missed a lot because he was a splendid actor. He was superb in another noir, Station West, for example. But I don’t think he was ever better than in Day of the Outlaw.
.
. 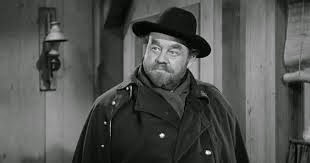 .
Both protagonist and antagonist are notionally bad men but both are oddly appealing.
.
.
Ten years later something very similar was to happen to James Stewart when Henry Fonda and his brutal gang descended on the small town of Firecreek but good as Stewart and Fonda were, they weren’t a patch on Ryan and Ives. The characters of Ryan and Ives are in some ways similar. The laws of electromagnetics notwithstanding, like poles attract. The men respect each other. They are both hard cases ready to resort to the gun but in fact (though this may be well hidden) both are decent deep down.
Of course Firecreek only had Vincent McEveety to direct it and from the outset he was a TV western director of moderate ability (though better than his brother), whereas Day of the Outlaw was helmed by André De Toth. Now De Toth didn’t always make good films. Some of his Randolph Scott oaters, for example, were distinctly ordinary, and if it hadn’t been for Randy himself might even have been duds. But just occasionally he did something really special. Ramrod, for example, his first, is a world-class Western. And Day of the Outlaw, too, his last Western film as director, is such a one.
.
.
Add to those two pictures the fact that he wrote The Gunfighter for Henry King, with Gregory Peck as tragic hero, and you see that De Toth was at his best at noir. All three of those pictures, Ramrod, The Gunfighter and Day of the Outlaw, fall into the category of Western noir. De Toth’s bleak world view and maybe his background as Europan filmmaker, combined with his love of the American hard-boiled, made him supremely good at noir. Non-Western films like Dark Waters, The Other Love, Pitfall and Crime Wave distinguish De Toth as one of the great directors of film noir. Ramrod, The Gunfighter and Day of the Outlaw are all in black & white, superbly photographed, with complex loner central characters, no happy-ever-after endings, and are really bleak pictures about betrayal.

.
.
De Toth starts Day of the Outlaw slow, establishing his characters and their relationships, and he gradually builds the tension. The last 23-minute sequence, when Ryan leads the gang out of town into the freezing Wyoming winter, is as harrowing as it is tense. And De Toth drew superlative performances from all the actors concerned. I would have to put this film at the top of De Toth’s Western list. 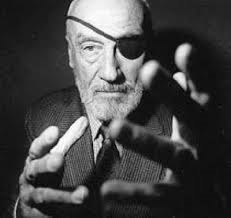 .
The bandits number seven, and quite right too. Seven is the proper number for all posses, bands of gunmen and outlaw gangs, as any true Western fan knows. The characters are really well done. Bruhn kindly introduces to the saloon (and us) the six ruffians under his iron command, one by one. First, Tex and Pace (the great heavy Jack Lambert, and Lance Fuller). Tex: “Rile him and you’re gonna hear some screaming in this town today.” Pace “derives pleasure out of hurting people.”

.
Denver (Frank DeKova) is half-Cheyenne: Bruhn says simply, “Him hate white man” but he adds that he is not quite so antagonistic to white women. Vause (Paul Wexler): “Bones covered with dirty skin but he’s the fastest draw in Wyoming territory.” Shorty, the old-timer (Jack Woody): “We soldiered together,” says the captain. Enough said. And the seventh is (he had to be) a kid, Gene (David Nelson). “He’s a fresh recruit but he’s learning fast.” Actually, that was wrong because he turns out to be the only one of the henchmen with any decency in him.
.
. 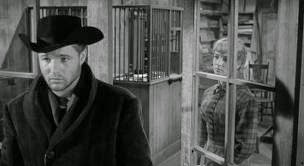 .
All of these actors except Nelson had been in loads of film and TV Westerns and were well-known heavies.  You will doubtless recognize them. They are all excellently menacing and brutal (I am a keen Lambert fan).
The women are firstly Helen Crane (Tina Louise), the wife of a homesteader. She is ashamed of herself (betrayal again) and is trying to break off her affair with rancher Starrett, who doesn’t want to but tells her to go back to her husband. Crane (Alan Marshal) is cuckolded, jealous and bitter, and no gunman, but he is determined to face up to Starrett, if needs be to the death. There’s also a younger girl who falls for the apprentice outlaw Gene. She is Ernine, played by Venetia Stevenson. Both actresses do a good job and are credible in their respective roles. Neither was what you would call a Western specialist. Louise was in six TV westerns and three movies; Stevenson was in twelve TV westerns but only two movies.
.
. 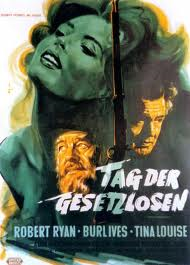 .
Despite the film’s noir credentials, neither woman is a classic noir femme fatale. They don’t manipulate. If anything, they are manipulated. It’s essentially a male story.
.
.
The writing is top notch, a Philip Yordan screenplay from a Lee E Wells novel. Yordan wrote The Man from Laramie and The Bravados, both themselves pretty noir, and you don’t get better than that. Well, you do, but not often.
It is, mostly, a siege Western and siege Westerns can be static, and ‘talky’, but when they are well done, as in this case, they build tension and menace, but they also develop character, as ‘good’ men are found wanting and ‘bad’ men step up with crisis revealing unsuspected qualities.
None of the characters in Day of the Outlaw is one-dimensional. They are all subtly drawn: the ruthless rancher who is ready to sacrifice himself, the scandal-touched wife who returns to the husband she does not love, the silly girl and the young outlaw who find love, the monstrous gang boss who, dying, does the right thing.
The setting is Wyoming, as is immediately clear. A harsh, pitiless Wyoming. Bitters is an impoverished, dirt-scrabble town in frozen mud. When Helen asks Starrett for mercy, he replies, “You won’t find much mercy anywhere in Wyoming.” The winter has been even harder than usual and a real blizzard is on the way.
.
.
It is all beautifully photographed, in austere black & white, by the great Russell Harlan. De Toth resisted pressure to use color – which was pretty well the norm for medium- or big-budget Westerns by 1959 – and insisted on black & white, to strengthen the noir vibe. Harlan had started in Hollywood as an actor and stuntman but had cut his Western teeth as cinematographer on B-Westerns and programmers in the late 1930s. However, in the late 1940s he had superlatively shot films of the caliber of Ramrod, Four Faces West and the great Red River.  In Day of the Outlaw he makes the most of the Oregon locations standing in for Wyoming and gives us a fearsome winter terrain that makes us feel cold even indoors. I am sure Sergio Corbucci was influenced by this photography when he made Il Grande Silenzio, and, by extension, Tarantino making The Hateful Eight – though both pictures are nothing by comparison to Day of the Outlaw. And Harlan also gives us stunning close-ups of faces which tell all.
.
. 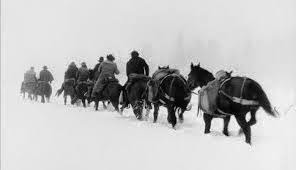 .
Highlights photographically and also of direction are the fistfight in the snow, the bandits’ dance with the fearing women (it’s tense and really creepy) and the final trek into the thick snow to nowhere, as the outlaws battle the elements and then each other, one murdering the other in a finally futile internecine conflict, like jackals tearing their own kind apart. And for me, because I am besotted by derringers, another high spot is when outlaw leader Ives pulls one on one of his men who is assaulting one of the women.
The original music is by Alexander Courage, now known for his theme for the first series of Star Trek. It is appropriately somber, oppressive and menacing.
I will not reveal the ending but it’s certainly bleak, and you go “phew!” at the termination of the film.

Day of the Outlaw is a fine Western by anyone’s reckoning. It is worth seeing for Ryan and Ives alone but it has many other splendid qualities too.

In his book The Western Noir, David Meuel calls Day of the Outlaw “an utterly uncompromising noir that also serves in much the same way that The Man Who Shot Liberty Valance serves Ford – as an eloquent and comprehensive summary of a life’s work.”