Don’t expect too much but it repays a watch
.

Cherokee Strip is a black & white Richard Dix Western of the early 1940s and as such is hardly a classic of the genre. Still, it has its points, especially as it features two of the best ever baddies, Victor Jory and Ray Teal (though the latter, sadly, only in an early bit part).

It was directed by the excellent Lesley Selander for Harry Sherman Productions and released by Paramount. Sherman productions dated back to 1918 and they mainly did huge numbers of the Hopalong Cassidy features from 1935 to 1941. Occasionally, though, they moonlighted on non-Hoppy oaters. Selander worked his way up in the silent movie business, became assistant director then got to direct B-movies galore. His first was a Western, in 1936, and he helmed dozens, including many with William Boyd of course, before turning to TV, where he did dozens more small-screen Westerns, especially episodes of Laramie. About his best Western was Fort Y,uma with Matt Dillon’s brother, Peter Graves. His direction might be described as workmanlike rather than inspired but he was very good at the action scenes and his movies are well paced.
.
. 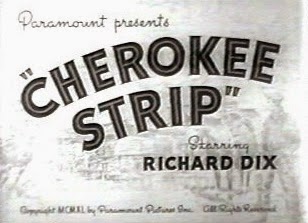 A minor Western but watchable
.
As for Richard Dix (1893 – 1949), he was RKO’s leading man from the dawn of talkies through 1943. At six foot and 180 pounds, he presented a burly figure and had been a successful athlete in earlier years (his first roles were in baseball and football movies). He was quite a box-office draw for RKO in the 30s and he did a good number of Westerns, starting with a Victor Fleming-directed silent, the first version of Zane Grey’s To the Last Man, in 1923, and finishing with The Kansan in 1943, when he was in his fifties. His most famous Western role was of course as Yancey Cravat in the 1931 hit Cimarron, for which he won an Oscar.
.
. 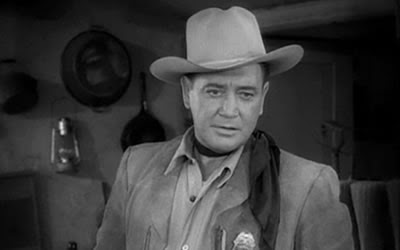 Solid
.
Cherokee Strip wasn’t a cheapo B-movie. It had the great Russell Harlan (of Red River fame) doing the cinematography. The writing (Bernard McConville, who wrote a good number of John Wayne oaters in the 1930s) is not at all bad, with attempts, at least, at subtlety and character development. But with modest budget, Selander at the helm and pretty minor actors alongside Dix in the cast it could hardly be described as much of an A-picture either. Still, it repays a watch.
We are in Goliath, Oklahoma, where Victor Jory is a classic corrupt banker, Barrett, who is slimily pretending to have buried the hatchet in a family feud with the Lovells. But who should turn up in town as the new US marshal but Dave Lovell (Dix), two-gun strong man (Fighting Marshal was in fact an alternate title of the film). His belt, probably left over from a pirate flick, has a huge buckle. For a while everyone pretends that the feud is over and Victor is now a goody but who could seriously believe that for long? I mean, it’s Victor Jory. 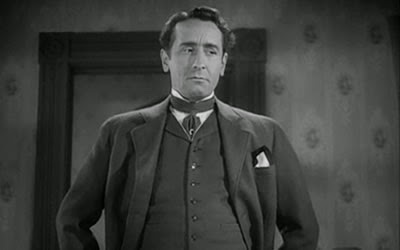 The best crooked banker ever
.
Obviously there’s a dame for the marshal to fall for. It’s Kate (Florence Rice, only three Westerns). Dix acts bashful at first, in a William S Hart sort of way, being especially evasive about his age. There’s equally obviously a comic old-timer sidekick, Ned (Addison Richards, a regular in that role). There’s a marshal/storekeeper set-up between Dix and George E Stone as Abe which reminded me of Sol Star and Seth Bullock in Deadwood. There’s a big shoot-out at the end in which bullets oddly ricochet off straw.
Watch it for Victor, if nothing else. No picture with Victor Jory as the badman could be worthless. That evil smile! 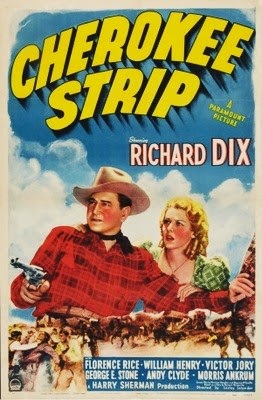