No great A-Western but still good
.

Despite movies such as Colt .45 and Winchester ’73, the shotgun was the real weapon of the West. Ubiquitous, powerful, not requiring particular skill, it was as effective as it was easy to use.
It was the title of a Sterling Hayden Western of the mid-fifties too. Co-written by Rory Calhoun (with some good punchlines) and directed by the ultra-experienced Lesley Selander, it is a bit slow and talky occasionally (unusually for Selander) but overall it’s quite a tight little oater with exciting moments, and it’s tough, gritty and uncompromising. It’s mid-budget and it’s in nice color, has some fine Arizona scenery, and the story features, yet again, Ben Thompson.
.
. 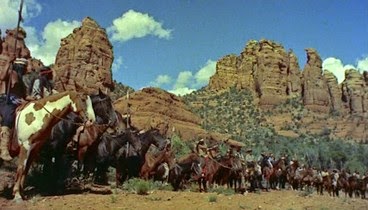 Nice AZ locations
.
Ben Thompson’s name was used, rather like John Ringo’s, as a standard gunslinger moniker. The screen Ben Thompsons had little or nothing to do with the real one. The name just sounded gunslingery. The real Thompson (1843 – 1884) fought for the Confederacy, then the Emperor of Mexico, and gained a reputation as a gunman. He went to Dodge and was hired in 1881 as marshal in Austin, Texas, where he was very effective.  He was murdered at the age of 40 in San Antonio in the so-called Vaudeville Theater Ambush.
.
.

The real Ben Thompson
.
Denver Pyle was Ben in The Life and Legend of Wyatt Earp on TV. Robert Dix (son of Richard) was Ben in the execrable Five Bloody Graves. In Shotgun Ben is impersonated by Guy Prescott, who had bit parts in various B and TV Westerns. He takes over the saloon. He has just spent six years in prison because of Sheriff Fletcher (Lane Chandler, husky-voiced actor in Westerns from 1927 to 1971) and his deputy Clay Hardin (Hayden). Combinations of ‘Clay’ and ‘Hardin’ in portmanteau names, from Clay Allison and John Wesley Hardin, also denoted ‘tough gunman’ in Westerns. Sheriff Fletcher is killed by a shotgun blast and Hardin, who only just escapes a similar fate, vows to avenge him. He leaves his Winchester and just takes a scatter gun.
.
. 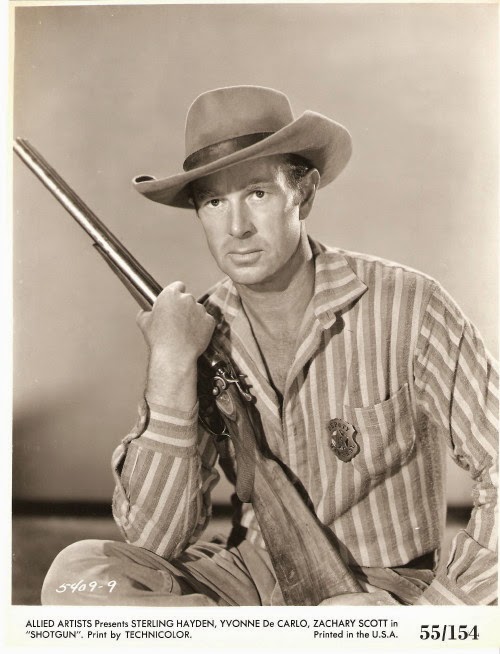 Tough-guy Hayden (with marshal’s badge on his pajamas)
.
Ben Thompson is not only a gunslinger, he also sells Winchesters to the Indians. How low is that. And Robert J Wilke the Great is one of his henchmen, whom Ben has allowed to be staked out by the Indians for a slow and grisly death.
.
. 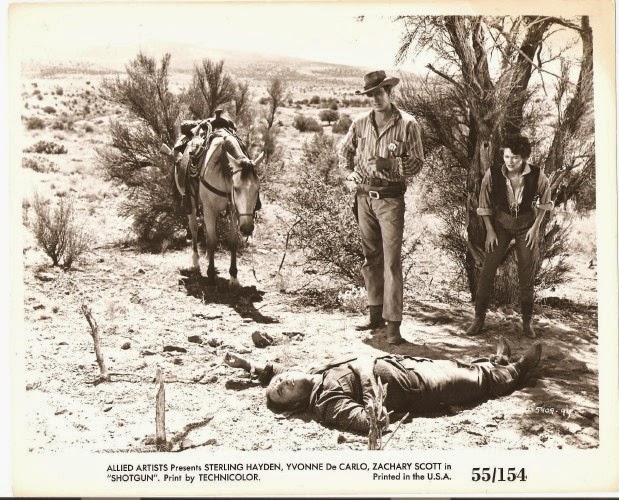 Sterling takes his time liberating Bob Wilke
.
Tied to a tree to watch this gruesome fate is a tiresome saloon gal, Yvonne De Carlo (usually bad in Westerns). Hardin (eventually) frees them both but is soon obliged to gun down Bob Wilke. So Sterling and Yvonne ride on and meet a bounty hunter, Reb Carlton (Zachary Scott, suave baddy of countless movies, though rarely Westerns, and said to be a descendant of Bat Masteron, who knows, maybe he was), who is also after Ben Thompson. So from there on it’s bandits and Apaches and tough terrain, and much derring-do.
There will be, inevitably, a shotgun shoot-out between Thompson and Hardin, and you may guess who will win.
Hayden was in some pretty dire Westerns (and hated them) but he was often damn good in them, and in this one, in the role of tough guy on a vengeance mission, rough on the woman he is with (mind, she deserves it, being a pain), he is worth watching. And to be fair to De Carlo, deprived of her usual glam dresses and fancy coiffure, clad in unflattering men’s clothes and forced to rough it in the desert, she acts well.
.
. 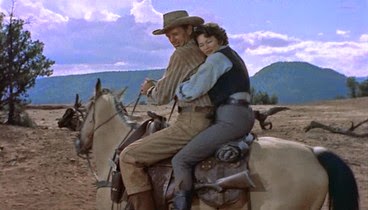 De Carlo unusually effective
.
At times, you could almost be forgiven for thinking that this was a Budd Boetticher a Western, and one could certainly imagine Randolph Scott in the Hardin part. It’s well shot, tough, violent and dark, with some black-humor touches. It isn’t Boetticher, though, and occasionally drags. Still, Selander does his stuff, Hayden is excellent and it’s definitely worth a watch – one of the better mid-50s Westerns from a not-quite-so-grand studio. 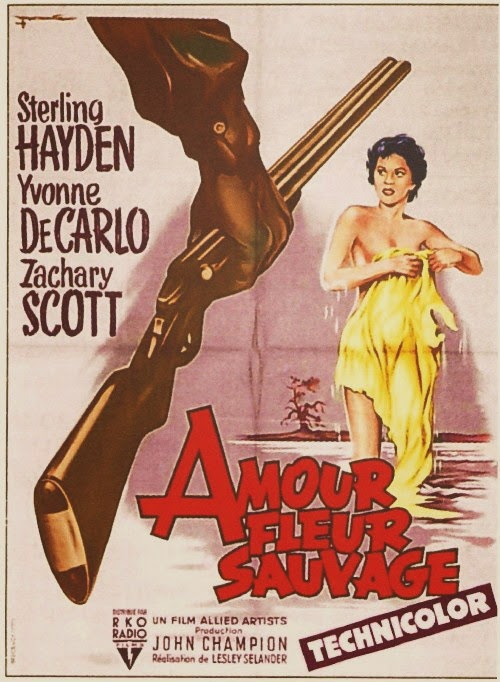