.
The names have been changed to protect the guilty
.
.
The 2002 two-part TV movie Johnson County War was based on a novel by Frederick Manfred, Riders of Judgment. I haven’t read the book but Wikipedia says
Riders of Judgment is the fifth book chronologically in Frederick Manfred’s Buckskin Man Tales, which trace themes through five novels set in the 19th Century Great Plains. The story fictionalizes Wyoming’s Johnson County War, based on Manfred’s original research (which relied heavily on Johnson County Historian Thelma Condit). Keeping in mind that his interests are fictional, his analysis of events is close to the story as recounted in Helena Huntington Smith’s The War on Powder River, which was published about ten years after Manfred’s novel.
Well, I don’t know about ‘close to the story’, judging by the film anyway. It is a very free interpretation of the facts.
.
. 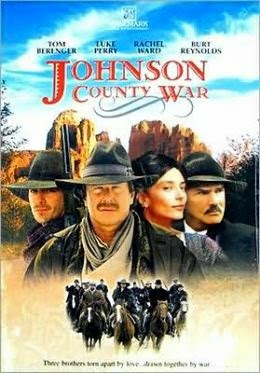 Ho-hum
.
The movie tells of the three Hammett brothers Cain (Tom Berenger), Harry (Luke Perry) and Dale (Adam Storke). These characters represent in some way the real-life Nate Champion, Jack Flagg and John Tisdale, respectively. Cain, for example, dies in a besieged and fired cabin, leaving a farewell letter on his body, like Nate Champion’s journal in April 1892.
.
. 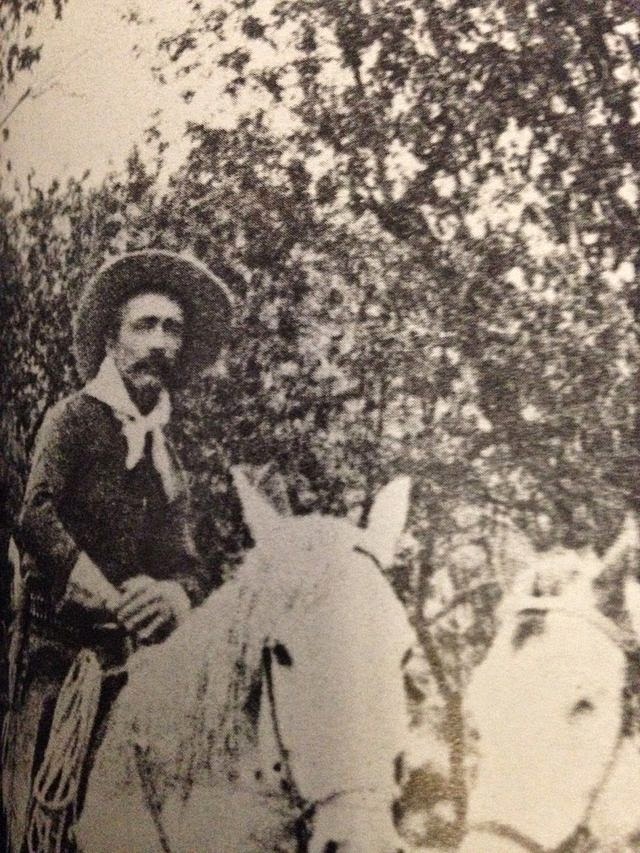 Small ranchers’ champion, Nate
.
The film is quite entertaining, though leisurely-paced. Its 240-minute runtime could usefully have been compressed. It was directed by David S Cass Sr, a TV actor in Westerns since the 1950s who went on to direct, and did quite a number of made-for-TV oaters (also reviewed: see index), such as Shadow on the Mesa, Lone Rider, Prairie Fever, Avenging Angel, Desolation Canyon and The Trail to Hope Rose. They are of mixed quality, Shadow on the Mesa being superior while Hope Rose was pretty sickly.
The big plus Johnson County War has is the sometimes beautiful photography of Alberta locations (standing in for Wyoming). I have just bought one of those B I G TVs and I must say I enjoyed that aspect. It was shot by Douglas Milsome, who had worked on Lonesome Dove.
There’s another Lonesome Dove connection: the screenplay was written by Larry McMurtry and Diana Ossana. I was slightly surprised to see that because I am a McMurtry fan but if I hadn’t seen his name on the credits I wouldn’t have guessed he’d written it. The characters are one-dimensional and some of the dialogue is pretty clunky.
The Englishman Lord Peter (Christopher Cazenove) in particular is a grotesque caricature, a frankly silly character, and Burt Reynolds’s hired gunman-marshal Hunt Lawton (presumably a reference to Frank M Canton, the former Johnson County sheriff hired to lead the Texas killers) is a comic-book killer. Mr Reynolds looks a bit odd too, cosmetically.  The big ranchers like Wally Tascot (Ken Pogue) – presumably Frank Wolcott – are snarling and ruthless villains with no redeeming features, and almost as incompetent as they are villainous.
.
. 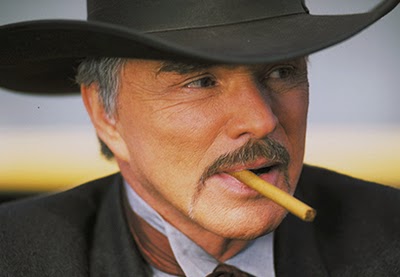 Burt the Bad
.
The Wyoming Stock Growers Association (WSGA) meets at the ‘Cheyenne Social Club’ rather than the Cheyenne Club, but it’s not James Stewart’s inherited bordello.
One of the brothers, Harry, is in cahoots with Lord Peter’s foreman Jesse (Jack Conley) and has a rustling scam going on. Jesse is the closest we get to a nuanced character and he hovers between Good and Evil (though generally comes down on the side of the latter).
The double lynching of alleged prostitute Ella Watson and storekeeper Jim Averell in fact took place in 1889, well before the April ’92 conflict, but in the film we have madam Queenie (Rachel Ward) and her husband or lover the writer Avery (Lyle St. Goddard) being hanged from a wagon by evil henchman Mitch (Silas Weir Mitchell), which sets off the fighting.
.
. 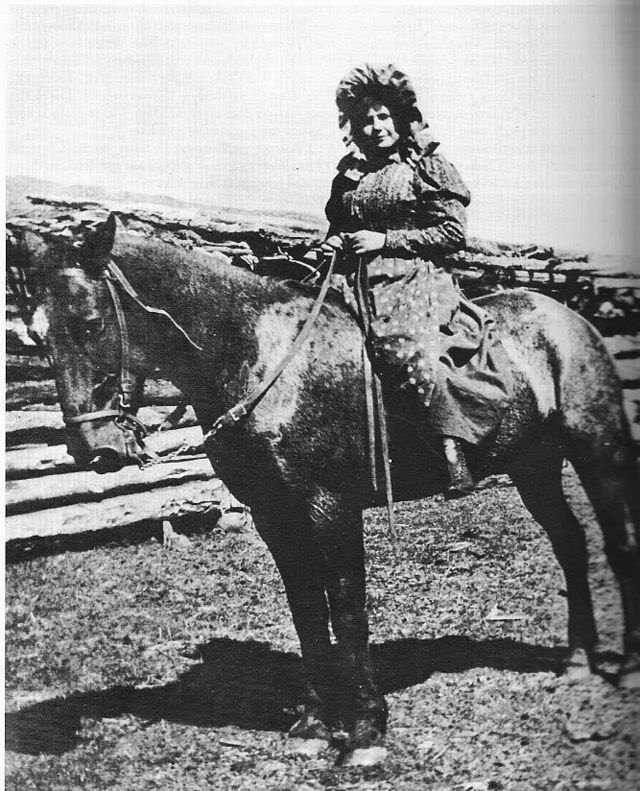 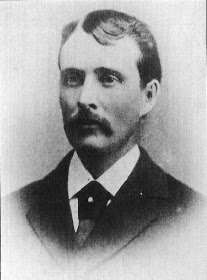 Jim Averell
.
Well, the ranchers try picking off homesteaders one by one, then bring in hired Texas gunmen for an all-out war. They aim for the place everyone calls Annalope but are too dilatory and decide to besiege Cain’s cabin instead. The siege drags on. They try shooting at the cabin, then use dynamite, but all attacks are foiled by the brave defenders.  Inside are not two trappers and Nick Ray but rather Hambone the fat Negro cook (Blu Mankuma) and bad singer Timberline (Adrien Dorval). The cook escapes, taken by the besiegers, while Timberline is shot to death. Outside, brother Harry (the other bro has been cold-bloodedly bushwhacked by evil Marshal Reynolds) sees what’s happening and rides for help and raises an army but arrives too late to save Cain. There is no corresponding siege of the invaders at the TA ranch or intervention by President Harrison or the Sixth Cavalry. The ranchers’ force is arrested at Cain’s cabin and taken off to Annalope, and the story ends there, so we are not told how they got off (charges were never filed against the wealthy ranchers, and the Texas gunmen were released on bail and fled back home never to be seen again).
The script has Dale Hammett’s wife Rory (Michelle Forbes) be such an appalling character that it is a total mystery why any Hammett, or indeed anyone else, would want to live with her. McMurtry’s women are often strong and sympathetic but this one is a mysogynist’s delight.
.
. 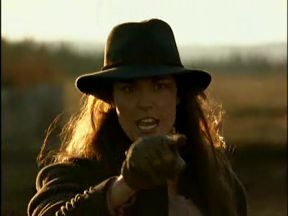 Appalling
.
When you think of the elephantine Heaven’s Gate (Titanic-like might be a better metaphor) you see that the Johnson County War has not been well served by movies. Owen Wister started it, in a way. He was writing very soon after the events (The Virginian was published in 1902) and he clearly took the side of the big ranchers. The lynching of rustlers is defended. But of course the novel and all its many film versions only deal with the ‘war’ obliquely. You could argue that The Ox-Bow Incident (book 1940, film 1943) was a rebuttal of that Johnson County pro-lynching approach. Jack Schaefer’s 1949 novel Shane and its 1953 film version are set in Wyoming and the homesteader vs. big rancher theme is central
to the plot (though there, of course, the gunslinger hero fights on the side of the smallholders). Dozens and dozens of Westerns took up this homesteader-against-rancher plot (they’re still doing it today in TV movies), with the heroes almost always on the side of the honest independent farmer. In Charles Portis’s 1968 novel True Grit we are told that in the early 1890s Rooster had gone north to Wyoming where he was “hired by stock owners to terrorize thieves and people called nesters and grangers … I fear that Rooster did himself no credit in what they called the Johnson County War”. Steve McQueen’s Tom Horn goes to Wyoming in the eponymous 1980 film and hires on as a gun for the ranchers. These books and films were all fine (The Redhead from Wyoming with Maureen O’Hara in 1953 was less so) but they gave the haziest notion of the War on Powder River or Wyoming Range War or the Johnson County War as it is now usually known.
The real story is a fascinating one, though. You can read about it widely. A very early indignant anti-rancher account was published in 1894 by witness Asa Shinn Mercer, The Banditti of the Plains. The book was suppressed for many years as the WSGA tracked down and destroyed all but a few of the first-edition copies, and the Association was said to have destroyed the second printing as well, as it was being shipped from a printer north of Denver, Colorado. The book was, however, reprinted several times in the 20th century. This year an edition by Palladium Press (a facsimile of the 1935 edition) has been released, if you want to try it. You can also have a go at Mari Sandoz’s The Cattlemen (1956) and Helena Huntington Smith’s 1967 book The War on Powder River. More recently you have Bill O’Neal’s The Johnson County War (2004) and John W Davis’s Wyoming Range War: The Infamous Invasion of Johnson County (2010).
.
.

‘The Invaders’
.
As for Hallmark’s treatment, well, I suppose you could try it.
.
PrevPreviousMan from God’s Country (AA, 1958)
NextLone Rider (Grand Army/Larry Levinson, TV, 2008)Next