.
It’s a Western. Kinda.
.
.
When is a Western not a Western? Oft have we on this blog, oft I say, addressed this thorny question. If you are a purist, you probably think that a Western movie has to be set west of the Mississippi, south of the Canadian border and north of the Mexican one, and at some time between the end of the Civil War and the end of the century. Myself, I take a rather more liberal view, and have reviewed oaters set in Canada, Mexico, indeed even in Australia, and in 18th or 20th century times. Quigley Down Under is indubitably a Western, in my view, as Western hero Tom Selleck takes on a Dodge City-obsessed gunfighter in the outback. You could even argue that The Last Samurai is a Western, with Tom Cruise as a Westerner in Japan. The Proposition, back in Oz, was certainly a Western, I think, and a very good one too. Ray Winstone was outstanding in it, and in 2010 he was back, this time as a South African in New Zealand, so he has had a pretty British Empire ‘Western’ career.
.
.

Ray Winstone
.
In Tracker, Ray is van Diemen, a Boer, a famed follower of trails, who arrives in another far-flung outpost of the Empire, New Zealand, and is offered a bounty to capture Kereama (Temuera Morrison), an educated Maori seaman (wrongly) accused of killing a British soldier and regarded by the colonial authorities as a savage. So, a straight chase/pursuit plot, right?
Wrong. Because something quite interesting happens. As a Boer, van Diemen has little love for the monolithic British Empire, and Maori Kereama shares that view. They begin to bond, almost before they have even met. And then you start to wonder, is van Diemen the one who’s running? When they finally come together (as inevitably they will) we find that it is not only hatred of the Brits that unites hunter and tracker.
.
. 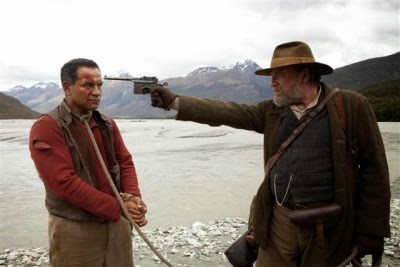 Ray gets his man. But then…
.
Such plots are hard to make lively. They tend to move at the pace of a walking man and involve much examining of the ground and sniffing the air, as the actors, with no one to talk to, dutifully flee/pursue. So the fact that this one has interest, and a growing interest, is a credit to writer (Nicolas Van Pallandt) and director (Ian Sharp, an Englishman who had done Tess of the D’Urbevilles).
It’ all very picturesque. On my new W I D E television screen it was enjoyable. It was shot in the Auckland Region, including in the Waitakere Ranges Regional Park, by Harvey Harrison. Full marks, Mr H.
.
.

Tracking
.
Faute de compagnon, Ray talks to himself a fair bit, or more often grunts. When he does speak he essays an Afrikaans accent, pretty well in fact, though traces of Cockney are to be discerned here and there. I must say, though, his hat was perfectly splendid.
Set this story in Arizona, make Temuera an Apache and Ray a Mexican and you’ve got a Western. I think it’s a Western anyway. 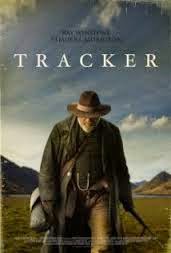