The TV schedules announced Rustlers as the 1919 short and I was delighted, not having seen it – I didn’t even know it survived. That movie is an early Hoot Gibson, the 29th of his 192 Westerns, and it was directed by John Ford. So I thought I was in for a real treat. Sadly, however, the writers of the blurb in the TV guide had got it wrong and it was the 1949 Rustlers that they were showing, which is a black & white Tim Holt programmer. Sigh.
Still, I watched it. Well, you gotta. And it was worth it. Not because it was any different from all the other Tim Holt Westerns. Tim was there with sidekick Chito Rafferty (Richard Martin) foiling skullduggery and smiling winsomely, as always. But because a derringer plays a central part in it.
.
. 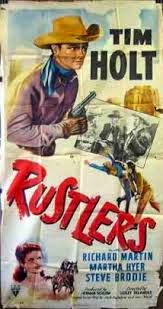 One of the long series of oaters Tim Holt did for RKO
.
Now regular readers of this blog, both of them, will know that I am besotted with what one reader told me was always called in her family “a villain gun”. I am something of a derringer aficionado, if truth be told, and any movie that contains one will go up in my estimation. Rustlers contains an especially good one.
In a 1953 episode of The Range Rider called Outlaw Pistols, the bad guy Laredo (George L Lewis) fools young Dick West, “all-American boy” (Dickie Jones), by crafting a derringer out of soap. He uses it to threaten the sheriff’s daughter and make Dick let him out of jail. See, not only a sneaky hideout gun for a bandit used against a sweet girl but it’s not even real! Boy, is that tricky. Well, perhaps the makers of that deathless TV show had seen Rustlers because a derringer is also used in a jail break there. This time, saloon gal Trixie Fontaine (Lois Andrews) bakes a cake with a derringer at its center and the dumb sheriff doesn’t even check it, though he makes a play for the cake, wishing to deny the chocolate sumptuousness to the prisoners Tim and Chito, and swallow it himself. Anyway, that was a thrill.
Rustlers was directed by Lesley Selander, like many of the Tim Holt series, and Mr Selander knew a thing or two about making oaters. He ought to: he was involved in 184 of them, from 1925 to 1968.
.
. 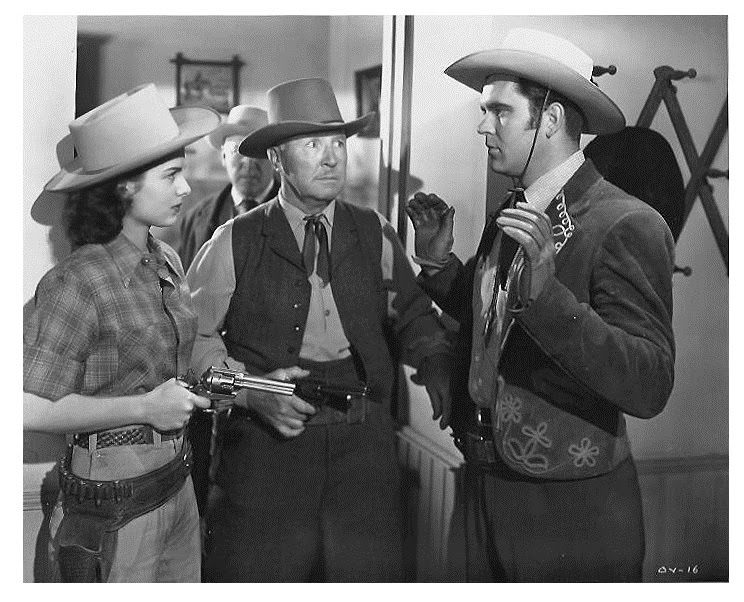 Martha is convinced that Chito is a rustler
.
The movie is slightly unusual because normally Tim shows no interest in the girls at all, leaving that to Chito, but this time he gets Ruth (Martha Hyer) at the end – very chastely, of course. No kiss or anything like that. Trixie is left to Chito, though as she wants to marry him, he runs a mile, as always.
This time Tim Holt is Dick McBride. Sometimes he was Tim Holt. His horse Lightning also plays a key role in the skullduggery-thwarting.
Well, it wasn’t Hoot Gibson and John Ford, but it made for a pleasant 61 minutes.