.
Rory rides again
.
.
Rory Calhoun first appeared in a Western, Massacre River, in 1949, got his first starring role in the saddle in the Jacques Tourneur-directed Way of a Gaucho (if you count that a Western) in 1952, and hit the semi-big-time when he was third billed after Robert Mitchum and Marilyn Monroe in River of No return in ’54. He then settled down to leading in mid-budget Westerns and did large numbers of them before becoming Bill Longley, The Texan, on TV in 1958. He made appearances in other TV Westerns too. His last big-screen lead in an oater was in the comedy Western Mule Feathers in 1977. He was 6’4” and handsome, he’d been a cowpuncher, among many other trades, in his youth, and he always looked good in the saddle. Some of his Westerns, many for Universal, were really quite gritty.
There was a time when sagas were Nordic tales of daring deeds and valor; then they became just family soaps. But the makers of The Saga of Hemp Brown at least tried to tell a tale of a noble man on a quest. It’s about a cavalry lieutenant who is unjustly cashiered for cowardice (cf. Buges in the Afternoon, Sprringfield Rifle, etc) and has to live a life of shame, shunned by ‘decent’ people. He is determined to track down the man guilty of framing him, the very mean Jed Givens (John Larch), in order to clear his name.
.
.

Badman Larch
.
Given that he wears his uniform after dishonorable discharge, with faded patches where the insignia once were, he was rather an obvious target for scorn. But eventually a floozy in a store sells him some range duds (and suggestively offers other services) and he blends into the scenery a bit better.
.
. 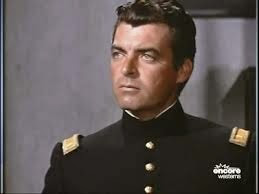 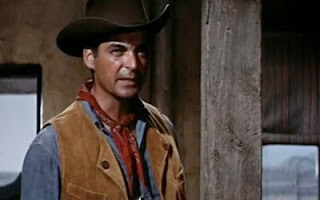 Rory in range duds
.
.
He gets on the trail of the evil Givens and travels south, south, ever south. He finds the renegade in a saloon owned by a Mr Bo Slauter (Morris Ankrum), called, in a rather macabre way, The Slaughterhouse, but there is a fight and Givens escapes again. Our hero meets up with a traveling show and, despite a semi-derringer, forces the top-hatted and curly-mustached owner (Fortunio Bonanova, 5 Westerns) to take him in the wagon, which is already occupied by the glam Mona (Beverly Garland, who was in a lot of big- and small-screen Westerns from 1950 on). Naturally it’s soon lerve between Rory and Beverly.
.
. 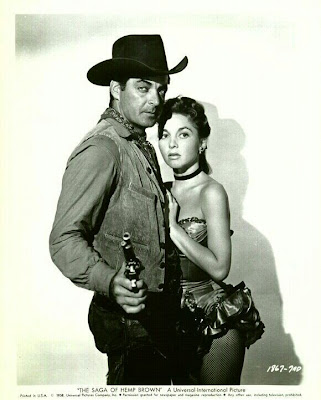 Rory and Beverly pose (Beverly probably later regretted it more than Rory did)
.
The best character is the outlaw Hook, who, astonishingly, has a hook instead of one hand. He is played by Russell Johnson, the professor from Gilligan’s Island who had a good second job in B and TV Western badmen.
There’s a daring bit when the camera zooms in on Mona’s legs.
There’s a trial scene and a lynch mob and several fistfights, though the latter are unusually badly staged so you can see that the thrown punches miss the aimed-at jaws by miles.
Some of the writing (Robert Creighton Williams from a story by Bernard Girard) is a bit plodding. “You’ll never get away with this, Givens,” says Rory at one point. There are other clichés.
There’s lots of plot.
In the last three minutes the villain confesses, the crowd rehabilitates the erstwhile coward and Rory gets Mona, so all’s well that ends improbably well.
This is a straight-down-the-line Universal Western of the 50s and as such no great shakes but it has its moments, it’s in CinemaScope color and is on balance enjoyable. You could give it a go, e-pards.

PrevPreviousLaw of the Badlands (RKO, 1951)
NextWalk the Proud Land (Universal, 1956)Next

PrevPreviousLaw of the Badlands (RKO, 1951)
NextWalk the Proud Land (Universal, 1956)Next
Jeff Arnold © 2022 – All rights reserved – Designed by BetterCallChris
Scroll Up