Ambush at Tomahawk Gap is an early-50s John Hodiak Western for Columbia. It’s actually quite good.
.
. 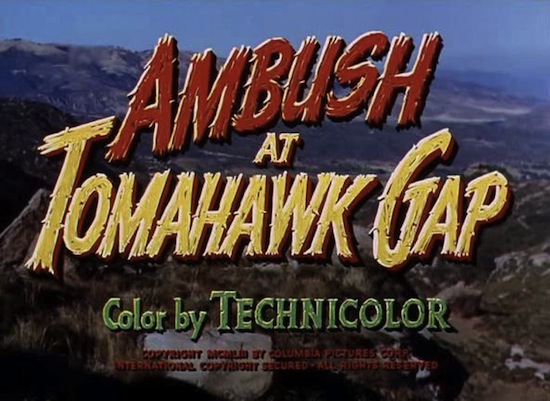 Nice color
.
Hodiak was one of those who in the 1940s filled a gap left by big stars serving in the armed forces. His early death in 1955, of a coronary thrombosis at the age of 41, meant that he did not become one of the really big Hollywood names and he was only in five Westerns: he was in the musical comedy The Harvey Girls in 1946 (if you call that a Western), then rather good as the Army captain opposite Robert Taylor in Ambush, an excellent movie, in 1950. In ‘51 he appeared with Clark Gable in MGM’s big picture Across the Wide Missouri and he finally topped a Western bill himself in two 1953 Columbia mid-budget oaters, when he usurped Jeff Chandler’s pet part playing the Apache chief, and Ambush at Tomahawk Gap. He wasn’t bad. He looked tough and was well cast in Tomahawk Gap as the ex-con from Yuma determined to get payback for the years he had unjustly served (for he was innocent, naturally).
.
. 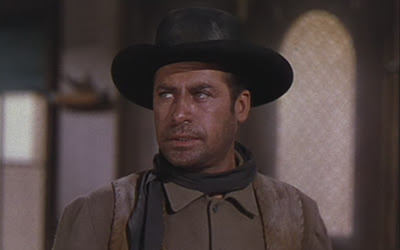 Hodiak is the tough hombre
.
The movie was directed by Columbia stalwart Fred F Sears, who started as an actor in 1940s Westerns. He appeared in a number of the Ray Nazarro-directed ‘Durango Kid’ oaters starring Charles Starrett (there were literally dozens through the late 40s and early 50s), and finally in 1949 made the leap to directing some. Sears excelled at churning out on-time and on-budget movies for Columbia and they loved him. He made some sci-fi epics like The Giant Claw, but in fact some of his oaters were really rather well made: tough, gritty Westerns. Ambush at Tomahawk Gap was a good example.
.
. 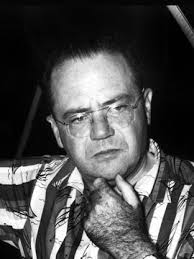 Fred F Sears
.
The story starts in 1862 with four ex-cons (Hodiak, David Brian as ruthless thug, John Derek – Mr Bo Derek, in his second Western – as the Kid, and the truly wonderful Ray Teal as the elder statesman con, Doc) released from Yuma Territorial Prison and arriving in Twin Forks, AZ. I like the way Brian spits at the name on the prison wagon. The four are immediately run out of town by the inhospitable sheriff (Trevor Bardette). I noticed that John Doucette was the barman in the saloon they head straight for. He often had barman roles, now that I come to think of it. Anyway, the men are after the loot from their stage hold-up, hidden in a cemetery in Tomahawk Gap, now a ghost town since the Apaches have run everyone out.
.
. 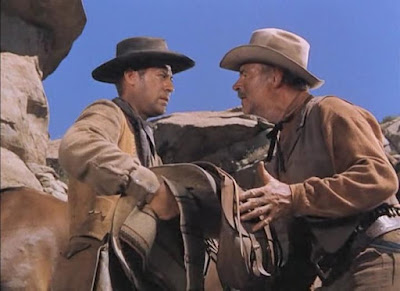 Right: my hero Ray Teal, kindly ex-con
.
They cross dangerous Indian territory to get there and pick up an escaped Navajo girl (Maria Elena Marques), who wounds the kid but then nurses him and – of course – it’s lerve.
Brian is the nastiest of the gang, Egan. The Kid is still save-able, thinks kindly Doc. Hodiak is innocent, of course, and just wants $1800 from the loot, which is the wages he would have earned as a cowhand in the years unjustly served in Yuma. Hodiak does the innocent cowhand toughened by prison time rather well.
.
. 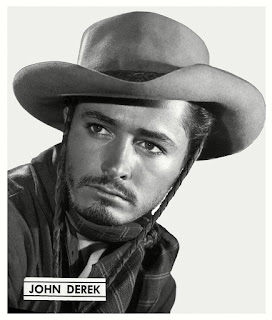 John Derek is the Kid
.
Brian was always good as the blond bully. He’d been a doorman in New York and could handle himself. He was the megalomaniac blond villain in Fort Worth, you will recall, the ruthless gang boss in Springfield Rifle and (his best Western role in my view) the crooked saloon keeper in Dawn at Socorro. He was a sort of Lyle Bettger with brawn. He became a regular on TV Western shows. Here he is a nasty piece of work, until an Apache arrow in the back does for him. Interesting aside: blond men could be baddies – think of Dan Duryea, Bettger, et al – but were rarely Western heroes, or if they were, they were, like Alan Ladd, not very good ones. You had to be dark to be a Western lead. There are quite a few cases of blond actors dying their hair to act goodies, the James Arness Syndrome.
The movie is in bright Technicolor, shot by Henry Freulich in Simi Valley locations. It was written by David Lang, his third Western movie (he later went on to write a lot of TV shows). It’s quite a good screenplay – not especially original but quite sharp.
There are two government agents following the baddies, hoping to recover the stolen Army payroll. The good news is that one of them is Percy Helton, a rather unlikely secret agent I suppose, and sadly he falls victim (off-stage) to the Apaches and is never seen again, which was a bit of a blow because I like Percy.
.
. 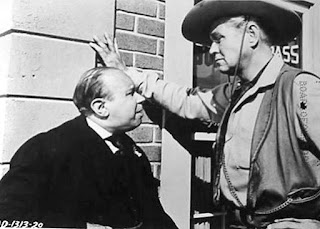 Talking to thug Brian, secret agent Percy Helton – Apache victim
.
Well, it all comes down to a climactic showdown in the ghost town with the divided white men fighting off the attacking stuntmen Apaches (who stupidly ride up and down the main street allowing the whites to shoot them off their horses at each passage, what I call The Law and Jake Wade Syndrome). One by one the white men succumb (Ray dies trying to save the Kid), until two survivors ride off into the sunset, but I shall not reveal which two: you must watch the movie to find that out. The last scene tells the fate of the loot.
You will definitely have seen worse, dear e-pards, and if I were you I would give this one a go.