The Adventures of Don Valiente and the Apache Canyon Kid

And of course many Western movies have been made there too, profiting from the landscape and that extraordinary pink light, both recently and in the early days.

The 2012 novel The Adventures of Don Valiente and the Apache Canyon Kid is set around Vegas, in 1922 – but don’t be fooled; it’s a Western alright. Co-author John Aragon (writer of Billy the Kid’s Last Ride) was born in Española, NM, north of Santa Fe and north-west of Las Vegas and is clearly steeped in the culture of that land. He collaborated by Skype (ain’t technology wonderful?) with fellow writer Mary Walters in Toronto, which isn’t the most Western of places, I suppose, but she still has a feel for the West. Together they have produced a highly entertaining novel.

It takes an idea from Cervantes’s The Ingenious Gentleman Don Quixote of La Mancha and transposes it to the American West. Instead of reading too many tales of knightly chivalry, this Quixotic character, who calls himself Don Valiente, has perused too many stories of gunfighters of the old West, and indeed, claims to have been one of them, standing with six guns blazing by the side of the likes of Wyatt Earp and Wild Bill Hickok. He is very ancient, and very adept with his .44s, so who knows, maybe he did. Don Valiente’s Rocinante is the splendidly named old nag Relampágo, who is as bony and decrepit as his master, yet, like his master, possessor of a great heart.
.
. 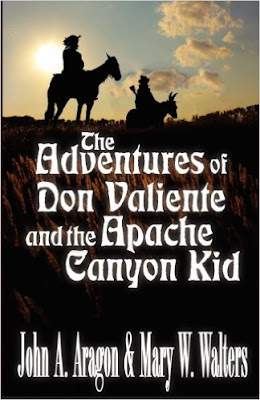 .
Don Valiente’s Sancho Panza is an eighteen-year-old orphan girl known as Roz, and her mount is the mule Dapple (a word used in English translations of Don Quixote). She is first discovered, in flagrante delicto, naked in the arms of her true love, Nanette, and is nearly lynched for it by Nanette’s brothers. There must of course have been many homosexual men and women in the old West; indeed, perhaps there was a higher proportion than elsewhere, given the West’s attractiveness to outcasts and loners. But we rarely hear about them (there is the tawdry Brokeback Mountain, I suppose, but that was the modern West) and it’s refreshing to have a lesbian as one of the central characters. Don Valiente, however, mistakes her for a beardless boy and takes him on as apprentice, to learn the code of the caballeros. She learns fast. Roz decides that a girl’s gotta do what a girl’s gotta do.
Well, there are many adventures and I won’t spoil them for you. There are classic Western villains, Kruger and the Beast, who are brutal escaped convicts, whom the noble Don and his squire are determined to track down. At one point the heroic pair encounter a movie set and mistake the extras for real Comanches, and charge them, in order to rescue a fair maiden, with movie cameras standing in for windmills. Early Hollywood names are sprinkled about the set but they are studio boss William Meyer and actress Fanny Pickford. Other characters include a decent Mexican-American sheriff and a nasty Anglo deputy.
I was very pleased to meet a real character, though, Elfego Baca (1865 – 1945), gunfighter turned lawyer. He defends Roz on a murder charge in the courtroom drama that comes towards the end of the book. Baca was a splendid character. And I was pleased to have mention of that wonderful Las Vegas hotel, the Plaza, too.
The book is well written in a correct and literate style, and properly edited, which is refreshing. Apart from confusing the preposition like with the conjunction as (but that’s a North American thing) and abandoning whom for the universal who (which these days is so common as to have become correct), and one use of loathe for loath, I found nothing to complain about, though I am horribly picky and you know I never ever make any misstakes myself.
The rather Victorian chapter headings are also fun, sometimes winking at us in a self-knowing way, such as the one for Chapter XXI “in which Kruger, Leta and the Beast bushwhack Don Valiente’s people in the best tradition of a Wild West dime-store novel”.  It’s a straight narrative; there is no irritating post-modern jumping back and forth in time. The cast of characters is long enough to excite interest and variety but not so long as to make you wonder who this is now, as happens in so many stories these days. All in all it’s well constructed. Skype obviously works.

There is a serious point about how ready people are to jump to the wrong conclusions, and hang other people on the basis of them, and how truth (and justice) can become impossibly twisted at the drop of a (feathered) hat.

You will enjoy this book and I urge you to read it. It is at once a saucy romp, a classic Western pursuit drama and an affectionate pastiche of the dime novel. A lot of fun.

PrevPreviousButch Cassidy and the Sundance Kid in fact and fiction
NextThe Black Dakotas (Columbia, 1954)Next

PrevPreviousButch Cassidy and the Sundance Kid in fact and fiction
NextThe Black Dakotas (Columbia, 1954)Next
Jeff Arnold © 2022 – All rights reserved – Designed by BetterCallChris
Scroll Up