What an anti-climax Springfield Rifle was, which Gary Cooper did, under his contract with for Warners, after the truly great High Noon. Springfield Rifle is a yarn about the Civil War in Colorado which starts with Gary Cooper being court-martialed for cowardice. Of course we understand in 0.2 of a microsecond that it must be a set-up. This was one problem Cooper had as a star (was it the only problem?): he was totally unbelievable as a bad guy. And yes, Major Lex Kearney is indeed a secret agent braving the scorn of his fellow officers and his son (who runs away from school in shame) all to foil the South and stop horses being stolen and sent to aid the Confederacy. Standard Warners stuff.
.
. 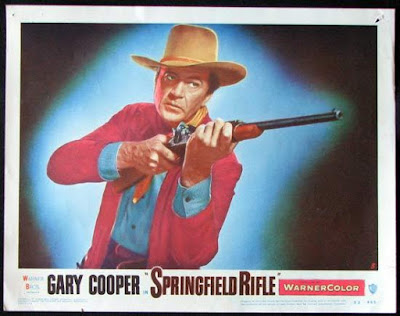 Another early-50s Western for Warners, sigh
.
[By the way, when I say Coop was not credible as the bad guy, I don’t mean that he couldn’t have a shady past and redeem himself. That he did with aplomb. Think of Man of the West, The Hanging Tree and They Came to Cordura.]
.
.

Major Coop becomes a civilian
.
There’s Max Steiner music in a rather old-fashioned style but quite stirring and a lot better than the score he wrote for Coop’s early Warners oater Dallas. There’s also bright color and nice Alabama Hills and Calabasas, California scenery that looks like Colorado. Edwin B DuPar was the DP; not a cinematographer I knew but like Coop he had started on silent Westerns in 1925 and he had done Silver River for Raoul Walsh in 1948. Later he worked on Maverick, Bronco and Lawman on TV.
.
. 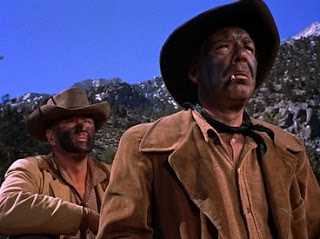 Badman Lon
.
André de Toth directed. De Toth had directed a Western of the caliber of Ramrod and co-written one as good as The Gunfighter, so respect. He also directed (later) the absolutely superb Day of the Outlaw. He worked with Randolph Scott and directed no fewer than six Randy oaters. Occasionally, though, he did Westerns better forgotten, like The Last of the Comanches with the miscast Broderick Crawford, and I’m afraid Springfield Rifle is almost in this class.
A few of my favorites have small parts: James Millican and Alan Hale Jr are there and Guinn ‘Big Boy’ Williams is a sergeant. Fess Parker also has a tiny uncredited walk-on.
No romance, which is good (except for a quick snog with his wife which doesn’t count). It’s a straight boys’ Western (soppy girls just spoil it) and fine if you forget High Noon and accept it for what it is.  Having Coop in it, it must be a cut above.
.
. 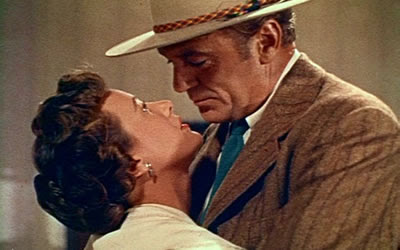 No romance, phew. Just a perfunctory kiss with his wife but that doesn’t count.
.
I saw it as a boy. I don’t remember much now but I do remember Gary Cooper being drummed out with the yellow paint. It was an image that stayed with me and the burning injustice of it got my juvenile blood up.
.
. 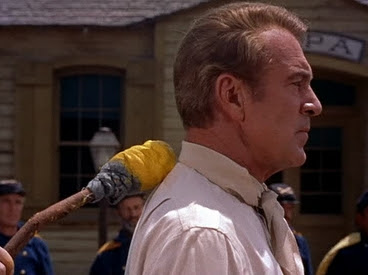 Drummed out
.
And there’s the sub-plot (nothing more) of how the breech-loading Springfield won the war for the North. It did?
.
.

Barely mentioned
.
I quite like this movie on its own terms, i.e. a juvenile oater. It’s obviously watchable, having Gary Cooper in it, but I’m afraid that’s about all I can say.
Oh, the villain Paul Kelly (rather good, actually) has an excellently caddish moustache. 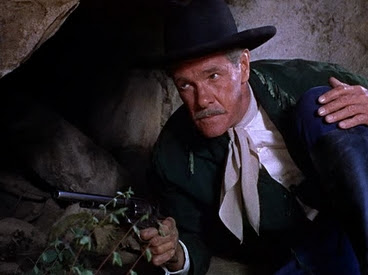