Only two years after constructing the Canadian Pacific in Cariboo Trail for Fox, pistol-packing railroad engineer Randolph Scott was down in Nevada for Warners laying rails between Virginia City and Carson City. He did it with aplomb because he was Randolph Scott, one of the best Western actors ever.
.
. 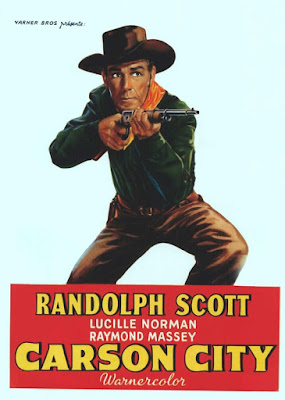 The best of Randy’s Westerns for Warners
.
.

Of course Randy knew Virginia City quite well, having been there in 1940 with Errol Flynn. But that’s another story.

Carson City is a bright, breezy romp, a pretty standard plot but done with panache. It was André De Toth’s fourth Western as director, and his second with Randy. It was shot in the studio’s new Warnercolor, and was written by Sloan Nibley, a Roy Rogers regular, and Winston Miller, who had co-written My Darling Clementine. The New York Times review at the time said, “Sloan Nibley and Winston Miller, the scenarists; Andre De Toth, who directed, and practically the entire cast have performed their assignments with a competent jauntiness that suggests they weren’t out to fool anybody.” 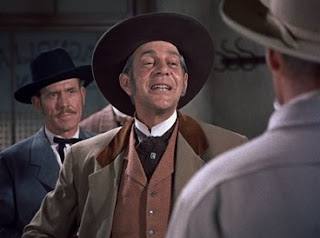 Massey slightly less awful than usual
.
I like Carson City. It’s a lot of fun. It’s true it has Raymond Massey as the principal villain (replacing Charles Ruggles), and Massey was a bad actor all his life, a dreadful ham and especially bad in Westerns (e.g. Sugarfoot, also with Randy). But he does somehow manage to keep his overacting in check this time, a bit anyway. Perhaps it was De Toth. And he does have James Millican as his chief henchman, always a help – in fact Millican’s restrained acting shows Massey up.
.
. 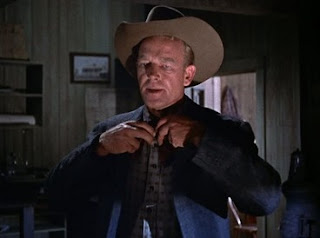 Millican is chief henchperson
.
The dame is a bit of a pain too, newspaper editor’s daughter Susan Mitchell (Warner starlet du jour Lucille Norman, an ex-singer in pretty well her only female lead and her only Western). Norman’s character hovers between the silly and the dumb. She has make-up apparently applied with a trowel.
.
. 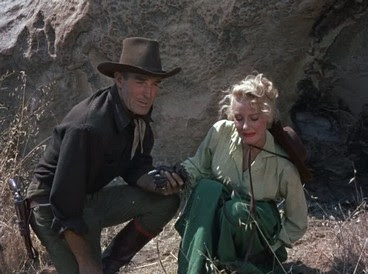 He gets her in the end and they ride off on the caboose
.
But all the rest is just dandy. A banker and a railroad baron (Larry Keating and Thurston Hall), whom of course you expect to be crooked because they are a banker and a railroad baron but aren’t, want, rather absurdly, to build a rail link to avoid the stage robberies plaguing the Comstock area. They get happy-go-lucky railroad engineer Silent Jeff Kincaid, excellent first name for a Western hero, played by Randy of course, just back from Panama and discovered slugging it out in a saloon, to build the line through mountainous terrain. Little does Jeff know at the time (in fact it takes most of the movie before he works it out, doh) that mine-owner Massey is the one behind the stage robberies. He runs a gang dubbed The Champagne Bandits, so-called because Massey believes that if you treat the stage passengers to a slap-up picnic with fancy booze and only rob the bankers, the bandits will get their sympathy. He may have had a point.
Well, Randy arrives in Carson City to find his half-brother Alan (Richard Webb, small part in Distant Drums, later to become a regular of TV Westerns) and his (Randy’s) childhood sweetheart Susan (la Norman). Alan is dead-set on bringing Susan to the altar so he doesn’t welcome brother Jeff at all. Work on the railroad starts under Silent Jeff’s direction (actually he is far from silent; perhaps it was an ironic moniker) and he is helped by a rough crew under competent foreman Hardrock Haggerty (William Haade, usually a Western heavy). It’s a post-war pro-progress American film.
There’s a lot of action, well handled as usual by De Toth, with bar-room brawls (with a thrown chair breaking the mirror behind the bar, obviously), murders, landslides, and mucho chasin’ and shootin’. There’s a lot of energy in the picture.
.
. 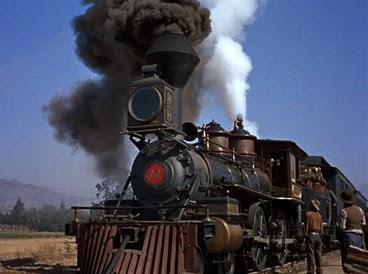 Excellent train – and it’s held up too
.
There’s an excellent train, held up in the last reel. There’s a final shoot-out in the rocks (Bronson Canyon), not quite up to Winchester ’73 standards maybe but at least as good as many other oaters (I’m sure Budd Boetticher had seen Carson City and admired that sequence). Altogether, the movie is very satisfactory.
The movie was slated to be directed by Michael Curtiz but he dropped out once Errol Flynn (who disliked Westerns) turned it down. I’m glad: De Toth and Scott were better. Carson City is probably the best Western Warners did with Scott. The movie premiered in Carson City, natch, and made a lot of dough for the studio.

Well worth a watch.