Gallowwalkers starts with a rape and a decapitation, so is not for children or the squeamish. It has a distinctly spaghetti tone to it and is an example of what is fast becoming a genre, twenty-first century post-spaghettis which
border on the pastiche. But it is also a horror movie. We’ve had Cowboys & Aliens: now we get Cowboys & Zombies (horror adepts tell me there is a difference between the undead and zombies but I’m afraid I’m not aware of it). There are also echoes of Mad Maxery. It looks as though it was filmed in Spain, in the best spag tradition, though in fact it was shot in Namibia (in 2006). It was a big-budget affair.
.
. 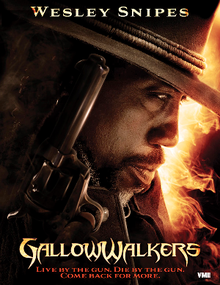 .
It stars, in his only Western, action-man Wesley Snipes, the sole actor in the cast whose name I knew, as a Clintish taciturn lone gunman. Wesley is nice to his horse so is obviously a goody, as far as goodiness goes in these pictures. In the best spag tradition, he seems to be bent on revenge but he also seems to be cursed by the devil, or someone. Anyone he kills comes back to life, which must be inconvenient for a gunslinger. Snipes occasionally lapses into anachronistic modern urban street-talk, which is off-putting, but generally manages OK.
.
. 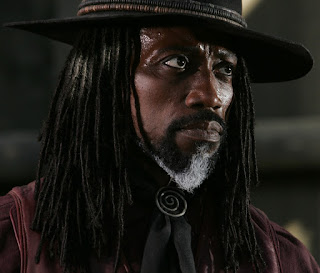 .
There are strange red-robed armed clergymen who arrive on a railroad push cart. They have their lips sewn together for some odd reason, though they are able to mutter. Other characters have no skin (though they sometimes borrow other people’s). It’s all rather odd.
There are quotations of Once Upon a Time in the West, especially when Wesley dispatches the three holy gunmen at a railroad halt. You may think that’s a good thing. 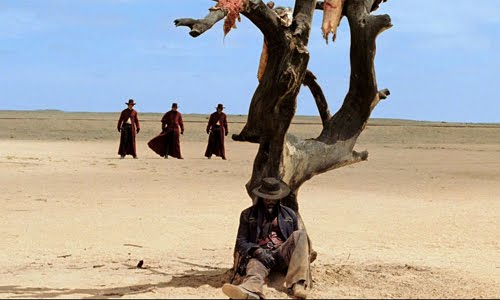 .
The movie was directed and co-written by the rather splendidly named Andrew Goth, about whom I know nothing. The direction of Gallowwalkers is patchy, though, and it’s one of those films where you have to pretty well guess what the plot is, and your guess could be as good (or bad) as the next guy’s, I mean person’s.
The women are all saucily-dressed, and just sex objects, as they were in spaghetti westerns. It’s unpleasant in that way.
.
. 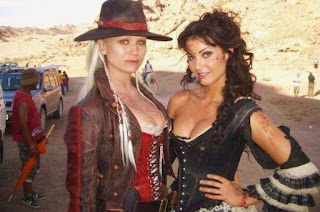 .
You feel that the second w in the title ought to have been capitalized, even though the words are run together but for me it’s an entertaining illustration of how in English a plural noun becomes singular when used as a pre-positioned adjective, in the same way that you can have scissor-sharpeners or a trouser pocket. The posters used all-caps to get round the issue. But anyway, where was I?
I suppose you could watch this movie, if you are a fan of trash.