Paramount’s The Covered Wagon was an important milestone along the road (or trail) of the
Western movie. It was the first real epic Western – unless perhaps you count The Birth of a Nation – and it is one of the handful of such films that have made a real contribution to the development of the genre (you can have fun suggesting others). Not to be outdone, Fox replied the year after with a similarly big-budget ‘nation building’ epic, The Iron Horse, with the hint of a suggestion that just as trains had replaced covered wagons in the West, so Fox’s Western movie had replaced Paramount’s…
.
.
Early 1920s Westerns had been unremarkable, often two-reelers, often juvenile. Tom Mix was all the rage and was making movies like Just Tony, Sky High or Tom Mix in Arabia – a whole lot of fun, certainly, especially for boys, but no one would call them splendid or even serious examples of the genre. 1922 saw a mere fifty Westerns released and most of these were second features or programmers; even better dramas like King Vidor’s The Sky Pilot (1921) created little stir. But The Covered Wagon and The Iron Horse suddenly made the Western both bankable and respectable. Critical and public acclaim for both movies was enormous, nationwide. Adults could now think of a Western as a serious film, worthy of their time and money. The year after The Covered Wagon the number of Westerns released tripled. The Western was never the same again.
.
. 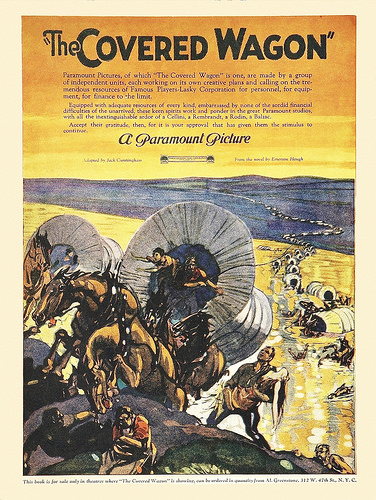 The Western becomes epic
.
However, The Covered Wagon hasn’t lasted too well. Part of this may be due to the writing: the narrative is pretty banal and does not really address the epic scope of the great trans-continental treks and the settlement of the frontier. It was written by Jack Cunningham, a former newspaper editor who was famous for churning out scripts – he once completed ten five-reel films in ten weeks – from a novel (which I haven’t read) by successful Western novelist – and friend of Pat Garrett – Emerson Hough (pronounced huff). Not until Red River in 1948 did we get a storyline worthy of the sweeping Western big canvas.
Another problem was the director, James Cruze. He was no DW Griffith or John Ford. Though one of the highest-paid directors of Hollywood at the time, Cruze made films which were (with exceptions) rather plodding and unimaginative. This is especially true of his big American history pictures (such as Old Ironsides and Sutter’s Gold). Cruze seldom moved his camera and cared little for editing. As William K Everson points out in his book A Pictorial History of the Western Film (The Citadel Press, New York, 1969), the US Cavalry’s ride to the rescue is staid and uninspiring. Even the usually foolproof runaway horse sequence is done in one single long shot. And the ‘riders’ on barrels jigging up and down in front of back-projection were embarrassingly bad, even for the time.
.
. 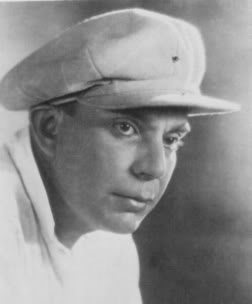 James Cruze
.
It is true, however, that Cruze’s static camera approach gave the film an almost documentary feel and this heightened its credibility and ‘historicism’. The cameraman was a master, Karl Brown, Griffith’s former assistant – and it is interesting to speculate what Griffith would have made of the film had he not deserted the genre. Such was the panoramic grandeur of the photography, especially the shots of the seemingly endless train of wagons (over 400 were used) that it is no wonder the film captured the imagination of audiences. Even watching it today you marvel at the spectacle.
.
. 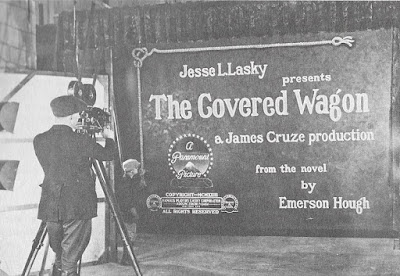 Karl Brown shooting the main title
.
The movie was actually started as a short programmer and had modest ‘stars’. The biggest name, Mary Miles Minter, slated to play the heroine Molly, had withdrawn and was replaced by Lois Wilson, a schoolteacher who was only briefly an actress. 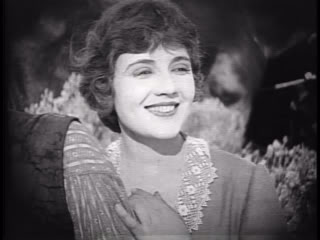 Very charming
.
The lead was taken by J Warren Kerrigan, a formerly popular actor whose star was however on the wane (an offhand remark about his not enlisting when the US entered the First World War went down very badly and cost him popularity with audiences and lack of interest from studios). A year after The Covered Wagon he retired. And much as I like Alan Hale, Sr and Jr, Hale père was not a top star and he turned in an uninspired performance as third-billed rival to the hero and semi-villain. But the film just grew, like Topsy. Additional scenes were added and it became a big-budget epic.
.
. 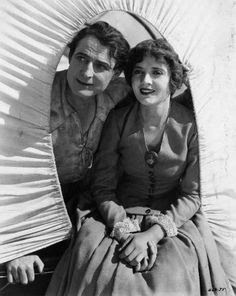 The happy couple
.
The real stars of the show were two non-lead actors, Ernest Torrence as the scout Jackson and Tully Marshall as Jim Bridger. 6’4” Edinburgh-born Torrence was moviegoers’ favorite villain. Marshall was a DW Griffith regular, also well known. Together they were highly entertaining as the earthy, buckskin-clad pioneers, and fortunately they are given a high profile. Marshall played a very similar role in Fox’s The Big Trail in 1930, a movie which owed much to The Covered Wagon. The grizzled scout became a standard in Western movies, and meat and drink to the likes of Walter Brennan and Arthur Hunnicutt.
.
. 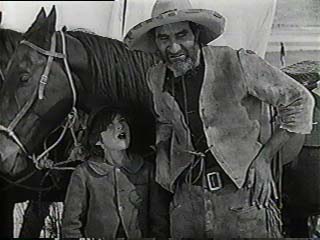 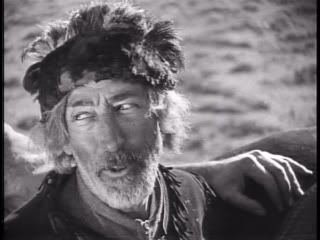 The real stars of the show: Ernest Torrence and Tully Marshall
.
The movie is heavy with symbolism, notably of the plow. Jesse Wingate, leader of the wagon train (Charles Ogle), often grips the handle of his and talks (on the intertitle cards) glowingly of turning the virgin soil of Oregon. Abandoned plows by the side of the trail are a sign of the weakness of those decadent souls who decided on a career panning for gold in California rather than becoming decent farmers in Oregon. It is noticeable that the only settler shown timorously turning back is a man in blackface…
.
. 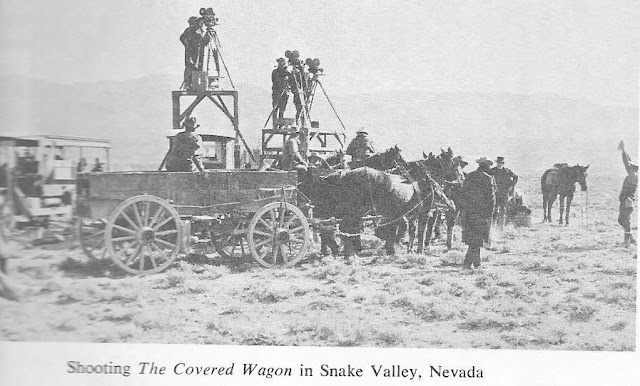 .
The Covered Wagon takes its place as one of the most influential Westerns of all time and contributed enormously to the genre. Of course it was emulated often, and Oregon Trail movies (such as The Big Trail or Fighting Caravans) became commonplace. Other ‘manifest destiny’ epics became increasingly popular, especially at times of American history when patriotism was all the rage. Cruze himself made the The Pony Express in 1925 and in the 1930s and early ‘40s we had the likes of Wells Fargo, Union Pacific and Western Union, all big, even epic films highlighting the nation-building aspect of the ‘conquest’ of the West. Frederick Jackson Turner’s Frontier Thesis was the orthodoxy and was swallowed whole by everyone, including Hollywood. The opening title screen of The Covered Wagon talks about “the lion-hearted men and women who carved a splendid civilization out of an uncharted wilderness.” One character looks approvingly at the little children on the trek and says, “They’ll be the real Empire builders.”
.
. 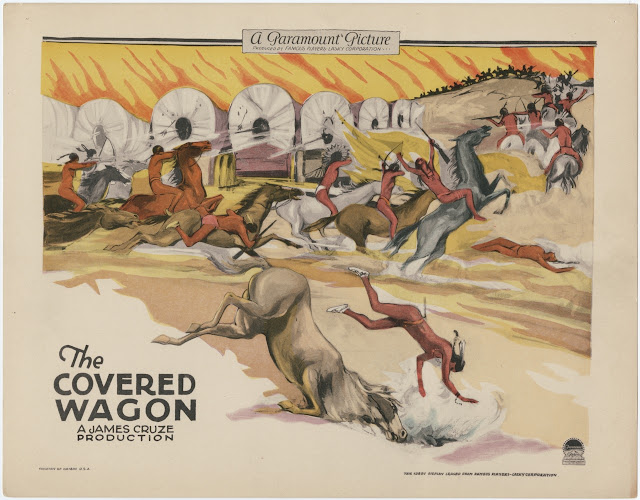 Not perhaps great art
.
There are births and deaths along the way, and a wedding. There’s a buffalo hunt. There’s singing and dancing. And there are all manner of dangers: the spectacular crossing of the River Platte, snow, Indians. There was even to have been a prairie fire, but that scene was cut.The Westerner hero rescues Molly from danger and earns her love. Someone had been reading The Virginian. Or they were referencing one of the movie versions (one came out the same year).
Oh Susannah plays an important part in the tale and we imagine that there were many variations on the theme in 1920s movie theaters as orchestras or humble pianos thumped out their accompaniment.
.
. 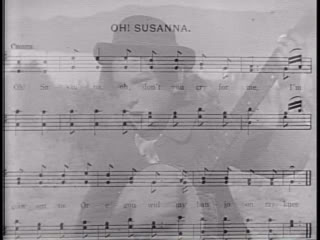 Silent tunes
.
The Covered Wagon is not the greatest Western of the era but it is most definitely worth a watch today, both as a landmark in the history of the genre and as a visual spectacle.