They’ve added an exclamation point to the title, in an attempt to give it a bit of zip.It needed it, rather. 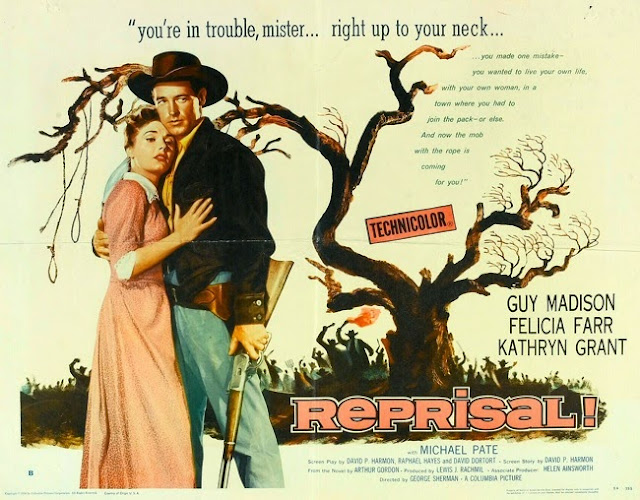 !
.
Columbia produced a lot of Westerns in the 1950s. Well, all the studios did, but Columbia made rather a thing of them. They weren’t junk, either. Many had reasonable budgets, and they often looked good, with attractive ‘Western’ locations and quite classy photography. The studio also used solid directors who knew what they were about. As leads, the actors employed tended to be not out of the very top drawer. Columbia was no high-paying star academy like MGM or Paramount. But Columbia Western heroes were usually solid and reliable.
Guy Madison, though, was one of the slightly weaker of them.  I don’t mean to be harsh but he just seemed a bit bland somehow. Everyone knew him as a ‘safe’ and anodyne Wild Bill Hickok from the TV show which ran pretty well all through the 1950s. But he moonlighted now and then between seasons in bigger-screen Westerns, from Massacre River in 1949 right through to bad spaghettis in the late 60s. See, for example, Bullwhip of 1958.
.
. 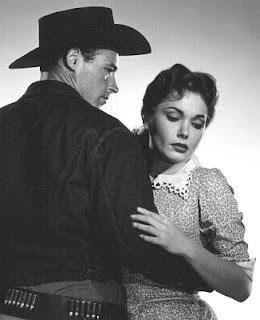 Madison with the talented Felicia Farr
.
In Reprisal! he plays a man who has scrimped and saved and bought a run-down ranch which he wants to make a go of. The Oklahoma town he arrives in is divided into two camps, loathsome types who have a visceral hatred for Indians and more reasonable people who want red and white to live together. Guy tries to be entirely neutral and not get involved. It’s a doomed effort, partly because it is soon revealed (to us viewers, not to the townsfolk) that he is a half-breed and has a Cherokee grandfather (Ralph Moody) who wants to reclaim him for the tribe.
.
. 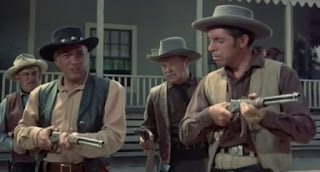 The evil Shipleys get ready to take the ‘law’ into their own hands
.
The poisonous three Shipley brothers who lead the anti-Indian mob are Edward Platt, Michael Pate and Wayne Mallory. Now it’s a bit odd because the ‘Indian’ Madison is blond and Californian and, well, Wild Bill, while ‘white’ Michael Pate is always an Indian. I mean he was Vittorio in Hondo (film and TV). He was Indian Charley in The Tall Stranger, Chief Four Horns in The Canadians, Watanka in Sergeants 3, Puma in McLintock! (another exclamation point Western) Thin Elk in Advance to the Rear, Sierra Chariba in Major Dundee, Sitting Bull in The Great Sioux Massacre, I mean is that enough Indians? OK, I know, he did occasionally take a non-Indian part but still.
.
.

Michael Pate. He was Australian, actually.
.
Of course some early silent Westerns had been pro-Indian, and from Broken Arrow in 1950 onwards, the Fifties rediscovered that Indians were Americans too, with many noble celluloid heroes defending the rights of those who were here before them. But it is rare to find a 50s movie that deals with the utter loathing many whites had for Indians, and paint it in such an uncompromising light. The story is based on a novel by Southerner Arthur Gordon, about the treatment of black people, and transposed to the Western context by David P Harmon (this and the Frank Sinatra vehicle Johnny Concho were his first Western efforts; he worked with director George Sherman again in ’58 on The Last of the Fast Guns). The movie hasn’t the quality of, say, Gentleman’s Agreement on anti-semitism or, in Western anti-Indian key, Devil’s Doorway, but it is certainly trenchant as an anti-racist document.
Although Guy doesn’t want to get involved defending (or assaulting) Indians, we know he is a goody because he smiles at a dog in the first reel. Of course as the movie progresses he becomes increasingly obliged to take the side of decency and take on the Shipley brothers – also because they have designs on his land.
.
. 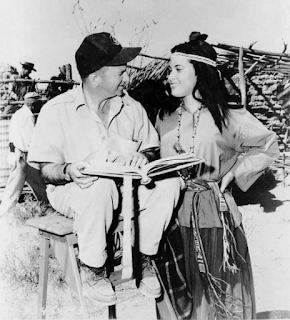 Director Sherman with Kathryn Grant, who was often an Indian maid but never convincing as such

.
It’s noticeable that all the ‘decent’ people of the town (judge, sheriff, heroine) are all pro-Indian while the detesters of Native Americans are generally lower-class types and/or white trash. Still, even the heroine (the excellent Felicia Farr from Jubal and 3:10 to Yuma) at one point disdainfully refers to her putative (Cherokee) rival as a “squaw”, thus revealing her true colors (though sadly for Guy that doesn’t stop his being saddled with her at the end). The heroine’s goody dad (Robert Burton) is misnamed, though. He is Jeb Cantrell. Now everyone knows that Cantrells are villains in Westerns. Take Dark Command or Noose for a Gunman, for example. Cantrell is Hollywood nomenclature for an ex-Confederate guerrilla who turns to outlawry (based on Quantrell). Surely the writers knew this and should have avoided this blunder. I mean, doh.
There is a travesty of a trial when a callous and prejudiced jury doesn’t even bother to deliberate before freeing the murderers and joining them at the bar. Sherman did subverted-justice courtroom scenes, as The Tulsa Kid in 1940 had proved. The film is also notable for a gruesome depiction of mob violence and how easy it is to stir ‘ordinary’ people up to a lynching with no hard evidence whatsoever that the lynchee committed the crime. Guy escapes the noose by the skin of his teeth but only because the Indian maid (Kathryn Grant, about as Indian as I am and with a good deal more lipstick) lies and gives him an alibi. The alibi is a two-edged sword because she says he was with her all night, and OK, he avoids swinging from a tree but the looks on the faces of the people (pro- or anti-Indian) as they regard him with distaste are almost as bad.
.
. 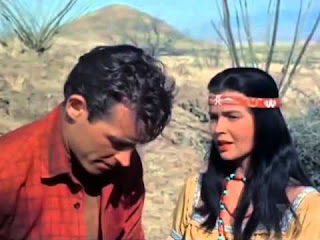 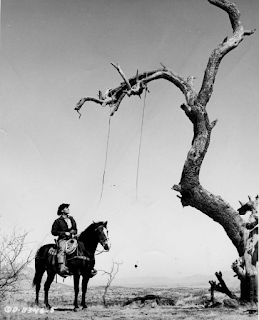 Sinister
.
Well, there’s a fair bit of shootin’ and the good guys win out but everyone in town is left with a sour taste in the mouth, and we viewers are a bit, too.
The pace is too slow, the writing on the plodding side and the acting pretty wooden. But there are some nice Old Tucson locations and pretty photography here and there by Henry Freulich. What it really needed, though, was Anthony Mann or Delmer Daves to direct and someone with more oomph (Coop, ideally, or if not, Peck, say) to star.
Watchable, but no great shakes (!)