Watching Roy Rogers movies today is not at that all easy. The word cheesy hovers dangerously in the air. But of course in those innocent days of yore his pictures were enormously popular. As a boy, born in the year Under California Stars was made, I grew up not caring much for singing cowboys. I was much more at home with the grittier 50s Westerns aimed at adults. Songs had little place in oaters, I thought, and even at that tender age I could tell that the duds that Autry, Rogers & Co. wore were far too fancy. Worst of all, for me, was the contemporary setting, with automobiles and telephones and so on. No, these ‘Westerns’ wouldn’t do.
And Roy looked a bit weedy, don’t you think? He was too slender and those slanty eyes were odd. Still, there’d no denying he was a giant in the history of the genre. And he still has legions of fans. I wouldn’t want to offend them. So I’ll be nice to this film.
.
. 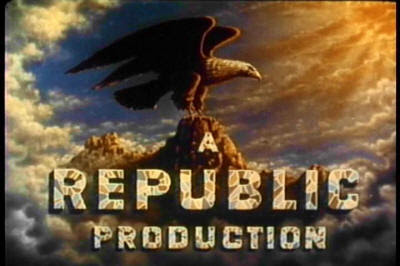 .
Actually, Roy’s late-40s efforts had quite high production values. Republic wasn’t MGM but it wasn’t Poverty Row either and there was some budget available, even under famed cheapskate studio boss Herb Yates. For one thing, these pictures were in Republic’s Trucolor process. Where other singing cowboys had to do with black & white second features of an hour (or less), Roy’s films were 70-minute bright color epics with quite fancy sets (in this case Roy’s rather plush ranch home). The DP was Jack Marta, Republic go-to for Autry and Rogers Westerns, who knew the game backwards and also shot some big Westerns like Dark Command and, later, Cat Ballou.
For another, although these were very much family fare, the Rogers movies at this period were actually quite tough. In this one, beneath the heart-warming and folksy dialogue (how I dislike heart-warming movies) there was a plot of murder, double-crossing and even a threat to kill Trigger! Yes, the villains kidnap the Smartest Horse in the Movies. Of course, they deserve everything they get but that everything includes death from lead poisoning. And Roy’s fisticuffs with the bad guys (or Roy’s stunt doubles anyway, with the bad guys’ doubles) are really quite down-and-dirty. California Stars could hold its head up as a proper Western. Almost.
.
. 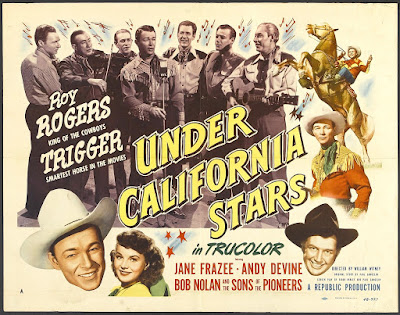 .
And then Andy Devine was doing his sidekick act again and that’s always a plus. In the story, he’s the one who writes the title song of the movie (though his singing of it at the piano is hilariously bad) and Roy hires him to come to Hollywood and write his songs. There’s shtick about all the ranch hands being cousins of his. One of them is rather gorgeous cousin Caroline (Jane Frazee). Dale isn’t around, you see, though she and Roy were married by this time. The Roy/Caroline relationship is very chaste but they do sing Andy’s song together, and she had a bright, pretty voice to add to Roy’s pleasant tenor (for he really could sing). That song kinda sticks in the head and I bet a lot of the patrons came out of the theaters in ’48 happily whistling the tune.
.
. 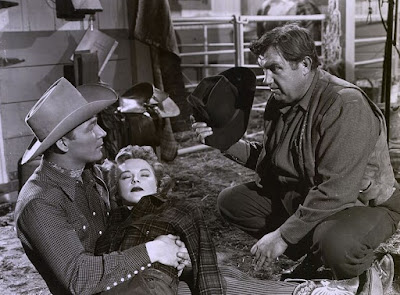 She has fainted because she saw a mouse. Oh, those innocent days of yore.
.
Another cousin is a small boy, Ted (Michael Carver) and this lad has a wicked stepfather, obviously (Wade Crosby). After an accident the stepdad won’t pay for an operation on the boy’s leg (in those pre-PC days he is referred to as a cripple). Worse, this stepfather is in league with the local horse buyer Pop Jordan (George Lloyd) and a henchman named Ed (House Peters Jr, rather good as a thug, in fact) who brutally round up wild horses on the range and sell them for glue (Do you think the makers of The Misfits had seen this film? No, you’re probably right). But they abandon this heartless scheme (Roy’s fists help) and get the brainwave of holding Trigger to ransom instead. They horsenap the palomino while Roy is singing on the radio. Luckily, the boy is of the kind that used to be called plucky, and he helps save the day (and Trigger). Such infants in these Westerns were ideal for 90% of the audience to identify with.
Another reason for the (relative) quality of this movie was that Republic had William Witney direct it. Witney had started at Mascot doing serials and when they merged with Republic he continued there. He really knew his craft. He did his first Rogers flick in 1946 and never looked back. California Stars was just one of six Roy Rogers pictures he did in 1948 alone – amazing, really. Late in life Witney wrote two books, In a Door, Into a Fight, Out a Door, Into a Chase (about his serial-directing career) and Trigger Remembered. They make entertaining reading.
.
.

.
The Sons of the Pioneers are there, naturally. Amazingly, I believe they are still going. Of course none of the original line-up is still alive but still. That close-harmony 1940s ‘Western’ singing does have a certain charm, especially when Roy joins in.

Trigger obviously does his bit. At one point he helps a cowhand win at poker by advising him which card to play.

Oh, and there’s a great dog, Tramp (Tramp). He also helps save the day. He’s a proper mutt, all shaggy (not like my beautiful hound Wyatt).
.
. 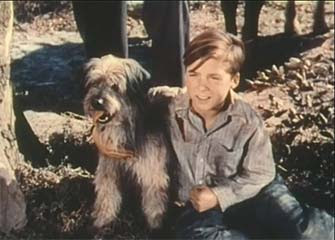 Excellent pooch
.
Yup, I have to say it, this film is recommended.
PrevPreviousThe Badge of Marshal Brennan (AA, 1957)
NextFort Defiance (UA, 1951)Next